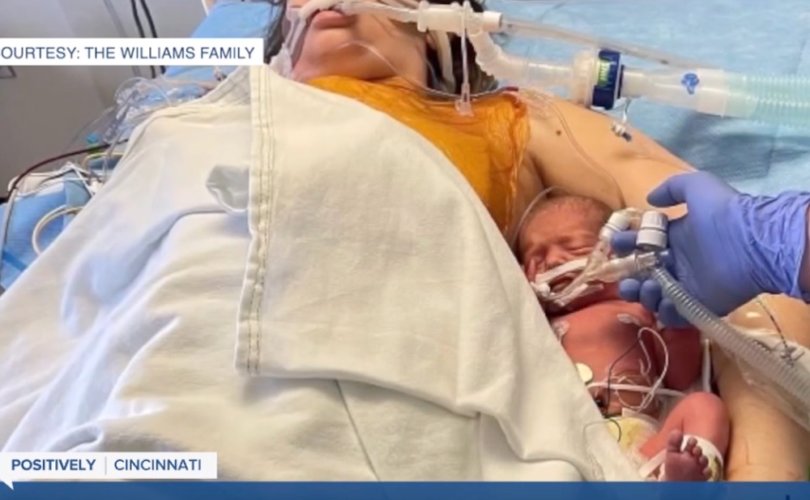 EDGEWOOD, Kentucky (LifeSiteNews) – First-time mother Veronica Williams’ heart was failing after giving birth to her premature baby until her baby girl was placed in her arms.

On March 9, doctors believed Kentucky mother Veronica Williams might die after she underwent an emergency caesarean section to deliver her premature baby. But when her baby girl was placed in her arms, Veronica began to recover, WCPO News reported.

“We believe God performed a true miracle by His power and through the many wonderful medical professionals who worked tirelessly treating Veronica,” Veronica’s father-in-law, Sean Williams, wrote on a GoFundMe page created to help the family with medical bills.

At 32 weeks pregnant, Veronica, who is 26 or 27 according to information on the GoFundMe page, began struggling with shortness of breath and a rapid heart rate. Doctors at St. Elizabeth Edgewood Hospital diagnosed her with “myocarditis and was initially given less than a 50% chance of survival.” Myocarditis is inflammation of the heart.

Accordingly, Veronica had an emergency caesarean section. Her baby, Brooklynn, was born eight weeks early. After the birth, a team of heart doctors and a team of neonatal doctors worked tirelessly to save the mother and her baby.

As doctors worked on Veronica, whose heart was “completely weak from the inflammation” and even stopped for a moment, baby Brooklynn was being given breathing assistance in the neonatal intensive care unit (NICU) as her lungs were not yet fully developed.

Believing that Veronica would soon die, doctors placed Brooklynn in her mother’s arms for what they believed would be the last time. However, the baby’s presence revived her mother, whose vital signs improved significantly.

“They brought her up to me…when they weren’t sure if I was gonna make it or not, and they laid her in my arms,” Veronica told WCPO. “I don’t remember it, but they did do that.”

“It was probably a moment none of us will ever forget — just the vital sign reactions of mom and baby,” St. Elizabeth NICU Manager Keri Hinson added.

“And I don’t think there was a dry eye in the station,” Lindsay Calderon, cardiac surgery recovery nurse manager, said. “And getting to actually watch it and be a part of it … was an amazing feeling.”

According to Sean, the family is doing well and expresses gratitude to the hospital staff who helped save both mother and baby.

“First of all, the family still needs your prayers as the doctors say it will be a marathon, not a sprint, for Veronica to recover fully. However, we trust that God will restore her just as He healed her,” he added.