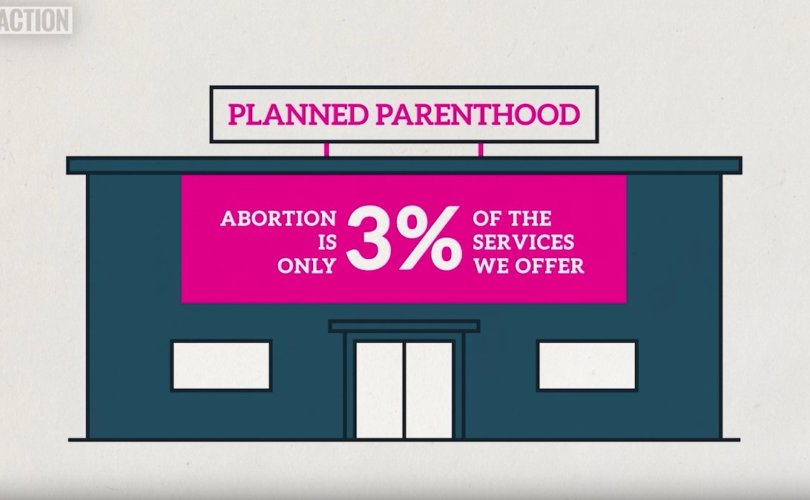 September 14, 2016 (LifeSiteNews) – For years, Planned Parenthood has tried to bolster its public image by saying that abortion “is only three percent” of its activities. Now, a new video from Live Action explodes that myth, exposing the sleight-of-hand the nation’s largest abortion provider uses to artifice such a low number.

According to its most recent annual report, in the 2014-2015 fiscal year Planned Parenthood performed 323,999 abortions and saw a total of “approximately” 2.5 million patients – not all of whom are women.

That’s one abortion every 97 seconds.

That also means that one of every eight patients will have an abortion – making the percentage of abortions Planned Parenthood performs more than four times higher than it commonly reports.

“To justify its half-billion dollars in taxpayer funding, Planned Parenthood downplays abortion – falsely claiming that it only makes up three percent of its business – and instead plays up its cancer screenings and so-called ‘women’s health care.’  However, Planned Parenthood’s own numbers prove it’s an abortion corporation, focused on abortion, not on women’s health care.  Planned Parenthood doesn’t perform a single mammogram, and it performs less than two percent of all women’s cancer screenings in the United States, yet it commits over 30 percent of America’s abortions,” said Lila Rose, the president and founder of Live Action.

Although Planned Parenthood advertises that it performs “breast exams,” whose medical value is disputed, the abortion provider performed 123,226 fewer breast exams during the most recent fiscal year than it had in the previous year.

Instead, abortion makes up the vast majority of Planned Parenthood’s non-governmental revenue.

The new Live Action video points out that these other services ignore the fact that abortion is the group’s raison d’etre. “It would be like the NFL saying that because they sold 5 million hot dogs in a season and there were only 256 football games, football is only 0.005 percent of what they do.”

“Planned Parenthood is an abortion corporation,” the new video says.

Expanding its “services” reveals that a much higher percentage of Planned Parenthood’s activities have the potential to induce an abortion.

The abortion giant has been accused of serial Medicaid fraud for charging taxpayers for procedures performed in the process of performing an abortion, as though it were a stand-alone procedure.

“Planned Parenthood is so focused on abortion that it aborts 160 children for every one child it refers out for adoption. If a woman with an unwanted pregnancy goes to Planned Parenthood, that child is 160 times more likely to be poisoned or dismembered than to be put up for adoption to a waiting family,” Rose said.