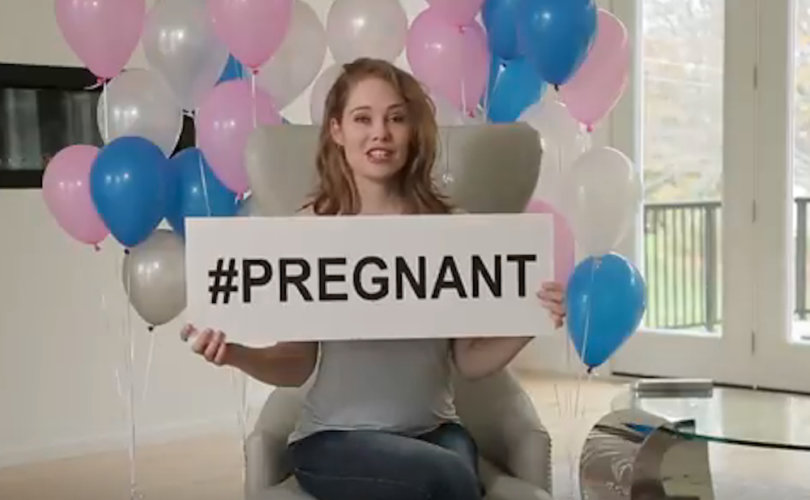 Laura Klassen, the founder and director of the Canadian pro-life organization Choice 4 2, released a snarky video highlighting the flaws of this common pro-abortion slogan.

Klassen begins the video, “There’s a body inside my body.” She holds up a sign that says “pregnant.”

“I think that now is the perfect time to address ‘my body, my choice,’” said Klassen. “The problem with this catchy little phrase is that it’s wrong, because science. I’m gonna get really scientific on you for a second, so bear with me.”

“My body does not have two heads, four arms, or 20 toes – just saying,” she explained. “If I were to get an abortion right now, I wouldn’t be aborting my own body. I’d be aborting the body inside my body.”

Rather than eliminate the phrase “my body, my choice” altogether, Klassen suggested it be updated to “reflect reality.”

“Instead of ‘my body, my choice,’ what we should be saying is, ‘our bodies, my choice,’” she proposed. “Because when you’re pregnant, as the larger, stronger body, it’s totally up to you about what happens to the smaller, weaker body inside your body.”

“Because that’s fair,” she sarcastically continued. “That’s what human rights are all about. So there you go. ‘Our bodies, my choice.’ It might not sound as nice, but at least it’s accurate.”

When a mother chooses abortion, “she's choosing for two,” Klassen said in a blog post. “She's deciding the path her own life will take, but she's also deciding whether or not her pre-born child will even get his/her chance at life.”

“‘My body, my choice’ is out of date and it's just wrong,” she said. “It completely ignores the other body involved in a woman's pregnancy: her innocent baby's body. People use the word ‘choice’ to gloss over the fact that a human being is killed in an abortion.”

The way wanted babies in the womb are acknowledged by modern society shows the inconsistency of the pro-abortion stance.

Clear and even 3D ultrasound images show the whole, distinct, living human being that grows bigger and bigger in his mother’s womb.

Social media has made clever and life-affirming pregnancy and “gender reveal” announcements popular and widespread.