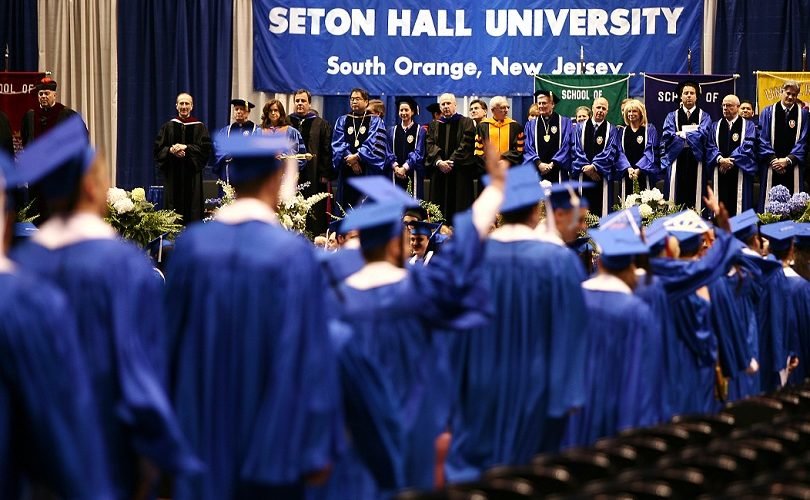 SOUTH ORANGE, NJ, May 18, 2015 (LifeSiteNews.com) – A priest in campus ministry leadership at one of the nation’s oldest Catholic universities lamented on social media last week that he was fired for his public opposition to the Catholic Church's teachings on marriage.

Seton Hall University Director of Campus Ministry Father Warren Hall tweeted Friday that the university discharged him because of a Facebook post he made in support of the pro-homosexual “marriage” NOH8 Campaign.

“I’ve been fired from SHU for posting a pic on FB supporting LGBT 'NO H8,'” Father Hall said via Twitter. “I’m sorry it was met with this response. I’ll miss my work here.”

The online “NOH8” campaign began in 2008 in opposition to California’s Proposition 8 marriage protection amendment, accusing its supporters of being hatemongers.

However, the Archdiocese of Newark, which oversees the university and thus its campus ministry, disputed Father Hall’s claim of being fired, and Father Hall’s profile remained on the Seton Hall Campus Ministry webpage as of press time.

“Fr. Hall's assignment is ending in June,” Archdiocese of Newark Director of Communications James Goodness told LifeSiteNews. “As a priest of the Archdiocese, he is available for a new assignment after the completion of this one. There's been some confusion and misperception about the issues surrounding his tenure ending at the university.”

The archdiocese also clarified Church teaching on marriage, and how Father Hall’s public support for the NOH8 Campaign would cause misunderstanding of Church principles.

“Fr. Hall was promoting an organization that has as one of its principal agenda items the promotion of same-sex unions,” Goodness said, “which conflicts with Catholic teaching.”

“Pope Francis has said that marriage is a union of man and woman,” he told LifeSiteNews. “This will not change. Continued promotion of this organization's agenda creates confusion over the clarity of Catholic teaching.”

The misperception of Catholic teaching on marriage continued to play out in New Jersey in the days following Father Hall’s Friday tweet.

There was substantial Seton Hall student reaction to the tweet, according to May 16 a post on the Setonian website, with more than 230 retweets and 150 favorites. The student tweets covered by the Setonian all condemned Father Hall’s purported firing.

“Catholicism is based on a foundation of love. Love includes acceptance and seeking to understand. Make things right @SetonHall @Warrmeister,” one student said. “Ashamed to be a Seton Hall student,” said another.

“Outraged at @Seton Hall for dismissing @Warrmeister,” student Ethan Kraft tweeted. “Certainly not what Christ would have wanted, and not in line with the words of @Pontifex.”

Kraft further referenced the frequently misinterpreted Pope Francis quote, “Who am I to judge,” in the change.org petition he set up to call for Father Hall’s reinstatement on Friday. Kraft also claimed on the petition site that removing Father Hall for his support of homosexual “marriage” was not consistent with Christ’s teaching.

“This action is not in line with the teachings of Jesus Christ, nor is it line with the words of Pope Francis, current leader of the Roman Catholic Church,” Kraft said. “Please sign this petition to show your support for Father Warren Hall, a university priest well-loved by students.”

“[Pope Francis] has reaffirmed church teaching on the sanctity of marriage,” Goodness said in a report from PolitickerNJ.com. “What the popular opinion is, it’s not in sync with what the Holy Father has said. That change.org petition is incorrect.”

Father Hall’s tweet has been deleted, but later on Friday he tweeted again on the matter, saying, “Grateful for all the support. Don't be angry!! Turn this into an opportunity for open/reasonable discussion on LGBT issues on a Cath[olic] Campus.”

The university has not officially commented on Father Hall, and instead referred people to the Archdiocese of Newark both in a statement and on Twitter.

“Seton Hall University does not comment on personnel matters,” Seton Hall spokeswoman Laurie Pine said. “The Archbishop of Newark appoints the Director of Campus Ministry, who serves at his discretion.”

At one point, the university took to Twitter, telling student Ethan Kraft, “We understand how you feel; however, the Archdiocese of Newark appoints the director of Campus Ministry at Seton Hall.”

The university has exhibited support for homosexual “marriage” in the past.

Seton Hall first began offering a homosexual “marriage” course taught by a pro-homosexual professor who opposes Church teaching on homosexuality back in 2010. That earned the university criticism from Newark Archbishop John Myers.

“This action is totally contrary to the teachings of Jesus Christ and the most recent statements by Pope Francis,” Democrat State Senator Ray Lesniak said. “It’s totally out of step not only with the way that the country is going, but with the way the leadership of the Catholic Church is going.”

“On some issues, we don’t necessarily agree with the Church, but we still consider ourselves Catholics,” Codey said. “Father Hall should be put back into a place where he can tend to his flock, regardless of their sexual preferences.”

In the archdiocese’s statement to LifeSiteNews, Goodness reaffirmed Church teaching, also the archdiocese’s position, in regard to the dignity of all human life. To that end, Father Hall is correct in opposing any discrimination against those suffering from same-sex attraction, he said.

“At the same time, Fr. Hall has correctly called for non-discrimination of people with same-sex attraction, and for ensuring that all individuals, regardless of sexual orientation, are treated with dignity and respect,” Goodness said. “All human life has value – another long-held Catholic teaching. In fact, Archbishop John Myers of Newark in his pastoral on marriage in 2012 specifically cited the Church's teaching on the need to ensure that all are treated with respect and dignity.”