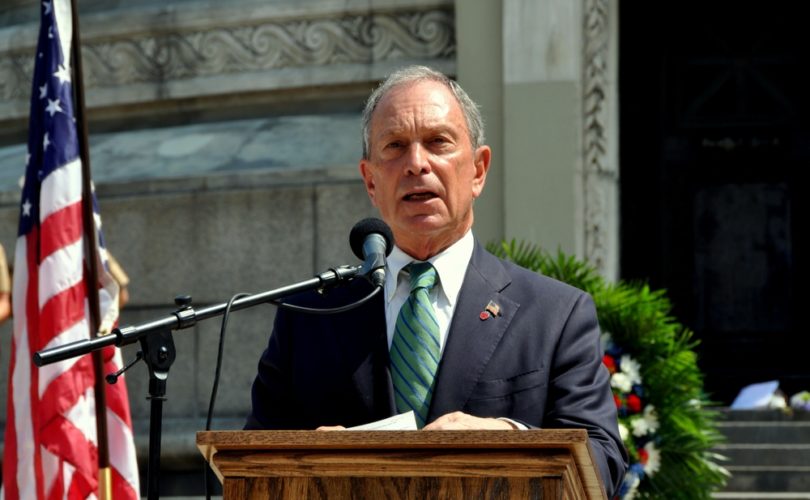 NEW YORK, February 11, 2016 (LifeSiteNews) – He's an upwardly mobile, socially liberal billionaire whose political affiliation has changed numerous times over the years. He's teased numerous presidential campaigns in the past, but this time he's talking like he's serious. And no, he's not who you think he is.

Michael Bloomberg, who served three terms as mayor of New York City, has confirmed to media sources that he is considering running for president as an independent in 2016.

Bloomberg told told the Financial Times this week that he finds American political “discourse and discussion distressingly banal and an outrage and an insult to the voters,” and that he's “looking at all the options.”

The 73-year-old tycoon was a registered Democrat before switching parties to run in the less contested Republican primary in 2001. He became a registered independent in 2007.

As mayor, Bloomberg governed as a social liberal who strongly supported abortion and the LGBT political agenda.

In 2011, Bloomberg signed a controversial gag order directed at crisis pregnancy centers. A year later, he endorsed Barack Obama's re-election, saying that abortion-on-demand is part of “the world I want to leave my two daughters, and the values that are required to guide us there.”

After leaving office, he received Planned Parenthood's Global Citizen Award at its annual gala on March 27, 2014.

Jeb Bush sat on the board of the philanthropy, which also strongly supports Common Core educational standards, at the time.

His strong emphasis on health regulations, such as attempting to ban soft drinks larger than 16 ounces, did little to enhance his popularity and were deftly parodied by Sarah Palin. (A state court struck down the proposed regulation.)

His $50 million gun control crusade dissipated after his cause failed in state after state.

The financial heft he could bring into the race, as well as his quirky politics, has tempted Bloomberg to enter presidential politics in the past. He considered a presidential run in 2008 and thought more strongly about a third party bid in 2012, after hosting the inaugural convention of the “No Labels” movement in New York City in 2010, but he backed off each time after not seeing a viable path to victory.

With an estimated fortune of $39 billion, he has said he would be willing to spend more than $1 billion on his campaign in 2016 – but he would only enter the race if the Republican Party nominates Donald Trump or Ted Cruz, and the Democratic Party nominates Bernie Sanders.

He called Jeb and Hillary Clinton “two quality” candidates and “the only two who know how to make the trains run.” Jeb reciprocated last month, telling CNN that Bloomberg is “a good person, and he’s a patriot and wants the best for the country.”

At least one of his competitors is eager to see Mike run. “I hope he gets into the race,” Donald Trump told Greta Van Susteren on Fox News Wednesday night. “I'd love to compete against him…I would love to see Michael in the race.”

That is likely because polling shows Bloomberg would draw most of his support from the Democratic candidate. “Although he is characterized as the New York counterpunch to Trump, Mayor Mike Bloomberg is more the nemesis of Bernie than he is of Donald,” said Tim Malloy, assistant director of the Quinnipiac University Poll.

Bernie Sanders would defeat both Trump and Cruz in a head-to-head match, according to Quinnipiac. But if Bloomberg entered the race, he would win 15 percent of the vote largely from Sanders, giving Trump a one-point victory in the popular vote (and narrowing Cruz's loss to one point).

However, he could throw a major wrench in the Democrats' electoral college total, according to columnist Pat Buchanan.

“Not only would Bloomberg lose the Big Apple, his statewide vote would come mostly from the Democratic nominee, giving Republicans the best opportunity to carry the Empire State since Ronald Reagan coasted to re-election in 1984,” wrote Buchanan, who served as White House communications director during Reagan's second term.

“It’s not beyond imagining that he could get in and have an effect on the race,” Sen. Sheldon Whitehouse, D-RI, told The Hill.

His entrance into the race would be a true injection of “New York values” – making him the third or fourth New Yorker in the race – alongside fellow billionaire Trump from Queens, the Brooklyn-born Sanders, and onetime New York Senator Hillary Clinton.

Annie Linskey, a reporter for the Boston Globe who once worked for Bloomberg, told Fox News on Monday that there is “about a four” percent chance that Bloomberg will run.