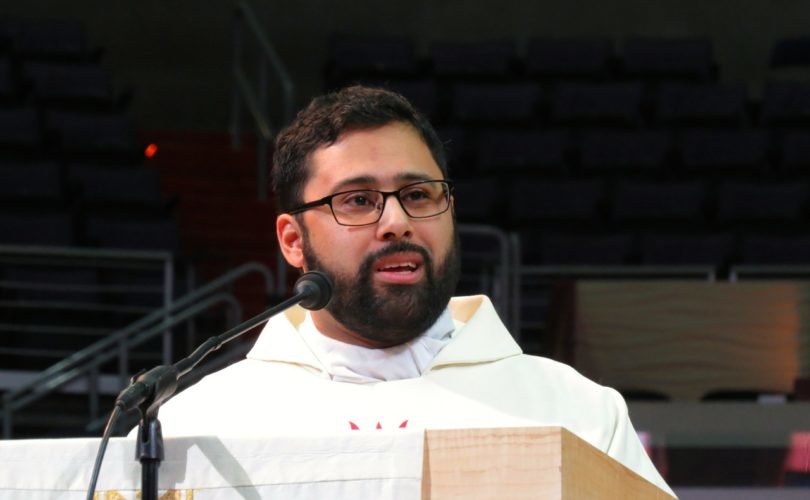 As he grew older, Fr. Majano believed a hero to be someone who put themselves in harm’s way for others, he said during the Verizon Center Mass for Life in Washington, D.C. Attended by Cardinals Donald Wuerl and Timothy Dolan, and papal nuncio to the United States Archbishop Carlo Maria Viganò, the event drew about 15,000 young people.

Fr. Majano related at the January 22 event how he happens to know just such a hero, a woman who “against all obstacles, against all trials, stood firm, and would not budge, would not move from what her beliefs were, when everything else in her life seemed to sway.”

The first of three major trials came for this woman while she was a high school student and was raped and became pregnant.

“Her family just let her be. She felt totally alone, [with] nowhere to go. [She was] practically disowned,” said Fr. Majano, who is the parochial vicar at our Lady of Sorrows Church in Takoma Park and the Archdiocese of Washington’s assistant director of priest vocations.

A friend told the woman she “shouldn’t be going through this” and that she “didn’t deserve this” since she did not have any support.

“This is impossible for you,” the friend said. “Just take the practical solution. Abort.”

But the woman responded: “I cannot face the rest of my life knowing that I have taken this one [life] from someone,” Fr. Majano related.

The woman said ‘no’ to abortion, and ‘yes’ to life, he said.

For a second time the woman found herself facing a trial, this time with a pregnancy from a man she loved but who had not committed to marriage. Her family urged her to abort and not take the risk of raising now two children without a father. They coaxed the woman, offering to “pay for everything.”

“For a second time, she was forced to look at this reality, look at her life and say: ‘It’s not perfect still. I’m not sure what my future holds. But…’ she said: ‘…No, I can’t, no matter how genuine, how full of love, and [how] well-intentioned that suggestion was.’ She said ‘No’ once again. ‘No’ to abortion, and ‘Yes’ to this life that was growing within her,” related Fr. Majano.

Thirteen years later, the woman now happily married, found herself facing yet again another trial, becoming pregnant during an intensive regime of chemical treatment for cancer.

Doctors despaired of the new life within her. “Because the medication was so strong, there is zero chance that this child will be born normally,” they told her, and suggested abortion as the only way forward.

“Normal or not, this is something I cannot, I will not do,” she told them.

“[She said] ‘No’ to that abortion, and ‘Yes’ to that life that was growing within her,” Fr. Majano said.

“Against every circumstance, against every setback that she experienced, this woman stood firm. I find that heroic,” said Fr. Majano. “This type of heroism is largely unsung in our society. And so we sing it today. We praise her.”

The next words uttered by the priest sent a shockwave throughout the entire stadium.

“And to this woman, for her valiant effort, for constantly staying firm, and focusing on her steadfast love for what life is, I simply say: ‘Thank you Mom! Thank you very much!’”

The entire stadium broke into applause. When Fr. Majano pointed out his mom in the audience, the entire body of priests, bishops, cardinals, and the papal nuncio on the center stage arose clapping exuberantly to acknowledge her heroism. About 15,000 excited young people joined them in the standing ovation.

“We need to sing this type of heroism,” Fr. Majano said.

Rosa, 53, told LifeSiteNews after the homily that Fr. Majano was her second crisis pregnancy. The choice she faced was either going to college or having the baby.

“He’s my college degree, right there,” she said, all smiles.

Rosa, a mother of four daughters and one son, said that she can now clearly see that God had a plan for her son. “I never thought that he would become a priest,” she said. “It shows to me very clearly that God had chosen him, from the womb.”

To any woman facing a crisis pregnancy she would say: “Do not give up, God has a plan…always. God will never leave you alone.”

Fr. Majano encouraged the young people to stand up for life.

“We’re here defending that life. We’re simply here to champion the cause for those who have no voice, who have not had our opportunity,” he said.

In a comment to LifeSiteNews Tuesday, Fr. Majano said his priestly vocation is “rooted in my mother's yes.”

“Without it how could I have had the opportunity to discover God's plan for me,” he explained. “But beyond that, I believe my mother's character which led her to be so steadfast in this decision also affected the way she raised us. I remember from an early age that my mother's go-to place in times of need was the Church and by example always showed that God was essential to our lives no matter the situation. This definitely provided good ground in my life for the vocational message to sink in.”

For more of LifeSiteNews' in-depth, original coverage of the 2015 March for Life in Washington, D.C., click here.