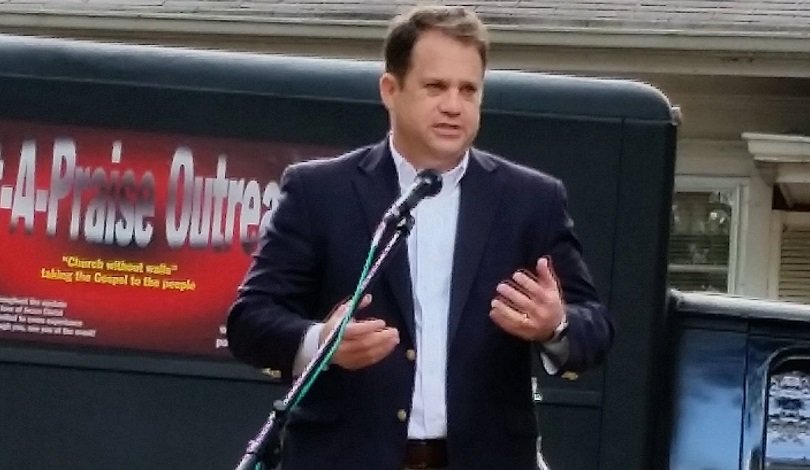 CHARLESTON, SC, May 15, 2015 (LifeSiteNews.com) – A South Carolina legislator is blocking a bill he had supported to end abortion at 20 weeks, because other lawmakers added an exception in the case of rape or incest.

Republican State Senator Lee Bright stood up to oppose the 20-week abortion ban from the floor Thursday, saying exceptions for rape or incest victims would unjustly sentence an unborn child to death for the father’s crimes.

“I’m going to stand in the gap for that child that you don’t think deserves a right because his father is a criminal,” he said in the senate on Thursday, according to a Greenville Online report. “Baby Doe, that child who we’ll never meet, is going to have a trial today. And we’re going to decide if it’s guilty of a capital offense because its father was a criminal.”

Pro-life advocate Rebecca Kiessling praised Bright for standing up against rape and incest exceptions in the South Carolina bill.

“Senator Lee Bright is a hero to me and to the multitudes of others from my organization Save The 1 who were also conceived in rape or mothers from rape,” Kiessling told LifeSiteNews. “He gets it – you punish rapists, not babies. How hard is that to understand?”

Too often, she said, children conceived in rape or incest are treated by politicians as “bargaining chips.”

Bright said he wouldn’t let the amendment pass, and he could persist in opposing the bill through the duration of the session, which ends June 4. “I can go nine [legislative] days,” he said. “It’s a battle of wills.”

Ironically, this kind of filibuster is exactly what legislators hoped to avoid when they watered down the bill.

The legislation, sponsored by Republican Representative Wendy Nanney, passed the House earlier in the year with exceptions for the life and physical health of the mother, but not for rape, incest, or severe fetal anomalies. Those provisions were added later as part of a compromise aimed at easing opposition to the bill and avoiding a filibuster from its opponents.

“I’m not comfortable with the exceptions,” said Grooms. “But if we can’t save them all, let’s save what we can.”

Without the exceptions, the Senators said, the legislation faced 400 amendments from opponents, meant to doom the proposal. Debating the amendments would have likely consumed the rest of the remaining time in the legislative session next month.

Grooms criticized Bright, “the very senator who likes to proclaim himself the most pro-life senator in this body,” for stalling the bill.

Grooms made a motion two times for Bright to sit down during the Thursday filibuster, but the motions failed to reach the necessary two-thirds vote. Bright picked up with the filibuster again on Friday and plans to resume again next week with the bill back before the Senate.

Citizens for Life, a South Carolina-based pro-life group, has endorsed the legislation and is asking legislators to pass it, even as amended. Supporters of the South Carolina bill say it is likely dead for the session.

Grooms said if Bright continues his filibuster and kills the bill for the year, it will cost “20 babies” their lives.

But Kiessling said, “If this bill fails, then the blame squarely falls with the other Senators who insisted upon the cowardly practice of punishing babies instead of rapists.”

The controversy mirrors a larger fallout over the Pain Capable Unborn Child Protection Act in the U.S. House of Representatives. Rep. Trent Franks, R-AZ, introduced the bill without any exceptions, but since defeated Majority Leader Eric Cantor panicked and added the rape and incest exceptions after Franks made an inconsequential verbal faux pas. The bill passed the House in June 2013 and again this week, with the exceptions intact.

Kiessling, who is a lawyer, said adding exceptions leaves such bills open to a legal challenge.

“If this bill were to pass with a rape exception, then there would be grounds for us filing an Equal Protection claim under the 14th Amendment,” she said. “Keeping bills free of discrimination is a sound constitutional practice.”

In the conservative Southern state, Bright has an immaculate pro-life and pro-family voting record. He challenged Republican U.S. Senator Lindsey Graham in the 2014 Republican primary. Bright has fought abortion exceptions in the past in the South Carolina legislature. He was also part of a group that filed personhood legislation last December, and he also filed a joint resolution last month for personhood to be put on the 2016 ballot for a constitutional amendment.

He also suggested that U.S. District Judge Robert Shelby, an Obama appointee, should be impeached for striking down Utah's marriage protection amendment.

Bright is now one of three state co-chairs for Ted Cruz's 2016 presidential campaign.

I used to be weak in opposing rape and incest exceptions. I’m not anymore.