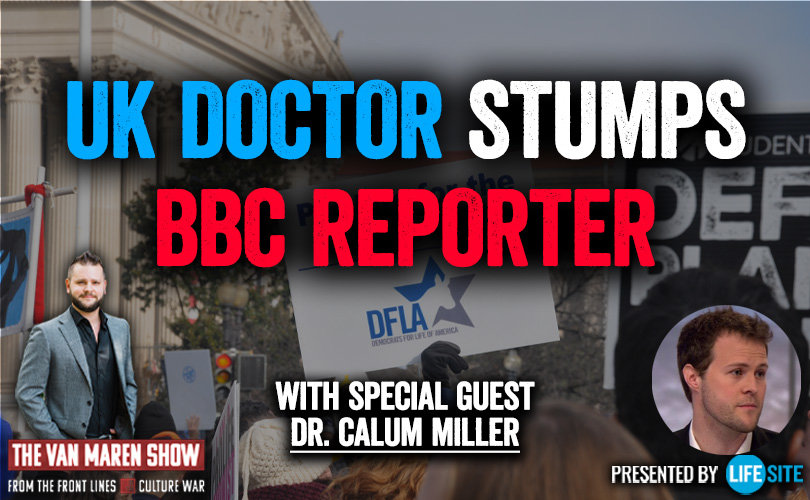 (LifeSiteNews) – In today’s episode of The Van Maren Show, Jonathon spoke with a pro-life activist and doctor from the UK whose interview in September with a BBC reporter on the Texas Heartbeat Act went viral.

Dr. Calum Miller has regularly appeared on the BBC and other mainstream news outlets, where he has defended and argued for the pro-life cause.

He sat down with Jonathon to explain the interview earlier in the fall where the BBC journalist appeared biased and hostile to Miller’s views on abortion and the Texas law, but is at the end stumped and dismisses her guest.

In the podcast, Dr. Miller also gave some suggestions for pro-lifers to argue effectively, he spoke about the state of the pro-life movement and abortion laws in the UK, and he discussed how to stand for the unborn even when it might be difficult to do so.

Miller stated that it’s important for pro-lifers when having conversations around abortion, for example in the cases of rape and incest, to be prepared to respond to questions in a way “that is winsome, that is honest, and that is sincere.”

He also added that highlighting and describing the reality of abortion “will go a huge way in educating people and in showing that this is something that they have to take seriously.”

The British doctor and ethicist from Oxford University detailed the UK’s stance politically regarding abortion. He said that, unfortunately, pro-life support from politicians is subtle and not in the open, and many parties are declaring themselves open only to pro-abortion members.

“I would encourage our politicians to be a bit more outspoken,” Miller stated. “They can probably get 95 percent as many votes if they just came out and said pro-life and they wouldn’t alienate very many people.”

Lastly, Miller called on people to stand up for the unborn if it means having to lose something. For him, a medical doctor and former student in one of the top schools in the world, he decided to speak up for the preborn “to stop this dehumanization that’s so prevalent.”