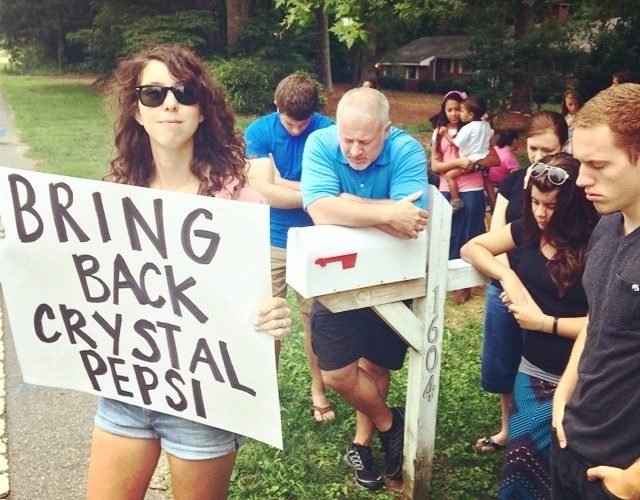 Tina Haver Currin and her husband, Grayson, have become heroes in the feminist blogosphere for mocking pro-life counselors who oppose abortion. But the feminist couple, who spend their Saturdays holding irreverent signs in the midst of sidewalk counselors in North Carolina, do not approve of killing in every case: They raise money for a no-kill cat shelter and have an abiding concern over “the ethics” of eating meat.

Tina, a “creative strategist” at Myriad Media and former English teaching assistant at UNC-Chapel Hill, is a self-described “atheist” with a penchant for “black metal” – a genre of heavy metal music extolling Satanism, with occasional ties to the neo-Nazi movement. She met her husband, Grayson, through a friend and bonded over their love of similar music.

She says she and Grayson were driving past A Preferred Women's Health Center, a chain of abortion facilities with an office in Raleigh, in March when the sight of pro-life sidewalk counselors angered them.

They began documenting their shenanigans on their blog, Saturday Chores, and soon they received profile pieces in Cosmopolitan and The Huffington Post. The executive director of NARAL Pro-Choice North Carolina, Suzanne Buckley, recently sent Tina “a *heartfelt* thank-you” for her efforts.

“It's true that we're mocking people,” Grayson Haver Currin – who adopted his wife's maiden name when he married – told several media outlets. But Tina said their actions have been well received, except for “some creeps on the internet.”

While the couple cannot fathom anyone being concerned with unborn children – the first sign they ever made had an arrow pointing at pro-life advocates with the words “Weird hobby” – they are heavily involved in protecting stray cats from being put to sleep.

Tina is an organizer of the annual HepCat race to benefit the SAFE Haven Cat Shelter and Clinic, which its website describes as “a nonprofit, no-kill shelter” in Raleigh.

Tina, who has been a vegetarian since she was 12, told Cosmo that one of the first disagreements she and her husband had was over “the ethics and the politics of” eating meat. (The other was “about Grayson using gender pronouns.”) In time she convinced her husband to give up the joy of eating Bojangles chicken.

The born activist has taken to the streets throughout their marriage. She was arrested as part of the “Moral Monday” protests at the state capital, the weekly liberal protests against the policies of Republican Gov. Pat McCrory. In addition to McCrory's policies on abortion, she has said she is “upset about voter ID laws, [and] reduction of education funding and social programs.”

“By the way, we support marriage equality, too,” she blogged.

But it was not until they began opposing the pro-life movement that she gained any notoriety. Now, she said, her movement has ballooned from just two people to dozens.

She told The Huffington Post she “probably” had 60 people supporting her side outside the abortion facility last week. A photograph for the following Saturday showed perhaps half that many people in attendance.

Her ultimate goal, she said, is to have enough pro-abortion protesters to “crowd them out,” so that pro-life sidewalk counselors “don't have a chance to show their signs.”

“We would love to see this more humorous take on combating these hateful things spread,” she told Cosmo.