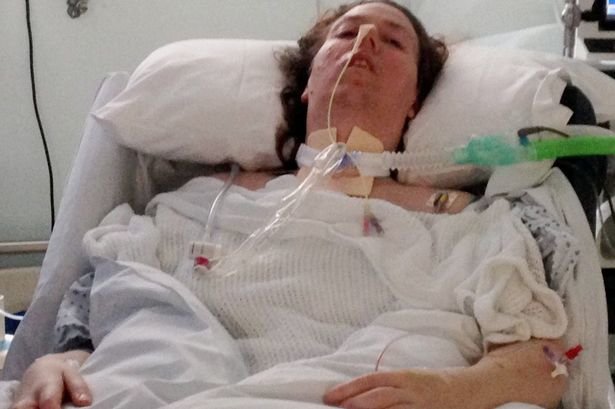 March 25, 2015 (LifeSiteNews.com) – A woman declared brain-dead by doctors awoke from her coma after hearing doctors repeatedly ask her husband if he wanted to remove her life support.

“What are your wife’s wishes about being kept alive on a ventilator,” doctors asked John Bone more than once in the week after the health scare that resulted in her being placed in a medically-induced coma, a report from the Inqusitr said.

Things happened fast after Jenny Bone was hospitalized in March 2014 unable to move or control her bodily functions.

“It was a bolt out of the blue when they first asked me about switching off the life support,” John Bone said. “She had only been taken ill on the Friday and on the Monday morning I was asked to go into a room. I knew that meant whether my wife was dead or she was close, but I said straight away it was far too soon.”

The UK man said that doctors weren’t able to diagnose his wife’s condition, but still approached him about ending her life support.

“They basically said they don’t know what’s wrong with her and she wasn’t responding,” he said. “But it was just too soon to even consider that.”

Jenny Bone has Guillian-Barr Syndrome, a rare condition that affects the immune system, causing it to attack the nerves, and which can result in paralysis. It was the paralysis that made her appear unconscious and rendered her unable to respond when doctors ran tests to determine her condition after she was rushed to the hospital last year.

The 40-year-old woman was pronounced brain dead after she stopped responding to brain scans and reflex tests.

But she heard everything that was said when the doctors asked her husband about removing her from life support.

It’s not the first time a patient has been declared brain dead or in a persistent vegetative state (PVS) while still aware and able to hear what’s going on around them. The PVS diagnosis has been the source of controversy for a number of years, with disability advocates pushing for its reconsideration or elimination.

An Ontario man deemed to be in a persistent vegetative state was able to communicate with doctors after a medical breakthrough in late 2012 allowed them to analyze his brain waves.

Euthanasia prevention advocates estimated at the time that as much as 40 percent of PVS diagnoses are false.

A 12-year-old Texas boy declared to be in a PVS that same year was in danger of his life support being removed on the order of a hospital ethics committee before he began to recover from a gunshot wound.

Even after the ethics committee’s ruling was revoked and the boy began to breathe on his own, his doctor withdrew his food and water and slipped a Do Not Resuscitate order into his chart without consulting his parents or obtaining permission. When he was confronted, he said the child was in a persistent vegetative state.

At times the PVS diagnosis has been misapplied, as was the case for Baby Joseph, the Canada child suffering from a neurological condition that led people to believe he was unresponsive. His parents had to fight the hospital from removing his life support, and he was later transferred to a U.S. hospital for further treatment before dying naturally from his condition at home.

John Bone said it was just a few days after the first time he declined removal of his wife’s life support that doctors pushed about the matter again.

“I was sitting at her bedside holding her hand,” he said. “I think it should never have been done in earshot of her.”

“But to find out that she had heard what was said was just chilling,” he continued. “She remembered it word for word.”

Given her condition and the doctors’ inability to diagnose it, had John Bone not gone against his wife’s previously stated request, her life would not have been saved.

“I was actually very surprised that my husband told them to not switch off the life support machine,” said Jenny Bone. “Like most couples, we’d had the conversation about what we would do if that sort of thing happened to the other person, and I said I would like it to be switched off.”

“So he actually went against my wishes,” she said. “But I am obviously very pleased he did that now.”