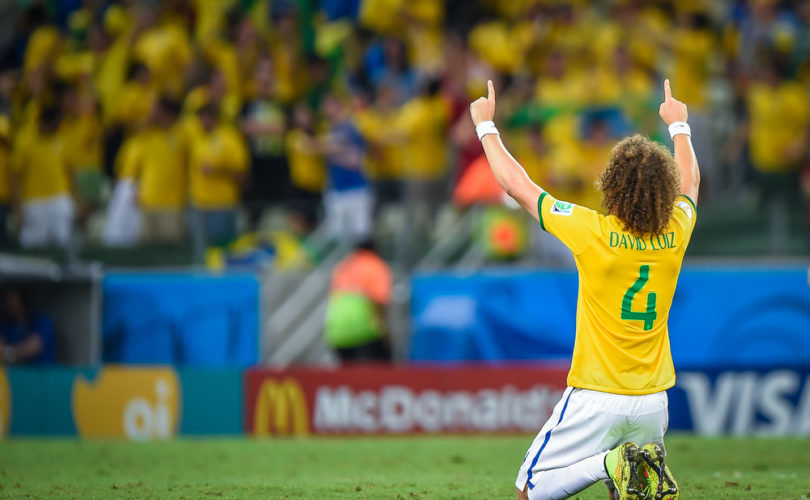 PARIS, May 22, 2015 (LifeSiteNews.com) – Sports stars are known for tales of wild sexual escapades. But Paris Saint-Germain defender David Luiz, an internationally renowned soccer player, has said he will abstain from sex until after he is married.

The 28-year-old ex-Chelsea player was baptized as a Christian in a teammate's swimming pool last Friday. He is engaged to Sara Madeira.

The Brazilian soccer star posted a photo of his baptism on Instagram, and with it noted that he has “chosen to wait.”

Luiz captioned his Instagram quoting a verse in Second Corinthians: “If anyone is in Christ, he is a new creation. The old has passed away; behold, the new has come.”

He continued to say:  “How wonderful to live with you Lord, thank You for loving me so much and take care of me! My life is yours, and I am your servant!” He said God is “always in the center of all my decisions! I love my God! Amen.”

Other soccer stars, like American goalkeeper Tim Howard – who set a World Cup record with 16 saves in one game – is a devoted believer, as well.

Luiz said his faith is shared by teammates Maxwell and Kaka, whom Luiz says is his role model.  Kaka also waited until his wedding day at the age of 23, saying “My wife is the person I love and it was worth waiting.”

“I think people need to control themselves from making love before marriage. Of course, everyone has their own opinions but I think it was worth the wait,” Kaka said.

Luiz echoed Kaka, saying, “My faith gives me the belief that I can go out and perform and improve as a player. It gives me strength and inspiration.”

Since Luiz made his international debut, he has earned over 40 caps. Primarily a central defender, Luiz can also be deployed as a defensive midfielder. While playing for Chelsea, Luiz helped the team win the Champions League and the FA Cup.

In 2014 he transferred to Paris Saint-Germain for 50 million British pounds (approximately $77 million U.S.), a world record transfer for a defender.

Despite the temptations inherent in being a worldwide sports star, Luiz remains devoted to Christ.  Breakpoint.org noted that, following Brazil's 7-1 defeat in the 2014 World Cup Final, Luiz said, “My faith in Jesus gives me strength to keep on going out onto the field and to do my best, but I also want to inspire others—that is what God inspires me to do.”

“For me, true life is found in the relationship with Jesus Christ. I believe that everything in life belongs to God and he has a clear plan for us if we follow him,” Luiz said.