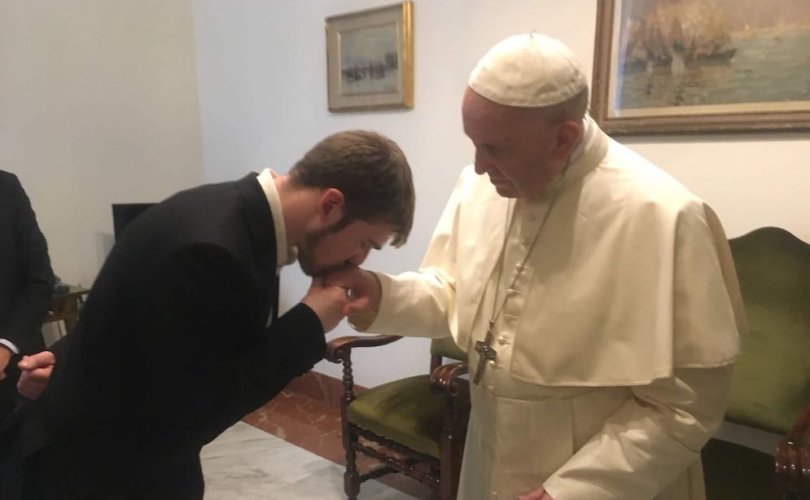 The Pope received Thomas Evans, 21, in private audience at his residence, in the Casa Santa Marta, this morning before the Wednesday general audience. Evans was accompanied by a translator and a journalist from an Italian newspaper.

Both Evans and his son are baptized Roman Catholics.

The 9 a.m. meeting lasted 20 minutes and was organized by Bishop Francesco Cavina of the Italian diocese of Carpi.

After listening to Evans’ plea, the Pope told him: “You speak well, Thomas, you are defending your son with courage, the same courage with which God defends his children…”.

He also tasked Bishop Cavina with maintaining relations between the Vatican’s Secretariat of State and the family “so that all initiatives be taken to transfer the child to the Bambin Gesù in Rome.”

The Evans family has released Tom Evans’ appeal to the Pope. (Full text below.) Evans told Pope Francis that his child was “sick but not dying and does not deserve to die,” and asked the pontiff to give his son asylum.

“We have now realized our son’s life does not mean much to the NHS [National Health Service],” Evans said. “We [beg] you to help our son. Alder Hey do not want to let Alfie leave the hospital unless he is dead! Alfie is not dying, so we don’t want to take him out in the way the hospital wish us to.”

Evans explained that he and Alfie’s mother want to bring him to the Vatican’s children’s hospital, the Bambino Gesù, “where we know he is safe and he will not be euthanized.”

The Bambino Gesù hospital has already agreed to take Alfie and provide him with full care.

The young father contested the British judges impartiality, saying that they listened to everything the hospital said and agreed with them. Evans said that there was “no real medical evidence” that Alfie is dying.

He also criticized the hospital’s treatment of the infant, saying that it is “clinically and professionally very wrong.” Evans then said he believed Alfie was being treated in this fashion because he is disabled and the United Kingdom wishes to legalize euthanasia.

“Please help us save our innocent child and give him the grace of asylum to keep our family safe and to stop all of this,” he told the Holy Father. “The hospital [staff] are depriving us [of] sleep and not allowing us to sleep with our own son; we have to sit in a chair with him all night to comfort and protect him.”

“I entrust to your prayer people such as Vincent Lambert in France, little Alfie Evans in England, and others in different countries who live, sometimes for a long period, in a state of grave illness, medically assisted for their basic needs.”

“These are difficult situations, very painful and complex,” he continued. “Let us pray that every sick person will always be respected in their dignity and cared for in a way adapted to their condition, with the joint efforts of families, doctors and other health care workers, and with great respect for life.”

Thomas Evans and his partner Kate James are locked in a struggle with the Alder Hey Children’s NHS Foundation and the British courts over Alfie’s fate. The children’s hospital says that Alfie has a severe and progressive neurological disorder that has almost destroyed his brain. It petitioned the courts for permission to remove Alfie’s life support against the will of his parents.

On February 20, Mr Justice Hayden ruled that it was in Alfie’s best interests for the hospital to cease treatment, remove Alfie’s ventilator, and begin palliative care.  Since then Evans and James have fought the case through the UK court system and before the Court of European Human Rights, to no avail.

Alfie’s parents wish Alfie to be airlifted from the Liverpool hospital to the Bambino Gesù hospital in Rome, where a team of medical professionals are willing to continue his care. The famous children’s hospital belongs to the Vatican. This week, after a panel of three justices at the UK Court of Appeal in London rejected Evans’ application to have his son released from Alder Hey, Alfie’s parents brought an appeal of that decision before the UK Supreme Court.

Until now, Pope Francis as not made a public statement placing himself on either side during the ongoing dispute.

Tom Evans made an appeal to Pope Francis on Monday through Evan’s local ordinary, the Archbishop of Liverpool. In response to a leaked internal memo of the archdiocese denying that he was a Catholic, Evans expressed “sorrow”:

“My greatest sorrow results from not having been recognized as a child of Holy Mother Church,” he wrote to Archbishop McMahon. “I am Catholic, I was baptised and confirmed and I’m looking to you as my shepherd and to the Holy Father as the vicar of Jesus Christ on earth.

“That’s why I knocked on the Church’s door asking for help in order to save my son from being euthanised,” he continued.

Thousands of people calling themselves “Alfie’s Army” have sided with Alfie’s parents against the hospital. Since Evans attempted to remove his child from the hospital on Thursday, there have been daily rallies and prayer vigils outside the hospital, swelling to as many as a thousand on Thursday night.

Responding to unsubstantiated claims that staff, patients, and parents have experienced “intimidation” from protesters, Evans has asked for the gatherings to cease for now.

Full Text of Tom Evans’ Message Delivered to the Holy Father (first released in English by the National Catholic Register on Wednesday, April 18, 2018)

I cannot thank you enough for allowing me the opportunity to be here in front of Your Holiness today.

Our child is sick but not dying and does not deserve to die. He is not terminally ill nor diagnosed.

We have been trying our best to find out his condition, to treat or manage it.

I am now here, in front of Your Holiness, to plea for asylum. Our hospitals in the U.K. do not want to give disabled children the chance of life and instead assisting in the death of children.

We now have realized our son’s life does not mean much to the NHS [National Health Service].

We plea to you to help our son.

Alder Hey hospital do not want to let Alfie leave the hospital unless he is dead!

Alfie is not dying, so we don’t want to take him out in the way the hospital wish us to.

We see life and potential in our son and we want to bring him here to Italy, to the Bambino Gesù, where we know he is safe and he will not be euthanized.

When Alfie shows me and his mum any sign of suffering or dying, we will enjoy every last moment with him, but Alfie has not yet shown us he is ready to go, so we continue to fight just as he shows us to.

If Your Holiness helps our child, you will be potentially saving the future for our children in the U.K., especially the disabled. We pray the problem we are facing is solved peacefully and respectfully. No child deserves this.

Especially not a child of God.

The judges in the U.K. have not told the truth about our son and his condition. They have listened to everything the hospital have said and agreed with them. But there is no real medical evidence to say Alfie will die, or that he has this form of disease.

Alfie has been on life support, with a tube down his nose and throat, for 15 months. This is very wrong. He should be, and needs to be, on a tracheostomy. This is clinically and professionally very wrong.

We do not understand why our child amongst many more are being treated like this. We believe it is because he is disabled and the U.K. want to legalize euthanasia.

Please help us save our innocent child and give us the grace of asylum to keep our family safe and to stop all of this.

The hospital are depriving us from sleep and not allowing us to sleep with our own son we have to sit in a chair all night with him to comfort and protect him.