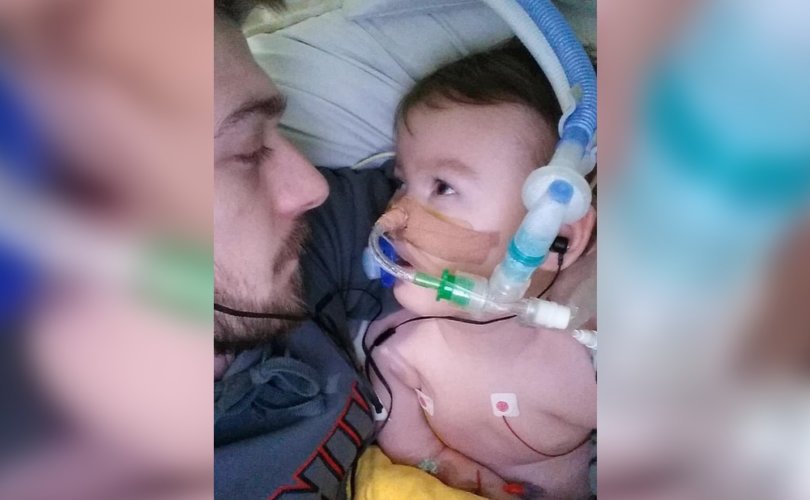 ROME, April 16, 2018 (LifeSiteNews) — Alfie Evans’ father has said he is knocking “on the Church’s door” asking for help to save his son from being euthanized, and is pleading that his “voice be brought to the Holy Father” so that Alfie can be transferred to “the Pope’s hospital” in Rome.

In a letter sent on Sunday to the archbishop of Liverpool, Thomas Evans also confirmed that he and Alfie are both baptized Catholics despite the archdiocese saying that they weren’t.

So far the archdiocese has made no comment on the case.

According to an internal memo from the archdiocese leaked today (published in full below), an archdiocesan auxiliary bishop has offered support “to doctors and staff” of Alder Hey children’s hospital, but “has not met with the parents who, it is understood, are not Roman Catholic.”

The level of ignorance reflected in the leaked memo is particularly astounding given the fact that the judge who ordered Alfie’s ventilator to be removed stated in his ruling that the child’s parents are Catholic, and even used Pope Francis’ words to justify his decision (Kate James, in fact, was baptized in a Protestant Church).

The internal memo, dated April 13, also describes the Alder Hey medical staff as acting “in the best interests of Alfie,” and it praises the hospital as a “centre of excellence.” It includes statements from the hospital and local police regarding recent peaceful protests outside the hospital, but fails to include any statement from Thomas Evans and Kate James.

A source close to the Vatican and to the Catholic Church in England told LifeSiteNews: “The statement from Peter Heneghan of the archdiocese of Liverpool is astounding for its blithe denial of Tom Evans’ professed Catholicism, for its lack of compassion and for the absence of anything pertaining to the Catholic faith. It might as well have been written by an ill-informed official from the local Council or NHS Trust.”

“Coupled with the conspicuous and unacceptable silence of Archbishop McMahon, we’re left to believe there’s something seriously rotten about the archdiocese of Liverpool,” said the source, speaking on condition of anonymity.

The silence is particularly problematic because, in March, Archbishop Vincenzo Paglia, President of the Pontifical Academy for Life, said the Vatican would not intervene in preventing the removal of Alfie’s ventilator,  insisting that the English bishops’ conference “can intervene on sensitive issues like these.”

“There is a local community that accompanies these people. They are able to know the situation more closely and more accurately. I would never want such an intense drama to be reduced to a battle on abstract principles,” Paglia told the Italian news agency Tempi.

However, so far the local archbishop and the bishops’ conference haven’t issued any comment, while the leaked archdiocesan press memo makes clear that no one from the archdiocese has met with Thomas Evans and Kate James, nor with little Alfie.

This morning, in fact, an Italian priest living in London made a four hour journey to Liverpool to administer the sacrament of the annointing of the sick to little Alfie, because he read that a priest of the archdiocese was contacted but replied, “it is not my job.”

“If the Church wants to be a Mother she has to draw close to the weak, to the sick, and to the least ones,” said Fr. Gabriele. The Italian priest noted how Alfie “responds” and “reacts” when his father draws near to him and kisses him. He also expressed deep concern that “the fifth commandement is being violated so supeficially,” but said “it is beautiful to see a father with such clear principles, who is capable of knowing good from evil.”

A plea for help

In his letter on Sunday to Archbishop McMahon of Liverpool, Thomas Evans said that as a “child of Holy Mother Church” he is looking to the archbishop as his “shepherd” and to the Holy Father “as the vicar of Jesus Christ on earth.”

“That’s why I knocked on the Church’s door asking for help in order to save my son from being euthanized,” Alfie’s father stressed.

Today a British judge dismissed an appeal made by the couple, that would have allowed them to remove their son from Alder Hey Children’s Hospital and transfer him to the Bambino Gesú Hospital in Rome, which has offered to take Alfie.

At the hearing this afternoon in Westminster, Lord Justice Moylan stressed that Tom and Kate’s parental rights over Alfie “do not take precedence” over what the court has determined is in the child’s best interests. It is “wrong to say that the parents’ own views can trump that judicial determination,” the judge said.

Here below we publish Thomas Evans’ letter to Archbishop Malcolm McMahon of Liverpool.

My name is Thomas Evans and I am Alfie’s father.

I felt great sadness reading the press release issued by the Archdiocese, concerning my son’s situation.

My greatest sorrow results from not having been recognized as a child of Holy Mother Church: I am Catholic, I was baptised and confirmed and I’m looking to you as my shepherd and to the Holy Father as the vicar of Jesus Christ on earth.

That’s why I knocked on the Church’s door asking for help in order to save my son from being euthanised!

Alfie is baptised like me and like you, Your Excellency. I would like that prayers for him and for us be addressed to the only real God.

I am aware that my son’s death is a real possibility and maybe is not a long way off. I know that heaven is waiting for him as I cannot imagine which kind of sin that innocent soul, nailed to his bed as to a cross, may have committed.

But I’m also aware that his life is precious before God’s eyes and that Alfie himself has a mission to accomplish. Perhaps his mission is to show the entire world the cruelty behind the judge’s words. For this judge stated that Alfie’s life is “futile”,  thus supporting the same opinion of the hospital which wants him to die by suffocation.

I am not a doctor, but I can see that my son is alive and I see that he’s not being treated. I’ve been asking the hospital for months and I’m still asking them to let us transfer our child, mine and Kate’s child, God’s child, to the Pope’s hospital which promised to take care of him, as long as Our Lord will allow it and until Alfie will have completed his journey.

Why do they not let us remove our child from that hospital? Have you asked yourself this question, Your Excellency?

We don’t want to force ourselves upon him and we don’t want therapeutic obstinacy but we would at least like his disease to be diagnosed and we would like him to receive the best possible treatment.

And we do not believe Alder Hey is able to grant this: they showed us and the entire world they are not able to and they just don’t want to do it.

They declare they want to replace medical treatment with palliative care.

But actually they have been handing out palliative care for months and now it’s that same palliative care they want to withdraw, together with the mechanical ventilation, in order to sedate him and let him die by suffocation.

It seems to me that this is neither right nor Christian.

In my opinion this is euthanasia and we do not want our child to be left to die in such a way. Moreover, this might set a further precedent like in Charlie Gard’s case in order to prevent parents from taking care of their sick children, considered a burden by the State because they are ill and “therefore” useless, unproductive and expensive.

So please, Your Excellency, do accept my request for help and bring my voice to the Holy Father, so that everything possible is done to help me and Alfie’s mum Kate to take our child out of Great Britain to be cured until the natural end of his earthly existence.

I invoke Your blessing and I pay mine and Kate’s respects.

Read the leaked memo from the Archdiocese of Liverpool: