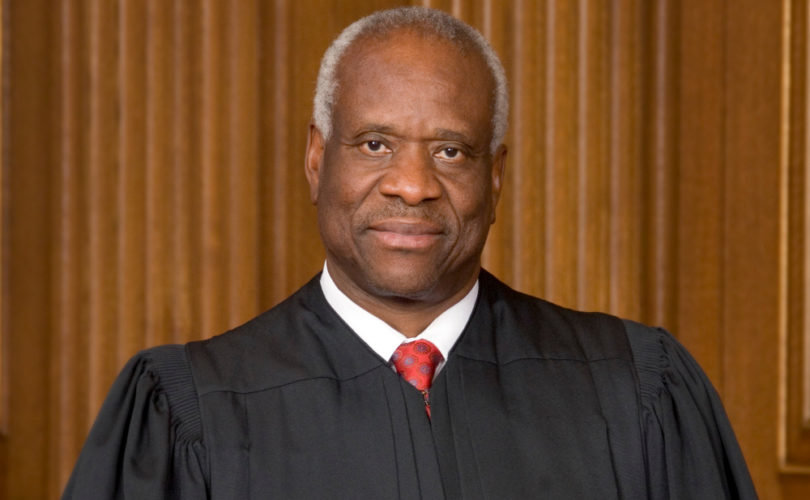 DALLAS (LifeSiteNews) – The leak of a draft opinion in a hugely consequential abortion case is a grim omen for the institutional integrity of the U.S. Supreme Court, conservative Justice Clarence Thomas warned Friday.

On May 2, Politico published a leaked draft of a majority opinion by conservative Justice Samuel Alito for Dobbs, which concerns Mississippi’s 15-week abortion ban. The draft declares that “Roe was egregiously wrong from the start,” and therefore it is “time to heed the Constitution and return the issue of abortion to the people’s elected representatives.” In response, the Court announced the draft was authentic but “does not represent a final decision by the court or the final position of any member on the issues in the case,” and announced the leak was under investigation.

— Article continues below Petition —
PETITION: Call on Biden to condemn violent pro-abortion rioters across America!
Show Petition Text
20968 have signed the petition.
Let's get to 22500!
Thank you for signing this petition!
Add your signature:
Show Petition Text

Mediaite reported that Thomas was speaking at the Old Parkland Conference hosted by the right-leaning groups American Enterprise Institute, Hoover Institution, and Manhattan Institute when he expressed concern that “we are in danger of destroying the institutions that are required for a free society.”

“You can’t have a civil society, a free society, without a stable legal system,” Thomas said. “You can’t have one without stability and things like property or interpretation and impartial judiciary. I’ve been in this business long enough to know just how fragile it is.”

“The institution that I’m a part of — If someone said that one line of one opinion would be leaked by anyone, and you would say that, oh, that’s impossible,” the justice went on. “No one would ever do that. There’s such a belief in the rule of law, belief in the court, a belief in what we were doing that that was verboten. It was beyond anyone’s understanding, or at least anyone’s imagination that someone would do that. And look where we are, where now that trust or that belief is gone forever.”

“And when you lose that trust, especially in the institution that I’m in, it changes the institution fundamentally,” he warned. “You begin to look over your shoulder. It’s like kind of an infidelity, that you can explain it but you can’t undo it.”

Thomas also called out the disparate treatment of conservative and liberal justices and judicial nominees, from the baseless rape claims against Brett Kavanaugh to this month’s Democrat-condoned protests outside the homes of Republican-appointed jurists.

“You would never visit Supreme Court justices’ houses when things didn’t go our way,” Thomas told the predominantly conservative audience. “We didn’t throw temper tantrums. It is incumbent on us to always act appropriately, and not to repay tit for tat [… from conservatives,] you will not see the utter destruction of a single nominee. You will also not see people going to other people’s houses, attacking them at dinner at a restaurant, throwing things on them.”

Pro-lifers in Congress could pursue a nationwide abortion ban as well, and many pro-lifers will no doubt urge them to do so, in order to prevent states like California from attempting to keep interstate abortions thriving.