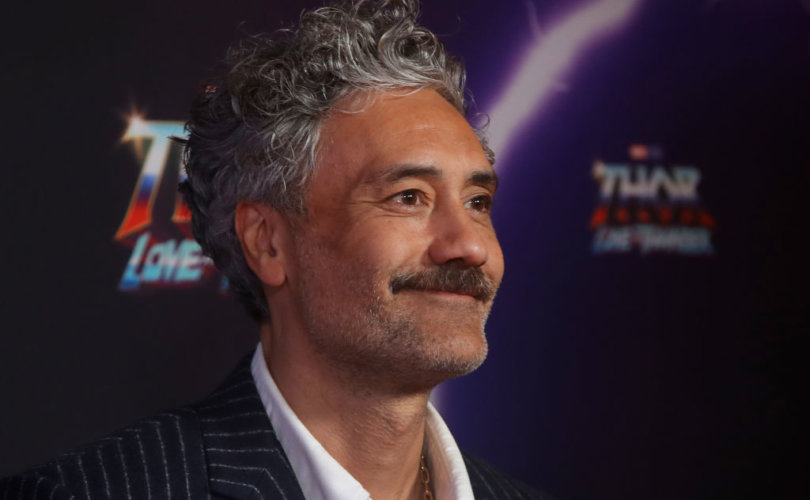 (LifeSiteNews) – With the recently-released Thor: Love and Thunder proving to be the Disney-owned Marvel Studios’ “gayest” movie yet, its eccentric director Taika Waititi is doubling down on the film’s LGBT content in the wake of its lackluster performance.

In 2019, Marvel Studios president Kevin Feige announced that the fourth Thor installment would feature a subplot in which supporting character Valkyrie (Tessa Thompson), now serving as “King” of the titular hero’s surviving Asgardian people on Earth, would set out to “find her queen.”

READ: New York Times says cannibalism ‘has a time and a place’ in new low for our cultural elites

Three years later, that subplot did not make it to the final product, but Love and Thunder still satisfied LGBT activists’ demands of “representation” with dialogue references to Valkyrie’s bisexuality, and more significantly via alien sidekick Korg (voiced by Waititi himself), who is revealed to have two dads (contradicting the previous film, Waititi’s Thor: Ragnarok), indicated to belong to a species comprised entirely of males who naturally reproduce together, and by the end of the film has a male partner of his own.

Speaking to LGBT magazine Out for the film’s July 8 release, Waititi declared that he enjoys LGBT stories because “we’re all queer. Just to varying degrees of where we are on the spectrum I think. I think, innately, humans have all got some degree of queerness in them.”

“With Thor, it’s great to be able to finally get Tessa’s character, and my character as well, where we’re both queer,” he added.

Waititi also gushed about the accolades he receives from the LGBT community: “I love it. I mean, I’m just amazed to hear what my friends think of me. I’ll be like, ‘Hey guys, you’re looking at a little gay icon over here,’ and it feels really amazing.”

General audiences are less receptive. Love and Thunder currently holds just a 67% critics score and 78% general audience score on review aggregator Rotten Tomatoes, with many panning the film as tonally incoherent, with Waititi’s trademark sense of humor undermining the dramatic weight of the conflict and the credibility of Thor himself (Chris Hemsworth) as a hero.

More significantly, despite being on track to bring in $500 million, once word-of-mouth circulated, the film suffered a second-weekend dropoff of 68%, the biggest decline from an opening weekend for the Marvel Cinematic Universe franchise so far.

— Article continues below Petition —
Parents' Pledge: We will pull our children out of explicit sex-ed classes
Show Petition Text
3999 have signed the petition.
Let's get to 4000!
Thank you for signing this petition!
Add your signature:
Show Petition Text

“This kind of fall cannot be blamed on a change in audience behavior in a post-pandemic world — Top Gun: Maverick delivered phenomenal holds — but can probably be attributed to Love and Thunder’s mediocre reviews, mixed fan reception, and the knowledge that the film will be available on the Disney+ streaming app 45 days after its theatrical debut,” Collider reports.

Starting in 2008 with Iron Man (prior to Disney’s acquisition of Marvel Entertainment), the Marvel Cinematic Universe was a massively successful series of superhero films, which much of its popularity attributed not only to the respectful adapting of comic-book source material and patiently-planned long-term storytelling, but also to its status as a consistent source of unifying escapism largely devoid of politics.

For years, however, LGBT activists have pestered Marvel and other entertainment companies for “representation” in their stories. Marvel first appeased these demands with a fleeting reference to same-sex dating in the grand finale to the MCU’s first saga, 2019’s Avengers: Endgame. Since then, LGBT elements have appeared in multiple follow-ups, including The Eternals, Loki, Hawkeye, Doctor Strange in the Multiverse of Madness, and now the latest Thor film.

The latest wave of Marvel projects has also forayed into racial identity politics, introducing various “diverse” successors to white and male heroes and using the streaming series The Falcon and the Winter Soldier to usher in Sam Wilson (Anthony Mackie) as a new Captain America who resents American iconography and views the United States as teeming with racists.