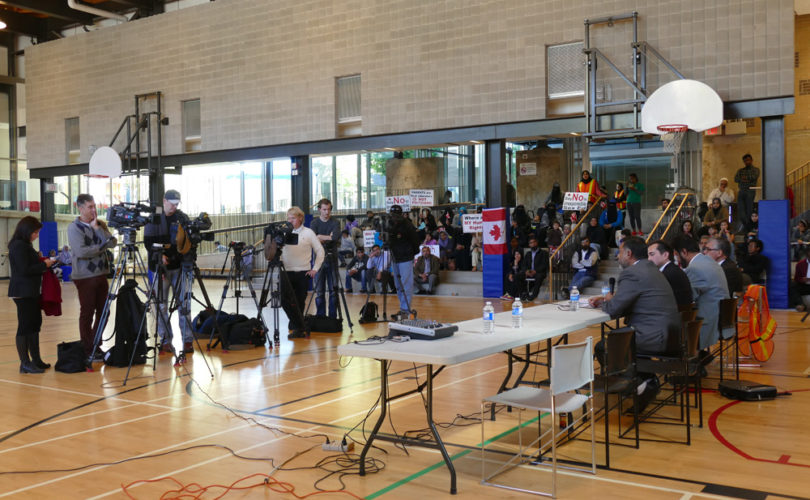 TORONTO, ON, October 2, 2015 (LifeSiteNews) – As parents in 25 of the 52 school boards across Ontario pulled their kids from school Thursday to protest the Liberal government’s controversial sex-ed agenda, Thorncliffe Parents Association announced it will extend its groundbreaking 30-day student strike yet another 30 days.

“We are not going to send our children back to school,” stated TPA president Khalid Mahmood at an October 1 press conference, “We are going to continue keeping them out.”

While no estimates were available by deadline on the number of children pulled from class across the province for the Thursday strike, CFA confirmed that schools in 12 Catholic boards and 13 public boards across Ontario were affected.

And at the Grade 1 to 5 Thorncliffe Public School – where it all began – there were 737 students absent and 532 students in class, according to figures given CTV by principal Jeffrey Crane.

Crane expressed frustration with the ongoing sex-ed protests earlier in the day, telling CBC Metro Morning host Matt Galloway that the vocal and highly visible parental opposition to the sex-ed curriculum engulfing his school is “unlike anything I’ve ever experienced.”

“I’ve spent the past several weeks trying to convince parents to come to school,” Crane told Galloway, “I never thought we would be doing that in the city of Toronto.”

But according to CFA spokesperson Jack Fonseca, the reason for this unprecedented parental protest is the “Kathleen Wynne’s Liberal regime” which he told the press conference “is actually pushing children out of the public education system.

“And that’s a disgrace, that’s a scandal for which she should resign,” said Fonseca, a project manager for Campaign Life Coalition and outspoken critic of the curriculum, who lauded Thorncliffe parents for “helping to lead the charge for parents against the sex ed.”

Indeed, Thorncliffe Park, a predominately Muslim community in the heart of Kathleen Wynne’s Don Valley West riding, now appears the most volatile flashpoint in the seven-month’s long battle over the curriculum between thousands of upset parents and the Liberal government – a battle that CFA claimed Thursday won’t end until the Liberals repeal the curriculum, or are held to account in the 2018 election.

Fonseca also outlined parents’ concerns, among which is that teaching the names of genitalia to children in Grade 1 gives teachers an opportunity to use explicit illustrations and teaching aids if they choose.

And while Wynne and Minister of Education Liz Sandals said that parents should trust the experts, there is “a growing problem” of “teachers having sex with their students,” Fonseca said.

He cited a US Department of Education report that documented 290,000 incidents of teachers sexually preying on students in nine years. The study noted in comparison that there were 10,000 documented cases of priests sexually abusing children in a 50-year period.

“I see no reason to doubt that we are experiencing the same rate of sex abuse by educators in Canada,” Fonseca added. “So when the Liberals tell us that teachers are the experts, think again. Don’t believe the spin.”

In fact, Fonseca pointed out that Liberals’ “fake parental consultation” asked respondents “one question that was actually good”: whom did they trust most as sex educators for their children.

“Teachers were dead last,” he said, while parents were ranked first, and doctors next. “So there is a trust problem as well.”

Christina Liu, another CFA spokesperson, noted that the sex-ed curriculum “is promoting ‘sexual freedom.’ It is not promoting sexual health, as is being claimed by our provincial government.”

A member of Parents Alliance of Ontario, Liu is concerned that the curriculum endangers children by not pointing out the risks of sexual behavior. “As a mom, I want my children to stay healthy to enjoy sex, not to enjoy sex that destroys their health.”

“Children are Ontario’s future,” she said. “And we can only raise them once, so we have to raise them right.”

Afir Jahangiri of the Mississauga Parents Association said that he knows of 10 new private schools in the Peel district, a waiting list at three of the most popular of these, and 20 new homeschooling initiatives in Mississauga.

“Mothers make a small club, and they have started these,” he told LifeSiteNews, adding that he did not know how many students have been pulled permanently from the public system in the Peel district because people are “under the radar.”

“They don’t want to fight on the roads,” he said. “Sometimes they are taking their kids from their school and just start working, their own way. Not everybody fights like this.”

But however parents choose to fight, it’s undeniable that “people are angry,” Jahangiri told LifeSiteNews. “You will see the results in the upcoming election.”

TPA’s Mahmood told LifeSiteNews there is a core group of 200 students enrolled at Thorncliffe Public School and adjacent kindergarten school who will remain out of class as part of his group’s next 30-day strike.

A further 300 he knows of are now permanently enrolled in private schools, he said.

October 30 is CFA’s next province-wide student strike, or “Black Day.”

Meanwhile, the Thorncliffe Park parents will continue their singular way for at least 30 more days – fighting “on the roads.”