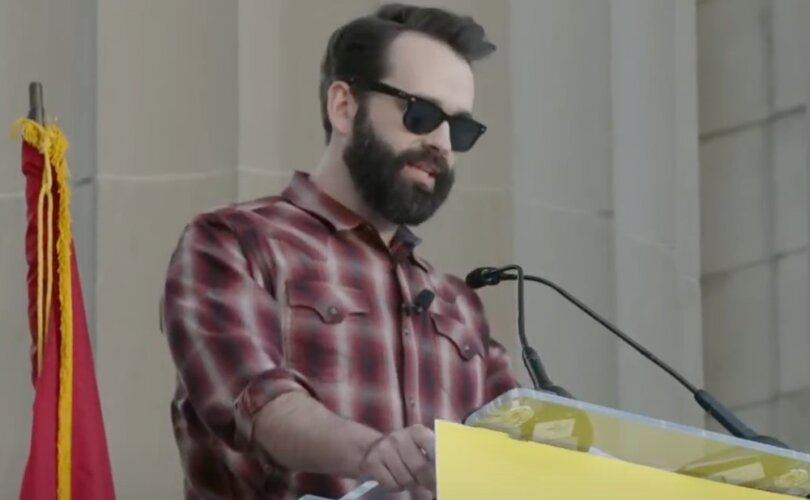 NASHVILLE, Tennessee (LifeSiteNews) — Thousands of people attended Matt Walsh’s “Rally to End Child Mutilation” on Friday to show opposition for the continued chemical and genital mutilation of kids through transgender drugs and surgeries.

Speakers at the event organized by The Daily Wire host included former Democratic Congresswoman Tulsi Gabbard, Senator Marsha Blackburn, formerly gender-confused woman Chloe Cole, and “Scott” Newgent, a woman who “transitioned” to a man and has since spoken out against the harms of trangenderism. Speakers spoke over screaming from LGBT activists upset at the criticism of the chemical and genital mutilation of children.

“There is, in this state and all across the country, a conspiracy to target and indoctrinate our children into the cult of gender ideology,” Walsh said to kick off the event. This cult “fosters delusion, intentionally creates an identity crisis in young, impressionable kids.”

“It’s a cult which convinces them that gender doesn’t exist, that they have no identity; it’s a path to confusion and despair,” Walsh said. He then mentioned that Vanderbilt University Medical Center had started committing transgender surgeries and injecting kids with drugs for profit. Walsh’s report led to a temporary ban on the procedures by the medical center and calls by Republican leaders to ban the surgeries.

She said that “without recognition that there is such a thing as truth, there are no boundaries in our society.”

“The most vulnerable among us, our children” are “suffering” because of this denial of truth. “Our kids are having their childhoods stolen from them,” she said.

Gabbard shared that as a kid she was a “tomboy,” and she wanted to be “cool” and “fun” and be a boy. “I moved on, and I grew up though,” she said. She criticized people who want to take away the rights of parents to raise their kids free of gender ideology. Last week, a leftist Virginia politician, Delegate Elizabeth Guzman, proposed sending in police officers and social workers to investigate parents who don’t “affirm” their child’s LGBT orientation, and possibly prosecute them for felony child abuse.

— Article continues below Petition —
Stand with Christian daycare worker fired for refusing to indoctrinate kids with LGBT agenda
Show Petition Text
7384 have signed the petition.
Let's get to 7500!
Thank you for signing this petition!
Add your signature:
Show Petition Text

“Truth” was a major theme of the event.

“I’m a woman and I will never be a man,”speaker Scott Newgent said at the rally Friday. Newgent appeared in Walsh’s What is a Woman? documentary. She said the chemical and genital mutilation of children is about one thing: “money.”

“No one can change their sex. Medical transition is experimental, cosmetic, and it only creates an illusion of the opposite-sex for comfort,” Newgent said.

Sen. Blackburn slammed Vanderbilt medical professionals for their “shocking” and “appalling” statements about putting “profits” before the health of children.

She said that children must be protected against “the liberal left” using them for “profit and for political gain.”

“We in Tennessee will not stand for that,” Blackburn promised.

.@MattWalshBlog “It is very clear who stands on the side of truth.” pic.twitter.com/L0eDsr48DA

Walsh ended the rally by encouraging the attendees to continue to push politicians to pursue the truth and to stop the chemical and genital mutilation of children.

“It is very clear who stands on the side of truth, and that is us,” Walsh said to conclude the event.

LifeSiteNews has a series on the harms of transgenderism as described by medical experts and social scientists. Read more here.
$
Donate Now