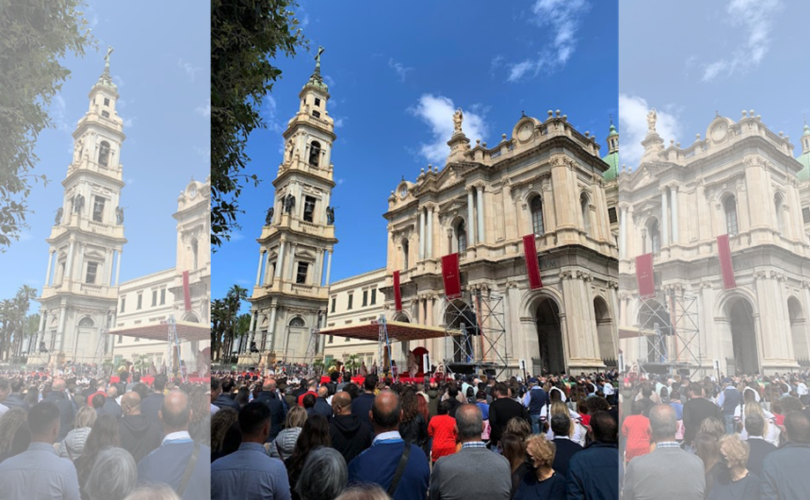 POMPEII, Italy (LifeSiteNews) – On Mother’s Day in Italy, thousands of pilgrims honored the Mother of God by flocking to the famous Rosary Shrine of Our Lady of Pompeii for her feast day at the beautiful basilica built by Blessed Bartolo Longo, a satanist priest turned saint. Crowds were so large that the solemn Mass of the feast was offered in the piazza of the shrine to accommodate the numbers.

The papal basilica, dedicated to Our Lady of the Rosary, enshrines the miraculous image of the Madonna and Child handing the Rosary to Sts. Dominic and Catherine. The church was dedicated in 1891, constructed under the direction of Bl. Bartolo Longo, founder of the Confraternity of the Rosary.

In his young adult life, after the death of his mother, Bartolo Longo fell away from the Catholic faith of his childhood, becoming involved in the occult and advancing to become a satanic high priest. After experiencing deep depression that led him to consider committing suicide, Bartolo Longo returned to the Church when he heard the voice of his deceased father beckoning to him, “Return to God! Return to God!” With the help of a Dominican friar, Fr. Alberto Radente, he renounced his involvement in satanism fully and decided to begin promoting the Rosary. Years later he recounted a key moment of his conversion:

As I pondered over my condition, I experienced a deep sense of despair and almost committed suicide. Then I heard an echo in my ear of the voice of Friar Alberto repeating the words of the Blessed Virgin Mary: “If you seek salvation, promulgate the Rosary. This is Mary’s own promise.” These words illumined my soul. I went on my knees. “If it is true … I will not leave this valley until I have propagated your Rosary.”

After seeking direction from Pope Leo XIII, Bartolo Longo decided to build a shrine in honor of Our Lady of the Rosary. The site chosen was the ancient city of Pompeii, near Naples, where the convert-saint had come back to the faith.

After the construction of the church, Bartolo Longo reflected on the juxtaposition of the Christian city next to the ruins of the old pagan city of Pompeii that had been buried for centuries by the ash of Mount Vesuvius. He wrote,

Next to a land of dead appeared, quite suddenly, a land of resurrection and life: next to a shattered amphitheater soiled with blood, there is a living Temple of faith and love, a sacred Temple to the Virgin Mary; from a town buried in the filth of gentilism, arises a town full of life, drawing its origins from a new civilization brought by Christianity: The New Pompeii!… It is the new civilization that openly appears beside the old; the new art next to the old; Christianity full of life in juxtaposition to long surpassed paganism.

Annually on the feast of Our Lady of Pompeii, Italians still flock to the shrine, imploring the intercession of Mary with the following prayer:

From the Throne of clemency where you are seated as Queen, turn, O Mary, your merciful gaze on us, on our families, on Italy, on Europe, on the whole world. Have compassion on the sorrow and cares which embitter our lives. See, O Mother, how many dangers of body and soul, how many calamities and afflictions press upon us.

Kindly design to hear us, O Mary! Jesus has placed in your hands all the treasures of His Graces and His mercies. You are seated a crowned Queen at the right hand of your Son, resplendent with immortal glory above all the Choirs of Angels. You extend your dominion throughout the heavens, and the earth and all creatures are subject to you. You are omnipotent by grace and therefore you can help us.

Were you not willing to help us since we are ungrateful children and undeserving of your protection, we would not know to whom to turn. Your Mother’s heart would not permit to see us, your children, lost. The Infant whom we see on your knees and the mystical Rosary which we gaze at your hand, inspire confidence in us that we shall be heard. And we confide fully in you, we abandon ourselves as helpless children into the arms of the most tenders of mothers, and on this very day, we expect from you the graces we so long for.