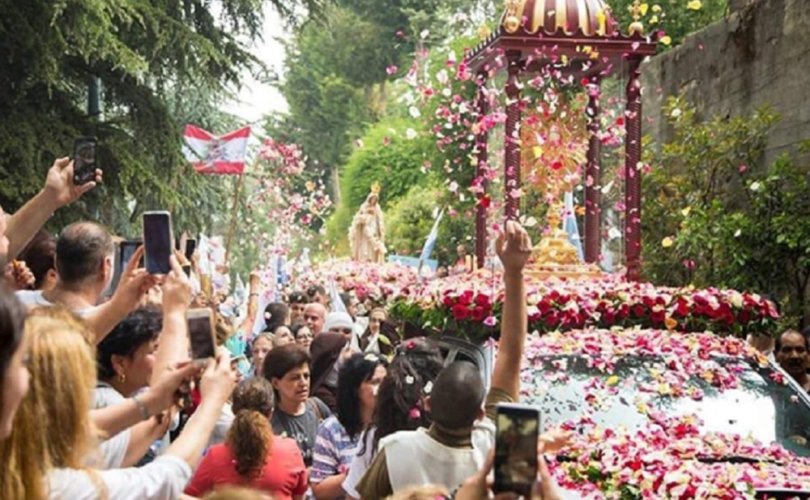 HARISSA, Lebanon, June 11, 2019 (LifeSiteNews) — As Christians around the world celebrated Pentecost Sunday, the Christian minority of Lebanon — once ravaged by civil war (from 1975–1990) and persecution — united in public prayers of solemn reparation, consecration and national Eucharistic procession.

LifeSite connected with Dominic Chickhani, one of the lead organizers of this historic event, for an exclusive look into the “Triumph of Lebanon under the mantle of Our Lady.” Chickhani, who is the lead anchor on Nourasat Telelumiere (the main Middle Eastern Catholic land and satellite TV program), is also the lead for media and communications for the “Consecration of Lebanon to the Immaculate Heart of Mary Patriarchal Committee.” Chickhani is an author of various Catholic Apologetics media, a speaker on Mariology, and a media influencer.

LSN: What took place today, and why on this date?

D.C.: June 9, 2019 marked the seventh Consecration of Lebanon (sixth consecutive renewal) to Mary’s Immaculate Heart. We have consecrated our country to her and under her protection since 2013. The consecration included a Solemn Mass, taking place in the Sanctuary of Our Lady of Lebanon, as has been the tradition each year. This year, however, we included a key feature — one that we pray will be repeated throughout the world October 13, 2019 by member nations of the Holy League (HolyLeagueofNations.com) — a national Eucharistic procession which embedded solemn acts of repentance and reparation throughout the way.

The title and theme of this historic national event was “Country March for Repentance and Salvation.”

LSN: How long did it take for you and your team to prepare for this event?

D.C.: As a small “blitz” team, we have been actively preparing for three consecutive months.

The team was formed from leaders belonging to diverse traditional Marian groups.

As for the final groundwork, through these groups, we organized a national novena with three days of perpetual adoration throughout the country, bringing with us the relics of the four Evangelists, the day of the event.

LSN: We’ve seen photos emerging with what looked to be thousands of participants. Do you know how many people attended?

D.C.: Between 7,000 and 10,000 people participated (1/100 of the total Christian population in Lebanon). The majority were Catholics, but we were very happy that some Orthodox patriarchs from different Eastern Rites were in attendance as well. Even though only two Maronite bishops (out of thirty) showed up, we consider the success of this event to be a historical act of God — a miracle. This is the fruit of Marian consecration and resolve!

LSN: Tell our readers what you experienced today, what events took place, and any graces you received.

D.C.: The event was similar to a celestial wedding — indeed, Heaven on Earth! Marching in unity for the Divine King and the Celestial Queen. We surely felt as if the Spirit of God was scintillating on all and in every heart! Not just this, but we sensed, in a particular way, the protection of Our Lady’s mantle during the procession itself (“the power of the Most High,” Luke 1:35), covering us even from the heat. Indeed, temperatures were at 22 degrees Celsius (71° F) while it should have normally been at 35 degrees (95° F) — just as it had been the day before and as is normal for this time of year.

It’s key noting here that we’ve been experiencing significant signal graces for years — as a direct result of national Marian consecration — but as we started to plan this major endeavor, we have witnessed in significant ways that the triumph of the Immaculate Heart is indeed unfolding! She is exposing the enemy and crushing his traps. Whatever plans our team endeavored to accomplish on behalf of Our Lady — we have witnessed them take shape quickly and surely while the Enemy’s snares (from both within and without) were dissipated. All of this was done so easily, rapidly, as if the time we have left is short.

The faithful had the impression that all the might of God was being poured out upon our tiny flock, “the rest of Mary’s offspring” (Rev. 12:17), “all whose knees have not bowed down to Baal and whose mouths have not kissed him” (1 Kings 19:18). We had the sure conviction — the encouragement that it is possible to triumph within this seemingly fallen Earth, that we were seeing this triumph taking place. We saw, in this event, that it is possible to overcome “the Enemy’s authorities, the powers of this dark world and the spiritual forces of evil in the heavenly realms” (Eph. 6:12). We know now, in a particular way, that because we are consecrated and live by it, victory is our only option. When we are “all in,” when we are “all for the Immaculate” no matter what, we cannot be defeated! As St. Paul writes, “The weapons we fight with are not the weapons of the world. On the contrary, they have divine power to demolish strongholds. We demolish arguments and every pretension that sets itself up against the knowledge of God, and we take captive every thought to make it obedient to Christ. And we will be ready to punish every act of disobedience, once your obedience is complete” (2 Cor. 10:4–6). Mary is the awe-inspiring Lady of the Sun standing strong ahead of us, leading us and protecting us before the terrible Dragon. She is “like an army with banners” (Song of Songs 6:10)!

I believe that the graces earned this day will be translated into protection and blessings — both spiritual and temporal — in the days, months, and years to come, both in Lebanon and, I am sure, worldwide! At the same time, we were all humbled and in deep awe before the Real Presence of Jesus in the Most Holy Eucharist — Who was encompassed by heavy clouds of incense and the holy chants of His people, while the blessed statue of Our Lady of Fatima, surrounded by flowers, was being held on shoulders uphill (some 6 km).

LSN: What does Marian consecration mean for the people of Lebanon?

To be consecrated is to offer Our Lady our lives for the salvation of others (Ex. 24) and the defeat of Evil (Gen. 3:15): Mary’s triumph is united to the kingship of Jesus (Rev. 19:16)! God, in His infinite justice and as our last recourse, has put in front of Lucifer (who is corruption) Mary (who is immaculate). As such, consecration to Mary gives us:

–  the grace of knowing the full truth of God,

–  the power to live the intensity of the Christian life

–  the authority to overcome evil

Consecration to Our Lady, in both by words and action, is paramount!

LSN: What types of acts of reparation were done, and what does reparation mean for the people of Lebanon?

D.C.: We prepared a full-fledged program for the procession and Mass. The procession included many stops where all kneeled, head down in repentance, and the bishops prayed prayers of reparation for both the sins of the nation (systemic sin) and personal sins (private sin). These prayers of reparation were inspired by the ones prayed by Bishop John Keenan (bishop of Paisley, Scotland and head of the “Rosary on the Coasts” initiative of the U.K. — member of the Holy League of Nations) in Westminster Cathedral last year. We also wanted to insert some exorcism prayers as well, like the ones prayed by 300,000 Polish faithful at their national shrine (Jasna Góra) in 2016, the year prior to two million faithful gathering for their Rosary to the Borders event.

D.C.: The Eucharistic procession (that normally starts at one holy place and ends at another) is a public witness of the veneration toward the Most Holy Eucharist. This “earthly journey” reminds the Catholic faithful of their spiritual journey toward eternal life with God.

As Pope Emeritus Benedict XVI eloquently noted in a homily in 2007, “It was born for the very precise purpose of openly reaffirming the faith of the people of God in Jesus Christ, alive and truly present in the most holy sacrament of the Eucharist. It is a feast that was established in order to publicly adore, praise and thank the Lord, who continues ‘to love us to the end,’ even to offering us his body and his blood.”

By processing with the Holy Eucharist in a reverent, prayerful, and joyful manner, we as Lebanese people honored Christ in the Eucharist and served as witnesses to the intimate presence of God in the world and in each individual.

Adoring our all-powerful, all-knowing, all-present, and all-loving God in a Eucharistic procession is to touch grace — a power infinitely greater than nuclear power, the sun, or the Big Bang. As Dr. Peter Kreeft notes, “adoration is more powerful for construction than nuclear bombs are for destruction.” We so need that today!

LSN: You have used “D-Day,” sounding quite like you and the participants see yourselves in active warfare. Tell our readers about that.

D.C.: The conflict is real. The deadliest war ever — for the stakes are eternal!

Jacintha Marto, the 8-year-old visionary from Fatima, Portugal, tells us that it was revealed to the Fatima seers that most people who died went to Hell. Almost all of them! That was then, at the turn of the 20th century. Now it must certainly be worse! Sadly, all the suffering of all the lives who ever lived is not equivalent to the torment of one single soul falling in Hell. So, yes, this is war! We are behind enemy lines in this combat. This was, truly, a “spiritual D-Day” for Lebanon!

St. John Bosco predicted that the Church will be saved through the Eucharist and devotion to Mary. That’s why we need to get back the spirit of holiness and true spiritual militancy in the Church! We have become lukewarm. The state of things in the Church and in the world is deplorable, to say the least. Someone must sound the “clarion call” — the enemy entered our holy places long ago. As Pope Emeritus Benedict XVI lamented, “The Church is on the verge of capsizing.”

LSN: Last year, you helped organize and lead Middle Eastern countries in the worldwide rosary events under the new “Holy League of Nations.” Do you believe that today was the fruit of these prayers, and do you anticipate leading again for the planned October 13 events?

D.C.: Of course, for nothing is lost in the spiritual realm! A single Hail Mary resonates infinitely at the hour of our death and even to eternity! We’re building up. Every battle counts. Every prayer counts. Every soul counts. The time has come for the consecrated children of Mary to unite and fight under our queen’s banner.

The 2018 Global Rosary (the 2018 Lepanto, as we call it) undoubtedly disarmed many of our Enemy’s strongholds and enabled unfathomable graces to enter in and around us. That’s how God’s power is unleashed! The next Global Rosary (which will hopefully include Eucharistic processions and acts of reparation) will be on October 13, 2019. We urge all countries to join forces with us within the Holy League of Nations (HolyLeagueOfNations.com) and replicate our Lebanese consecration, procession, reparation!

Time is of the essence!