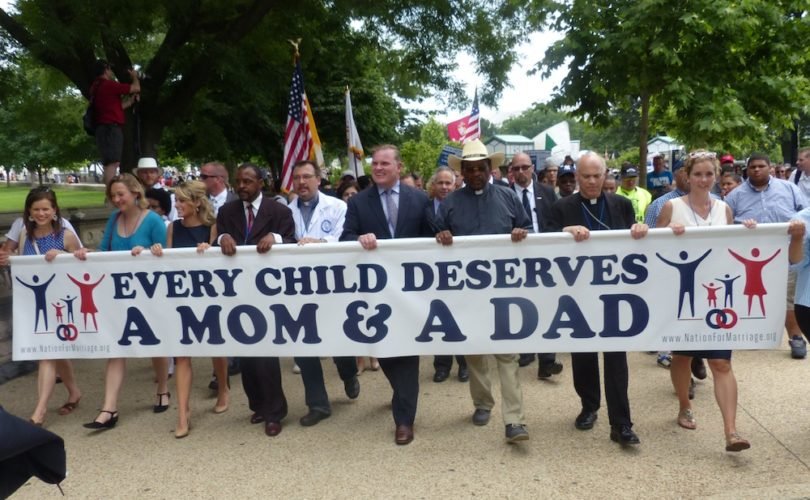 Thousands of marriage activists gathered in D.C. June 19, 2014 for the 2nd March for Marriage.Dustin Siggins / LifeSiteNews.com

WASHINGTON, D.C. – Several thousand marriage activists stood in 90-degree heat on Capitol Hill Thursday to profess the importance of man-woman marriage for the future of America.

The speakers at the 2nd March for Marriage argued for the age-old institution on religious, natural law, political, legal, and other grounds. Hailing from varied ethnic, religious, and political backgrounds, their diversity was as varied as those who gathered on the West Lawn of the Capitol.

Among the policy experts and politicians to speak was Rep. Tim Huelskamp, R-KS, who has introduced a marriage amendment to the U.S. Constitution. Former Arkansas Gov. Mike Huckabee and former Pennsylvania Sen. Rick Santorum drew enormous applause with their speeches.

According to Huelskamp, legislators on Capitol Hill are ignoring the issue of marriage. He noted that the bill he introduced has barely 50 cosponsors, whereas the same bill in 2006 had over 200 votes in support.

According to the Family Research Council’s Leanna Baumer, it is not just older Americans who value family. “Polling this spring reported that over 70 percent of both male and female high school graduates say that marriage and a family are 'extremely important' to them,” she observed.

Huckabee and New York State Sen. Ruben Diaz, a Democrat, pointed to how judges have often overturned state laws on marriage, not the citizens of the states. Both called on same-sex “marriage” supporters to work within the Constitution to make their case, decrying judicial decisions across the country that overturn state laws and amendments approved by citizen votes.

Ludovine de la Rochere, president of France’s Manif pour Tous, which has become famous for its massive demonstrations for marriage, emphasized that “each child needs his father and mother.”

The theme of God was present throughout the more than two hours of speeches. Numerous speakers noted that politicians, courts, and even the public at large may attempt to change what marriage is, but God is greater than any human attempts to change what He created.

A small, ad hoc group of counter-protesters stood in front of the Capitol, numbering perhaps ten. A flier provided to LifeSiteNews said that “religious-based bigotry is the foundation of anti-gay attitudes in our society,” and claimed that “more than a million LGBT teens are suffering debilitating depression because their families and religious institutions see them as deviant.” The theme of the counter-protest was “Love not hate, stop killing us.”

A handful of other protesters met marriage marchers at the Supreme Court.