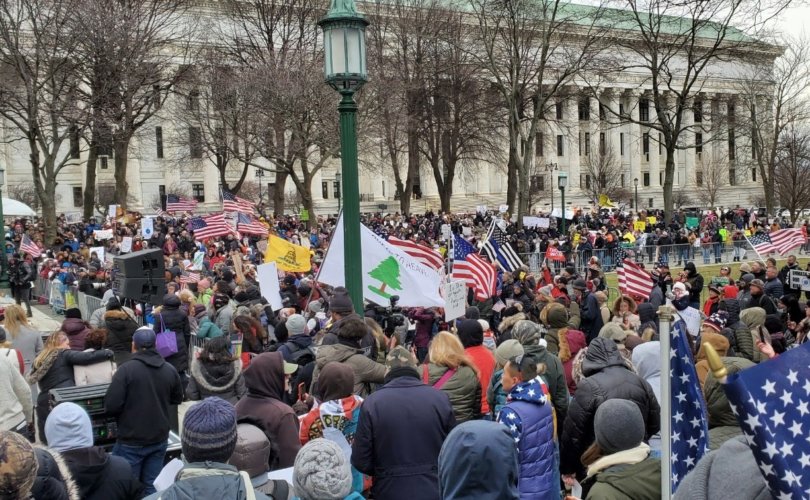 ALBANY, New York, (LifeSiteNews) — Thousands of New Yorkers traveled to their state capital on Wednesday to protest and lobby their representatives against COVID-19 vaccine mandates for children and the implementation of vaccine passports.

In a surprise move on the eve of the event, Democrat Gov. Kathy Hochul — who recently replaced disgraced Democrat Gov. Andrew Cuomo — put in place a new rule requiring proof of vaccination or a negative COVID-19 test in order to gain entry into the Capitol or the Legislative office buildings. Until yesterday all that was required was a mask.

“We want to stop a whole list of bad bills and current really bad policies, like pretending that people who had Covid and recovered have no immunity, firing people who refuse the still experimental shot, vaccine passports, and many others,” read a notice from Children’s Health Defense (CHD), a chief organizer of the March for Medical Freedom. “We want to stop bills that would mandate covid shots for children to attend school, require all adult vaccine records be given to the state and many other bad things.”

“Politicians should not be making medical decisions for us and our children,” continued the CHD notice. “We oppose any law that interferes with the right to make medical decision without coercion from the state, employers, schools, or anyone else.”

“We need to stand up. This vaccine passport nonsense is spreading: Chicago, Boston, DC” noted Teachers for Choice’s Michael Kane. “We need civil disobedience from east coast to west coast.”

@teacher_choice speaks out at the rally against mandates at the NY State Capital building and states ” WE NEED CIVIL DISOBEDIENCE FROM EAST COAST TO WEST COAST “#Civil #mandates #NY pic.twitter.com/rJ4WL9TxHk

The event brought together activists with diverse, often opposing interests, but who have come together to form a frontline coalition against medical tyranny.

“But I’m against passports,” he declared as he held his proof of vaccination card over his head and tore it up, to the delight of the crowd.

At the State Capital building in Albany NY @progressiveact who is fully V rips up his V card in front of thousands of protesters against the mandates #ny #rally #blm pic.twitter.com/YiXn1olcRd

“We are at war,” declared civil rights attorney Tricia Lindsey at the outset of her electrifying speech. “We are at war for our families, our children, our lives.”

“The Fourteenth Amendment gives us due process. It guarantees us equal protection under the law. So why in the world are the unvaccinated being treated differently than the vaccinated?” she asked.

“It is the new segregation, it is the new discrimination,” she said, “and we have to stop it.”

“Government for the people, by the people will not be destroyed. We have to recognize our power,” she continued.

“We have a right to resist, and we have an obligation and a duty to do so,” she said. “They are coming for our children. We cannot sit down.”

“When in the world did we start using children as bullet proof vests for [adults]?” she demanded concerning the New York legislators intention to require vaccinations for K-12 and preschool kids. “When you come for our children, you have started a war.”

“When you want to push something into my body without my consent, it is rape. This is medical rape,” she added.

In what was a clear expression of the recognition that the battle against state-sponsored medical tyranny has a spiritual component, a large group of protesters made their way to the front entrance of the Governor’s mansion to offer prayers for deliverance for the state’s chief executive accompanied by splashing holy water on the gate threshold.

#HappeningNow at the NY Governors Mansion In Albany NY. Protesters against mandates throw holy water at the doorstep of the Governors home #lockdown #VaccinePassports #NY pic.twitter.com/rtgXu6418m

Here are the specific bills and actions of the governor which threaten the medical and religious freedoms of the citizens of New York, and which activists were protesting yesterday: