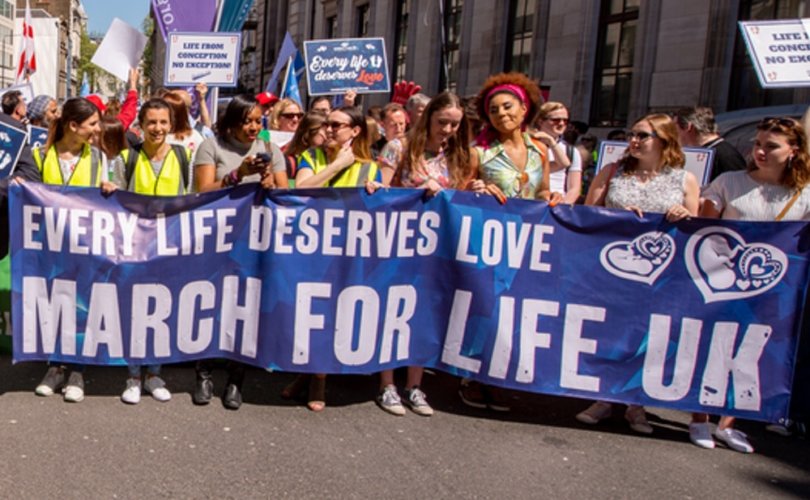 LONDON, May 7, 2018 (LifeSiteNews) – There were two protests in London on Saturday. One was the annual UK March for Life, now in its fifth year, and the first time it had taken place in London. The other was a counter-protest from pro-abortion groups.

The 4,000 strong march started from a central London hotel, where a family friendly pro-life festival took place. The venue was heavily ringed with security provided by a privately financed security firm – such were the concerns of the organizers about possible disruption following the scenes witnessed at last year’s March for Life held in Birmingham.

At last year's event, pro-abortion counter-demonstrators managed to hijack the day. For a considerable time, they blocked the procession through Birmingham city center. The West Midlands Police, tasked with policing and protecting the march, appeared to be powerless to shift the aggressive, chanting crowd blocking the march.  Women, children and elderly pro-life supporters were, as a result, forced to stand in the pouring rain for a prolonged period.

There were no such problems during the Saturday march in London. Francis Carey, Chief Steward for the March for Life, predicted there would be no repeat of last year’s disruption on account of London’s Metropolitan Police being used to accompanying contentious marches through the streets of Westminster. His prediction proved right. The march left on time and arrived in Parliament Square encountering little by way of counter-protest.

Awaiting the March for Life in Parliament Square, however, there was another protest march from pro-abortion groups. Shouting obscenities, they had come simply to belittle and verbally abuse the March for Life participants. Even after the March for Life had proceeded into the square and started its speeches, the counter-demonstration continued throughout to chant from a distance.

This year’s UK March for Life took place against a background of persistent attacks upon life in Britain. The 50th anniversary of the implementation of legalized abortion has just passed. Furthermore, last week, laws came into effect banning prayer or the offer of help outside a London abortion center. This type of prohibition is now expected to be rolled out across the country, assailing as it does – at the behest of the abortion industry – freedom of assembly, freedom of speech and freedom of worship.

In addition, the case of Alfie Evans still throws a long shadow. Many on the march expressed fears that British authorities no longer care about the rights of the most defenseless in society.

For all the darkness enveloping the UK those on the march were in decidedly upbeat spirits. There were people from all over the United Kingdom – families, single people, elderly couples, religious and ‘Vegans for Life’: all marching for life. In short, the march’s participants were a cross-section of largely ordinary British people who had come to London to say of abortion: “Not in my name.”

Bright sunshine welcomed the march as it set off from the hotel. The March for Life then made its way through London’s Covent Garden district before winding down past such historic landmarks as Trafalgar Square and Whitehall, then past 10 Downing Street, before arriving at the green in front of the Mother of Parliaments.

The pro-life marchers were then treated to US singer-songwriter, Joy Villa, speaking unapologetically of her pro-life commitment.  Two speeches, both moving and uplifting, followed. The first was from Rachel MacKenzie of the post-abortive support group, Rachel’s Vineyard. Her personal testimony, and plain speaking, would have silenced any protestors had they cared to listen. After two abortions, followed by a life that spiraled out of control, Rachel finally found what she was looking for: someone to tell her that abortion was wrong but that there was forgiveness.

Next to speak was Clare McCullough, founder of the Good Counsel Network.  She has been at the forefront of attempts to overturn the recent legal moves to prevent prayer and sidewalk counselling outside abortion centres. She gave an equally moving testimony if from a different angle. She talked of the verbal abuse and physical assault that both she and her staff have endured outside abortion centres perpetrated by those pro-abortion groups there to offer ‘support’ to the women accessing such facilities. As McCullough poignantly pointed out: at the end of the day, a baby was going to be born to the women attending the abortion centre – the question was simply was it going to be born alive or dead. Either way, it was going to be traumatic for the woman concerned.

Later, joining McCullough upon the stage from which she spoke were some of the women helped by the Good Counsel Network. Now they told their story. They spoke haltingly and nervously but no less powerfully of the help they had been offered and gratefully received outside abortion facilities, and which allowed them to continue with their pregnancies. Their children were also brought on stage and the obvious love and affection between the mothers and their children spoke volumes about the joy of welcoming life.

The March for Life has continued to grow in size and significance each year. The question in Britain today, however, is not when the next march will happen, but, given the current climate, if in due course such marches will be banned, just like the peaceful prayer and offers of help to pregnant women outside abortion centres.