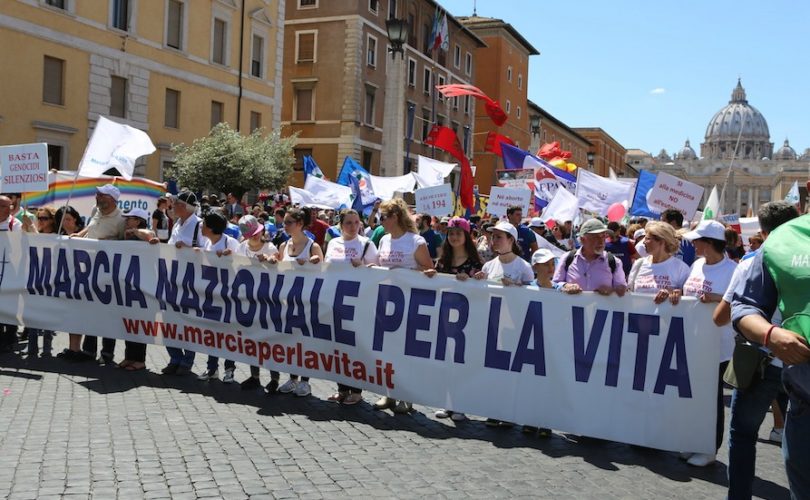 ROME, May 10, 2015 (LifeSiteNews) – The Eternal City got an infusion of youthful enthusiasm today, as thousands of participants in the fifth annual March for Life danced, sang and shouted pro-life slogans as they made their way through Rome’s cobblestone streets under clear, sunny skies.

Many participants gathered in St. Peter’s Square prior to the march, to hear Pope Francis deliver the traditional Sunday recitation of the Regina Coeli at noon. After a meditation on the day’s gospel, the pope briefly greeted the participants in the march, saying that it is “important to collaborate together to defend and promote life.”

Participants then gathered just steps away from the Vatican, on Via della Conciliazione, where they heard testimonies from men and women whose lives had been affected by abortion, before marching through central Rome, finishing at the Piazzale of Bocca della Verità (the mouth of truth).

“We want it to be clear that this march isn’t an exclusively religious march, because the right to life is a universal right, a biological right!” said one of the MCs, Stefano, in kicking off the march rally.

One young woman then recounted how, after she became pregnant at the age of 21, her boyfriend told her that she had to choose between “me or the baby.” “I had no doubt,” she told the crowd, to cheers. “I chose the baby. I had no fear!”

On February 24, 2014, after receiving assistance from a pro-life crisis pregnancy center in Rome, she gave birth to what she called her “perfect baby,” and said she has been able to counsel other women in difficult pregnancies to also choose life.

A young monk with a traditional Benedictine community based in Norcia, Italy, recounted how his parents had aborted his older sibling, and how that abortion eventually tore his parents' marriage apart. But though the abortion brought such suffering, Brother Evagrius says that the experience of the abortion ultimately led his mother to Christ, and she has named her aborted son “Felix,” referring to the section of the “exultet” from Easter Sunday mass that speaks of the “happy fault” of Adam.

Much like other marches for life around the world, teens and young adults made up a significant portion of the participants in today’s march. Crowds of young nuns, priests, and lay youth with the Institute for the Incarnate Word (IVE), and other religious orders and pro-life organizations, chanted slogans like “For life!” and “One mom. One dad. This is true liberty!”

Since its founding five years ago, the Rome March for Life has taken on a distinctively international flavor, with participants traveling from numerous countries all across Europe, as well as Canada and the United States.

In the two days before the march, leaders of numerous pro-life organizations gathered for the second annual Rome Life Forum, during which they heard a keynote address from Cardinal George Pell of Australia, and strategized about ways to spread the pro-life and pro-family message worldwide.

Among the international participants in Sunday’s march were six priests who are studying at the Canadian College in Rome. When asked their motivation for giving up their Sunday afternoons to attend the event, Fr. Kim DeSouza told LifeSite simply that he felt compelled to join, “for the babies.” “That doesn’t sound very sophisticated,” he added. “But I think it’s the truest answer, and the most simple one. One that anyone can understand.”

Most notably, the marchers were joined by Cardinal Raymond Burke, widely known as one of the most outspoken bishops in the world in support of the pro-life and pro-family cause.

At the conclusion of the march, participants were greeted by march organizer, Virginia Coda Nuziante.

“Our categorical rejection of any compromise is not just about abortion, but extends to all forms of violation of the moral law,” she told the crowds, “because this moral law, the natural and divine law, knows no exceptions, is absolute, as inscribed in the conscience of every human being.”

“We know what and how many aberrations threaten us today, starting with the madness of gender [ideology], which in a sense is even more serious abortion, because abortion wants to destroy the physical life, while gender [ideology] corrupts the spiritual life of our children, destroying their innocence and educating them to perversion.”

In closing, the Coda Nuziante said: “We appeal to all the mothers of Italy and the world and let them stand up to this culture of death, stand up to this dictatorship of relativism and nihilism. Raise up the standard of the spiritual and moral life. And parents of these innocent creatures, do not resign, do not make yourselves complicit in this crime, fight with us to erase it from history.”

The date for next year’s Rome March for Life has already been set for the second Sunday in May, 2016.