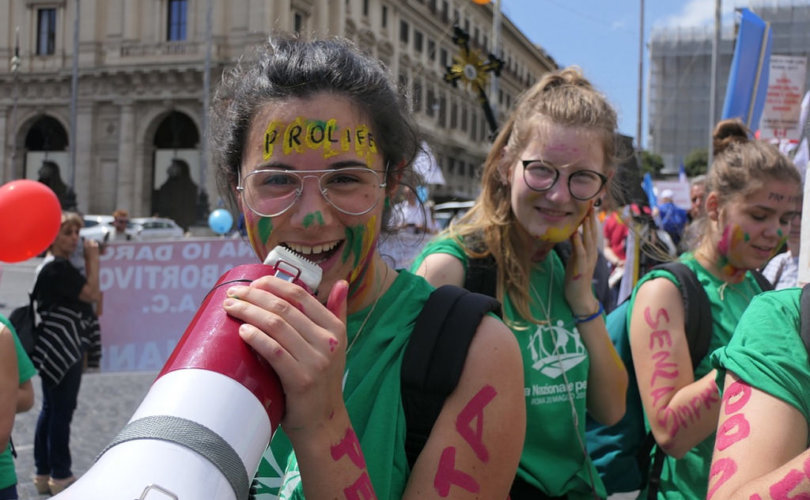 ROME, Italy, May 22, 2017 (LifeSiteNews) – Thousands of Italians marched against abortion and euthanasia on Saturday at the nation's annual March for Life (Marcia per la Vita) alongside Cardinal Raymond Burke, Bishop Athanasius Schneider of Kazakhstan, and Archbishop Carlo Maria Viganò, former Apostolic Nuncio to the United States.

The Rome March for Life is “taking on a life of its own,” Father Francesco Giordano, director of Human Life International's Rome office, told LifeSiteNews.

There were groups of priests and religious from the Institute of Christ the King Sovereign Priest, the Priestly Fraternity of St. Peter, the Institute of the Incarnate Word, the Franciscan Friars of the Immaculate, and the Society of St. Pius X. Students, youth groups, families, and a group of bagpipers from Tradition, Family, Property carried banners and flags. The Italian branch of Rachel's Vineyard and other Christian organizations were represented as well.

The March ended with a rally at which abortion survivor Gianna Jessen urged pro-lifers to be “unashamed of Jesus” and Belgian Professor Stéphane Mercier praised Jesus and the Blessed Virgin Mary. Mercier is facing investigation, and possible sacking, from the Catholic University of Louvain for presenting his students with philosophical arguments against abortion. Jessen was born during a failed saline abortion.

“This is a battle between life and death and we need God's help,” she said. “It's a broken world and broken people need real answers that come from God.”

Jessen had a special message for men and women who have participated in abortion: “The only freedom any of us will ever find from our sin is Jesus.”

She encouraged the many young people attending to embrace chastity.

“Men, you can only be courageous if you know who you are,” Jessen continued. “And you are made in the image of God, just as women are. So stand up and be who you're born to be: protectors of women and children. And be honorable.”

The Marcia per la Vita was just one day after Burke, the former prefect of the Apostolic Signatura and current Patron of the Sovereign Military Order of Malta, called for the consecration of Russia to the Immaculate Heart of Mary.

Some marchers carried images of Our Lady of Fatima. The March was just one week after the 100th anniversary of the first of the Marian apparitions during which the Mother of God warned about the consequences of sin and told three shepherd children to pray the rosary for the restoration of world peace.

Giordano said pro-lifers must “network globally and work locally,” something he took away from the Rome Life Forum.

“Last year, the war was against the so-called gay marriage” in Italy, said Giordano. “Now it’s euthanasia. It seems like everything [is] on the agenda,” and deceptively-worded legislation worsens the problem.

Another “battle to fight” is efforts in Europe to ban pro-life websites, he warned.

But the “hope of our future” are young couples who form big, “holy” families, he said. “I can’t encourage that enough.”