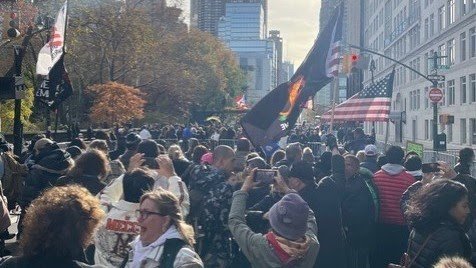 (LifeSiteNews) – Thousands of New Yorkers marched through the city on Saturday to protest mandatory COVID-19 vaccinations, joining millions of others around the planet who also took to the streets as part of a “World Wide Rally For Freedom” in opposition to global medical tyranny.

Chanting “We the people will not comply!” they carried American and Gadsden (“Don’t tread on me”) flags, and signs and banners expressing heartfelt messages:

A NYC first responder, recently forced to retire due to the onerous mandate, participated in Saturday’s march and supplied LifeSiteNews with pictures and videos. He said the most touching moment of the day was when he came across three NYC firefighters wearing shirts with the message “Bravest for Choice” emblazoned across their chests.

“While the churches were closed here in NYC and the flock denied the sacraments, these brave men served the city of NY courageously throughout the pandemic — exposing not only themselves but their families as well to this virus,” he told LifeSiteNews.

What irked me the most was this evil mandate was issued on October 20 by Mayor Bill DeBlasio, and the next night, October 21, the Archbishop of New York was dining at the $5,000.00 per plate Al Smith Dinner with DeBlasio, the same man who issued this mandate and who would soon be placing these brave men on “leave without pay,” pending either termination or forced inoculation.

Those three men in the photo are in that predicament right now!

“The FDNY has approximately 1,000 religious exemptions submitted; the NYPD approximately 6,000. My guess, knowing the demographics of both these agencies, most of these men and women are Roman Catholics,” he explained. “We are expecting responses on Thanksgiving Day, [but] confidence is not high though and appeals and lawsuits will be forthcoming.”

The global movement that sparked Saturday’s worldwide demonstrations is a loose association of individuals “dedicated to emboldening citizens to push back against coronavirus-related restrictions in their countries,” and stands for five key freedoms: speech, movement, choice, assembly, and health.

“Authoritarian coronavirus restrictions have damaged our lives more than any virus has, and even if the effects of the virus were more damaging, the restrictions to our freedoms would still have been unjust and unlawful,” says the movement’s website. “Our fundamental freedoms have top priority, and we cannot allow them to become constrained, for the sake of the generations that follow us.”

“As the Freedom Movement develops around the world, a variety of new solutions are rising that will enable people to Take the Power Back,” it continues. “An International Freedom Movement is emerging that is building alternatives to established power structures, and ways of living. People are choosing to leave densely populated areas and forming new communities where they can more effectively govern themselves.”

Last month, thousands of New York City employees marched across the Brooklyn Bridge to City Hall in Manhattan to stand up for freedom against the COVID-19 jab mandate for city workers.

Protesters participating in the earlier march included firefighters, police officers, paramedics, and schoolteachers, as well as members of the Department of Sanitation, the Department of Transportation, and other city agencies.