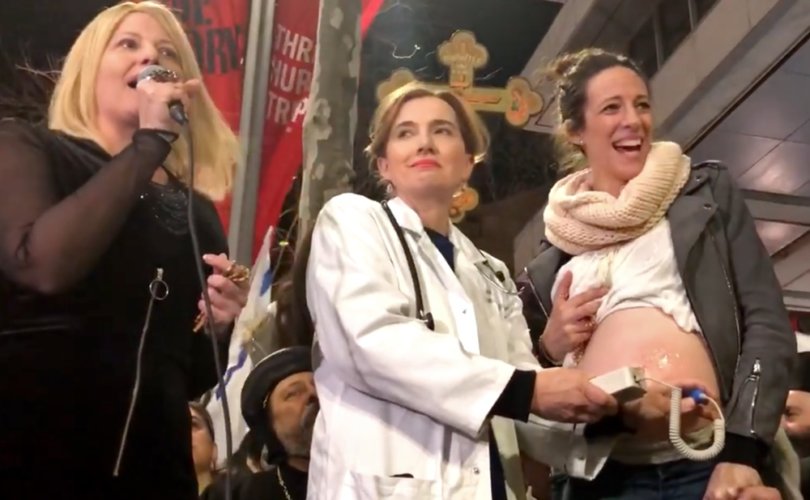 SYDNEY, Australia, August 20, 2019 (LifeSiteNews) — As the winter night fell in Sydney, thousands amassed in the heart of the city, protesting a radical proposed new law permitting abortion on demand until birth.

The rally began in Martin Place, a pedestrian mall in the center of Sydney’s business district, at 6 PM and lasted until 9 PM. Thousands of protestors marched from Martin Place to the front of New South Wales Parliament buildings where legislators in the state’s Legislative Council, or upper house, were debating the bill.

Paul Hanrahan of Family Life International Australia told LifeSiteNews that he thought close to ten thousand pro-life advocates attended. There were speeches by the Archbishop of Sydney and other religious leaders and politicians, as well as an ultrasound demonstration that amplified the sound of the beating heart of an unborn baby over the large crowd.

“I’ve never seen this many people at a pro-life event in Australia or so engaged,” Hanrahan said.

“It was a very vocal protest.”

The rally was organized by the New South Wales Right to Life and co-sponsored by several other groups, including Family Life International, the Roman Catholic Archdiocese of Sydney, the Maronite Eparchy, and the Melkite Greek Catholic Eparchy. It was a peaceful protest, untroubled by pro-abortion activists.

“The New South Wales police presence was very strong, and there was no significant counter-presence,” Hanrahan explained.

Hanrahan said that the Bill is controversial even for the way it was introduced.

“It was pushed into the Parliament,” he told LifeSiteNews.

“They had a desire to ram it through without public consultation,” he continued, and explained that this was very unusual.

“They tried to pull a ‘swiftie’ on the people of New South Wales.”

The Bill was introduced by an Independent member of the lower house named Alex Greenwich, backed by Penny Sharpe of the Labour Party, on August 1. The way it was rushed through the Legislative Assembly “caused a stink,” Hanrahan said.

Although Sydney is the largest city in Australia, home to over 4.6 million people, Hanrahan is not surprised that the specter of the pro-abortion bill brought thousands out to protest.

“Sydney is the strongest Catholic city [in Australia],” he explained and credited the healthy spiritual state of the Church there to the influence of Cardinal George Pell, who was the Archbishop of Sydney from 2001 until 2014. Among Pell’s other accomplishments, he successfully lobbied for World Youth Day 2008 to take place in the city.

The doctor who appeared on stage to give an unborn baby a voice through the ultrasound machine was Dr. Catherine Lennon, a Sydney-based expert in fertility and women’s health.

“Tonight there was a massive rally outside NSW parliament to oppose an extreme abortion bill that would allow abortion up to birth and even the death of babies born alive during an abortion procedure in late-term abortions who would be left to die,” she told LifeSiteNews in a statement.

“Already a similar Abortion reform bill passed in Victoria 2008 has tragically resulted in an increase in late-term abortions and hundreds of babies born alive during abortion procedures who were left to die,” Lennon continued.

The doctor noted that the Reproductive Healthcare Reform Bill 2019 allows abortion for almost any reason, including sex selection, up to 22 weeks,  and after 22 weeks with approval of two doctors. Not even conscience rights of those who do not want to participate in committing abortions are fully respected.

“The conscientious objection section requires doctors if asked by a pregnant woman to refer her to an abortion provider or another doctor who is a supporter of abortion, even if the woman is almost at her due date,” Lennon wrote.

“This is a breach of fundamental human rights  —  no worker should be forced to participate in the killing of an innocent human being, and referring a woman for late-term abortion is participating in organising an abortion through that referral process. “

She called the bill “extreme” and agreed that it was rushed through parliament.

“We need to ditch this extreme [New South Wales] abortion bill and focus on improving support for pregnant women and better access to independent counseling,“ she concluded.

All the Australian states have different abortion laws. New South Wales is currently the only state in which abortion is still considered a crime. Since 1971, however, abortion has been considered lawful if a doctor believes that pregnancy poses a serious danger to the mother’s life or physical or mental health.