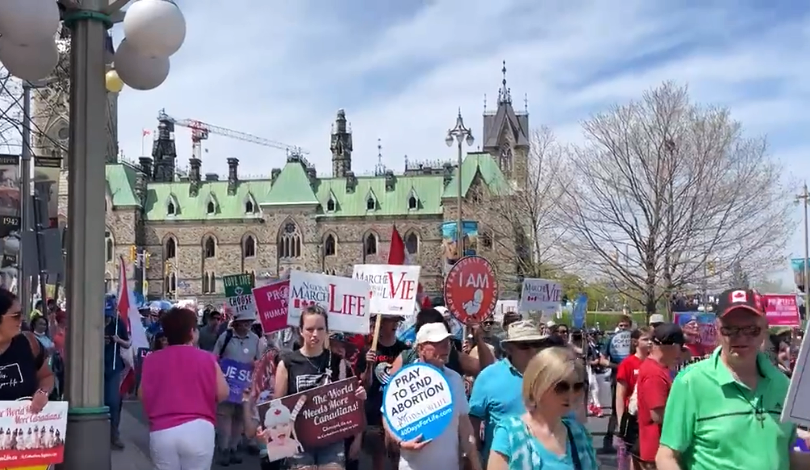 OTTAWA (LifeSiteNews) — Thousands of Canadians gathered in the nation’s capital of Ottawa on Thursday to demand an end to the human rights injustice of abortion.

The annual National March for Life organized by Campaign Life Coalition was a success as thousands of Canadians marched through the city of Ottawa to voice their support for the dignity of unborn children and to call for an end to the diabolical practice of abortion.

Thousands of Canadians are marching for the pre-born. Canada currently has no laws on abortion. #cdnpoli pic.twitter.com/cr7iL8eiil

The event kicked off at 12:30 p.m. with a rally on Parliament Hill, followed by a 1:30 p.m. march through Ottawa’s downtown core, and is ending with Silent No More Awareness testimonies.

While the majority of those in attendance were there in support of the march, there was also a collection of pro-abortion activists holding signs in favor of a woman’s “right” to have her baby murdered inside the womb.

The pro-life movement in Canada has been revitalized in recent days in light of the leaked U.S. Supreme Court opinion that purports to overturn Roe v. Wade, the 1973 case that “guaranteed” abortion as a “constitutional right.”

While Canada has never enshrined abortion as a “right,” the country lacks any federal laws regulating the ghastly practice, meaning women in Canada can have their unborn child killed up until the moment of birth.

In addition to the legal silence regarding abortion, six of 10 provinces — British Columbia, Alberta, Ontario, Quebec, Nova Scotia, and Newfoundland & Labrador — have gone as far as prohibiting pro-life advocates from witnessing outside abortion facilities with “bubble zone” legislation.

According to Campaign Life Coalition’s website, abortion has killed over 4 million preborn babies in Canada since its legalization in 1969, roughly totaling the population of the province of Alberta.

While official statistics are difficult to pin down, for every four babies born alive in Canada, one is killed in the womb via intentional abortion.