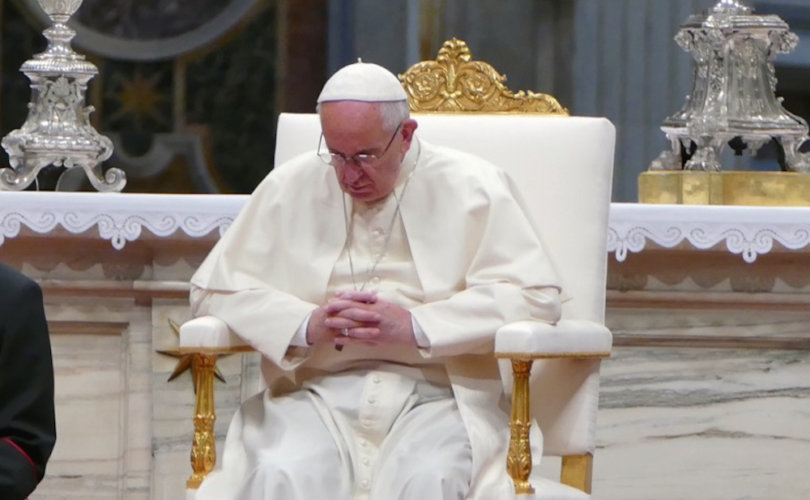 August 30, 2018 (LifeSiteNews) – A group of prominent Catholic women have written an open letter to Pope Francis imploring him to provide clarity on the “escalating” sex abuse crisis currently “engulfing” the Church.

Expressing anger, betrayal, and heartbreak, the women bluntly ask Pope Francis if Archbishop Carlo Maria Viganò’s detailed testimony about sex abuse being covered up by Vatican officials, including the Pope, is true or not.

“We are Catholic women deeply committed to our faith and profoundly grateful for Church teachings, the Sacraments, and the many good bishops and priests who have blessed our lives,” they write.

They also call on him to publicly state when he learned of the “abhorrent” allegations against now ex-Cardinal McCarrick and if he knew about and lifted sanctions reportedly imposed on him by Pope Benedict.

“We, your flock, deserve your answers now,” the women’s letter reads. “The answers are surely known to you.” These are “devastating” allegations that have caused our hearts to be broken and faith tested, it adds. “To your hurting flock, Pope Francis, your words are inadequate. They sting.”

Be “honest with us. Please, do not turn from us,” they write.

On his return flight from the pro-LGBT World Meeting of Families in Dublin, Ireland Sunday, Pope Francis refused to confirm or deny the allegations made by Archbishop Viganò. “I am not going to say a word about this,” he told a journalist from CBS.

As of this writing, 10,858 women have added their name to the letter, with hundreds being added by the hour. The letter is not sponsored by any group or organization and is only the personal initiative of those who signed it, which includes wives and single women but also consecrated women and religious sisters.

“We are the mothers and sisters of your priests, seminarians, future priests and religious,” the letter reads. “We are the Church’s lay leaders, and the mothers of the next generation. We are professors in your seminaries, and leaders in Catholic chanceries and institutions. We are theologians, evangelists, missionaries and founders of Catholic apostolates.”

Some of the more well-known signatories of the letter include:

“We are the people who sacrifice to fund the Church’s good work. We are the backbone of Catholic parishes, schools, and dioceses. We are the hands, the feet, and the heart of the Church. In short, we are the Church, every bit as much as the cardinals and bishops around you,” the women state in the letter.

“Please do not keep us at arm’s length on these questions,” the letter begs. “We are faithful daughters of the Church who need the truth so we can help rebuild. We are not second-class Catholics to be brushed off while bishops and cardinals handle matters privately. We have a right to know. We have a right to your answers.”

The letter points out that the Pope himself said in his 2013 apostolic exhortation Evangelii Gaudium that he desires “a more incisive female presence in the Church,” and that “women are able to pose questions that we men are not able to understand.”

The letter supports calls for an investigation into the claims put forth by Archbishop Viganò. “The victims who have suffered so greatly need to know they can trust you. Families, who will be the source of the Church’s renewal, need to know we can trust you, and thus trust the Church.”