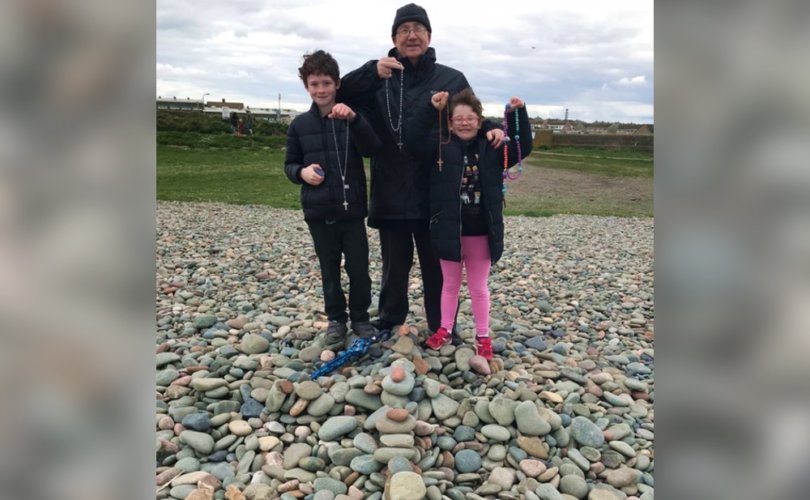 Nick Donnelly with his nephew and niece Daniel and Katherine during Rosary on the Coast event April 29, 2018. Nick Donnelly / Twitter

GREAT BRITAIN, April 30, 2018 (LifeSiteNews) — An estimated 30,000 people attended Britain’s Rosary on the Coast on Sunday afternoon to pray for faith, life, and peace in the British Isles.

The massive prayer service was held at 3 PM in over 400 locations around Great Britain, ranging from the Shetland Islands north of mainland Scotland to the Island of Jersey, nineteen miles from the coast of France. Whereas most of the participants gathered on spots along the sea coasts, others prayed by Scotland’s Firth of Forth and other principal waterways, like London’s Thames River.

The participants prayed for a re-flourishing of the Catholic faith in the British Isles, for peace throughout the world, and in reparation for the over 8 million abortions committed in the country since the Abortion Act of 1967.

“As [we are] a group which has the ultimate goal of the reconversion of our nation to the Catholic faith, Rosary on the Coast was an obvious initiative for us to support,” Hamid told LifeSiteNews.

He said that the penitential walk to the harbor, which incorporated traditional hymns and devotions, was a “great witness to people we met along the way.”

Hamid said that the Confraternity was “grateful” to Archbishop Cushley for joining them at the Rosary site.

“We are particularly grateful to him for his participation as he provided a link with the universal efforts of the event to promote faith, life, and peace.”

It was an impressive turnout in a country in which Catholics are a small minority, comprising just over 8% of the residents of England, Wales, and Scotland.

British Member of Parliament Jacob Rees-Mogg, a Catholic, was among those who sent greetings and encouragement to the Rosary on the Coast organizers.

“This is an extremely important initiative as the Rosary has been one of the most powerful forms of prayer since it was given by the Blessed Virgin to St. Dominic,” he wrote.

Aberdeen! Amazing the passion and creativity unleashed by #Rosaryonthecoast pic.twitter.com/h3U4ALSy7R

“Pope St. Pius V, known as the Pope of the Rosary, established the Feast of Our Lady of the Holy Rosary and attributed the victory at the Battle of Lepanto 1572 to the intercession of Our Lady after he had asked all of Europe to recite the Rosary,” he continued.  “Many subsequent Popes have had a special devotion to the Rosary, including Pope St. John Paul II.”

The UK Rosary on the Coast was inspired by last October’s Polish Rosary to the Borders, in which approximately two million Catholics participated, and by last November’s Irish Rosary at the Coasts for Life and Faith, which drew thirty thousand.

On February 2, Americans participated in the Rosary to the Interior. Another American mass-Rosary, “Rosary Coast to Coast”, is being planned for Sunday, October 7, 2018.