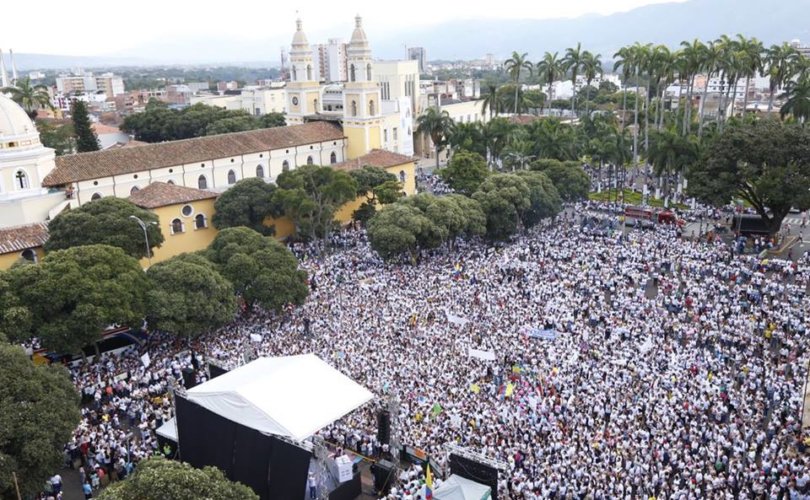 August 11, 2016 (LifeSiteNews) – Thousands marched yesterday in protests held throughout Colombia to protest a new initiative of the country’s homosexual Minister of Education to implement homosexualist and transsexualist gender ideology programs in Colombian schools.

“No to gender ideology! Mr. President, Ms. Minister, listen to us!” speakers told a crowd of thousands gathered in the city of Bucaramanga. “Long live the rights of children! Long live the family. United, it will never be defeated!”

Protesters called for the resignation of Education Minister Gina Parody, who is requiring all the schools of the country, public and private, to revise their student manuals to protect students from “discrimination” over their sexual orientation or internal “gender identity.”

Parody, a homosexual who has admitted publicly to be in a sexual relationship with Minister of Commerce, Industry, and Tourism Cecilia Álvarez-Correa, is seeking to carry out a 2015 decision of the nation’s Constitutional Court in favor of LGBT student “rights.”

In the past two weeks, the Constitutional Court has ruled twice that “transgender” students in two different schools must be allowed to wear clothing appropriate to the opposite sex.

Parody’s plan for revising the student handbooks includes a pamphlet she designed in conjunction with the United Nations Population Fund (UNFPA) and other UN agencies to instruct schools on how to induce students to “respect” and “value” transgenderism and homosexuality.

The pamphlet, the first of a series titled “School Environments Free of Discrimination,” is titled “Non-Hegemonic Sexual Orientations and Gender Identities in the School: Aspects for Reflection,” and has caused such revulsion among Colombians that the Ministry of Education has begun to distance itself from it.

Gina Parody and the Ministry of Education have been seeking to quell the outrage by claiming that the”pamphlet is not yet complete, and assuring schools that they won’t receive dictates of precisely what to place in their student handbooks.

However, one Catholic school has already been required by the Ministry of Education to remove phrases from its student handbook condemning homosexual relationships.

Our Lady of Good Counsel High School was ordered earlier this year to expurgate from its student handbook the affirmation that homosexual behavior “gravely damages the physical and moral integrity” of students.

The nationwide protests, organized by the Standard-Bearers of the Family (“Abanderados por la Familia”) were endorsed by the nation’s Catholic bishops as well as Evangelical leaders, who called upon the faithful to manifest their rejection of the gay agenda and to defend the family.

“We reject the implementation of gender ideology in the education system in Colombia, because it is a destructive ideology, it destroys the human person,” said the Cardinal Archbishop of Bogotá, Rubén Salazar Gómez, on the eve of the march. “It takes away from him the fundamental content of the complementarity between men and women.”

“We congratulate the parents and civil organizations of different faiths who in recent days have publicly expressed their concern over the implementation of gender ideology in the revision of the student manuals,” said the vice-president of the Colombian Episcopal Conference, Archbishop Oscar Urbina Ortega, in a statement representing all the Catholic bishops of the country.

“We lament that the Constitutional Court and now the Ministry of Education are abusing the law to promote gender ideology in the most diverse areas of our society,” Urbina Ortega added, calling it an “attack against the family as an essential institution of the society, against the educational autonomy, religious liberty, and the right of parents to determine the education of their children, liberty of conscience, freedom of association, and the right of children to receive an education in accord with the ethics and morals of their parents.”

The initiative of Parody and the Ministry of Education has also been condemned by Colombia’s Attorney General, Alejandro Ordóñez Maldonado, who warns that Colombians are “faced with the design of an institutional agency that seeks to indoctrinate our children in gender ideology.”

Ordóñez Maldonado regards the initiative as an attack on the right of conscience. “Our citizens cannot be obligated to act against their consciences,” he told the El Espectador newspaper. “No law, nor an administrative decision, nor a juridical decision can violate the conscience.”

Despite the open feuding between two of his cabinet officials, Colombian president Juan Manuel Santos has not made his views known on the matter.

Ángela Hernández, a provincial deputy who was one of the first to sound the alarm against the initiative, raised the specter of boys entering girls’ bathrooms, and noted, “If in Colombia there are so many parents interested in having their children grow up with these practices, they’ll create LGBTI schools. Let’s see how many people sign up.”