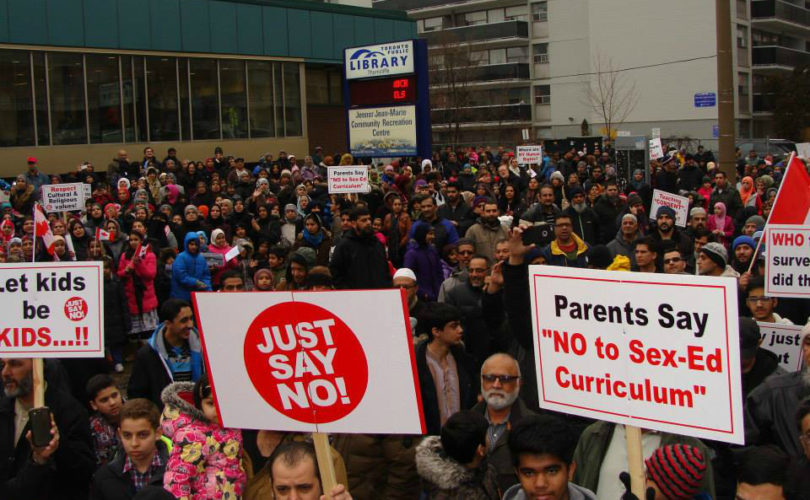 TORONTO, March 16, 2015 (LifeSiteNews.com) — Thousands of demonstrators took to the streets Saturday in Toronto’s Thorncliffe Park, a predominantly Muslim east-central district in the heart of Ontario Premier Kathleen Wynne’s Don Valley West riding, in what organizers say is just the beginning of an exploding grassroots campaign against the openly gay premier’s controversial sex-ed curriculum.

The protestors waved placards and chanted loudly as they marched from Thorncliffe Public Library to Thorncliffe Public School, where they remained for about an hour. The Subway to Damascas blog disputes the “hundreds” reported by mainstream press, saying that more than 2,000 people took part.

Khalid Mahmood, president of Thorncliffe Parents Association (TPA), which organized the event, said that 2,500 people attended. He told LifeSiteNews in a telephone interview that TPA now numbers about 4,500 people, is growing steadily, and is planning more protests.

Nearly 90 percent of Thorncliffe Park’s predominately Muslim population voted for Wynne because of her apparent support of multiculturalism, Mahmood said, but now they have a “sense of betrayal.” Wynne “has an agenda not suited to our community,” charges the father of two boys and three girls.

As for the possible accusations of “homophobia” against his group, Mahmood said Muslim parents have a right to oversee what their children are taught in public schools. “We are not against gays or lesbians,” he told LifeSiteNews.

TPA is meeting soon to plan their next event, and will be updating their Facebook page, Mahmood said. They plan to eventually rally at Queen’s Park, and will attend the April 14 rally already planned there.

Other protests are in the works.

A March 24 demonstration in front of the the Peel District School Board has been organized by the Brampton-based Home Owners Welfare Association (HOWA).

HOWA will be handing out “opt-out forms” to parents at the March 24 rally, Warmington reported.

Sodhi told Mississauga News reporter Nouman Khali on March 8 that, “It’s like our homes are at fire. Together with all communities, we are going to stop this curriculum.”  He added: “We’re just ordinary parents and don’t want to get involved in any kind of politics. We are just calling to remove inappropriate material from the curriculum.”

Liberal MPPs Bas Balkissoon and Soo Wong, and public school trustee Mauna Wong, recently faced the wrath of determined parents at Scarborough’s Agincourt Collegiate. Balkissoon shut down a March 12 information session after an hour because of interruptions, boos and chanting from about 200 parents, as 150 participated in a protest outside organized by the Parents Alliance of Ontario.

And well before Liz Sandals officially released the sex-ed curriculum on February 23, parents groups were expressing concerns, with 1,000 attending a February 20 meeting in Mississauga, and 150 parents at a February 8 Bramalea town hall.

About 400 attended a serendipitously planned protest rally February 24 at Queen’s Park, a day after the sex-ed curriculum’s release. Speakers included angry parents, as well as two Progressive Conservative leadership hopefuls, MPP Monte McNaughton and MP Patrick Brown. McNaughton told the crowd he had been the only MPP to speak out against the sex-ed curriculum.

Parental uproar against sex-ed explodes as call for a referendum emerges: Liberal MPP flees from program