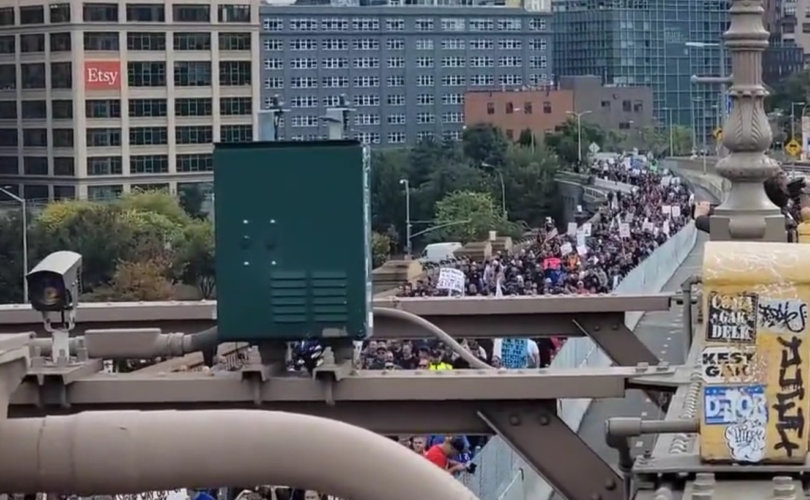 BROOKLYN, New York (LifeSiteNews) — Thousands of New York City employees took to the streets Monday, marching across the iconic Brooklyn Bridge to stand up for freedom against the city’s coercive COVID-19 jab mandate for city workers.

According to a report by the National Review, the protest spanned the Brooklyn Bridge and ended on the Manhattan side in front of City Hall.

Protesters, including police officers, emergency medical responders, uniformed firefighters and members of other city agencies, chanted “USA” while marching across the bridge carrying American flags, Gadsden (“Don’t Tread on Me”) flags, Back the Blue flags, and a variety of anti-mandate signs.

Signs carried by the protesters bore phrases such as “Do Not Comply,” “The Final Variant Is Communism,” “Their Problem with Natural Immunity Is That It’s Free,” and “If they are exempt from LIABILITY, we should be exempt from mandates.”

Protesters participating in the Monday protest included firefighters, police officers, paramedics, and school teachers, as well as members of the Department of Sanitation, the Department of Transportation, and other city agencies.

Oren Barzilay, the president of the New York’s Emergency Medical Services (EMS) union attended the protest. He said half his workforce is unvaccinated and questioned the necessity of forced vaccination when so many people have already developed natural immunity.

“All our members were exposed to this disease and we developed our natural immunity,” Barzilay told ABC7. “If we have the natural antibodies in our body, is it necessary to really inject something else into our body? When it’s still early. It’s only 10 months into it, the vaccination process.”

This is happening right now in New York City! Glorious protest for freedom from tyranny and this absurd Nazi like vaccine mandate. #NoVaccineMandates #NYC pic.twitter.com/4N6dQ96yBR

“Stop this nonsense, and the mandate,” Sliwa said.

The National Review reported that an NYPD detective who was standing guard at the perimeter of the demonstration told the outlet, “If I wasn’t on duty now, I’d be on the other side of the barricade.”

The large protest came less than a week after Democratic NYC Mayor Bill de Blasio broadened the existing injection mandate to encompass all public employees, and eliminated the option for workers to participate in weekly COVID-19 testing rather than take the abortion-tainted shot.

Per de Blasio’s expansion of the mandate, workers must get at least one dose of the experimental drug by Friday or face being placed on unpaid leave.

To date, days ahead of the Friday deadline, some 50,000 NYC municipal workers have opted not to take the shot.