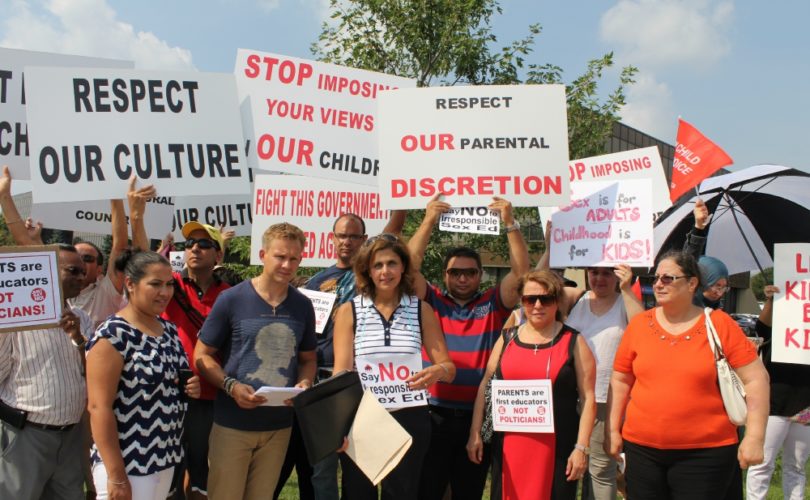 TORONTO, September 2, 2015 (LifeSiteNews) – As thousands of “outraged parents” gathered today in front of 103 of the 107 MPP constituency offices across Ontario, organizers are claiming this latest grassroots protest against the Liberal government’s sex-ed curriculum is an “unqualified success.”

“I think this is the biggest provincial protest in Ontario’s history,” says Jack Fonseca, project manager of Campaign Life Coalition, which organized the mini-rallies.

“Thousands of parents and concerned citizens took to their MPPs offices today,” he told LifeSiteNews, even though, he pointed out, this is a working day for many people.

“This puts the lie to Premier Kathleen Wynne’s claim that Ontarians are okay with the sex-ed curriculum. Clearly, they are not.”

Moreover, “we’ve got wall-to-wall media coverage,” Fonseca said. He’s been fielding numerous calls from local and national media about the protests, particularly from radio and newspapers, while LifeSiteNews Managing Director Steve Jalsevac, who is active in the Canadian Families Alliance (CFA), a grassroots coalition against the sex-ed, appeared on CTV News this morning as well.

Campaign Life’s Twitter feed, which is still buzzing with updates from media outlets and protesters across the province, shows photo after photo of groups of adults and children in locations all across Ontario – Nepean, Thunder Bay, Sudbury, Guelph, Orleans, Whitby, Ottawa, Brampton, to name a few – all similarly gathered in front of Liberal, NDP and Conservative MPPs offices, holding signs such as: “Let kids be kids.”

“The numbers are still coming in,” Fonseca told LifeSiteNews, “but so far we have three ridings where there were over 100 protesters, and one with 91 protesters.”

And although no one officially signed up from High Park-Parkdale, NPD Cheri DiNovo’s riding, there were reportedly about four people rallying there.

Minister of Education Liz Sandal’s Guelph constituency office had between 40 to 50 protesters, while those outside Liberal Bill Mauro’s office in Thunder Bay faced a small counter rally.

And the 30 or so protesters outside Minister of Finance Charles Sousa’s Mississauga office sang a version of Bob Marley’s “Stand up for your rights!” while dozens showed up outside Christine Elliott’s office in Whitby, even though the Tory MPP has now resigned.

According to organizer Sarah Proud, Tory MPP for Lanark-Frontenac-Lennox and Addington Randy Hillier joined the protest. He “even held a sign and spoke to” the 30 or so people gathered at the Perth constituency office, she noted.

And Kitchener Waterloo Liberal MPP Daiene Verneil evidently came out to talk to the protesters, although details of the conversation were not available at deadline.

Chatham Conservative MPP Rick Nicholls was quoted in the Chatham Daily News as being, in the reporter’s words, “concerned about how child sexual predators can manipulate what will be taught in the new sex-ed curriculum,” and that he has “heard from teachers who are not comfortable about having to teach this curriculum.”

Nipissing Tory MPP Vic Fedeli reportedly told protest organizer Joe Sinicrope that the Liberal government should listen to the 185,000 people who signed a petition asking for repeal of the curriculum.

Fedeli was quoted in the Nipissing Nugget saying, “People were absolutely not listened to,” and that Kathleen Wynne “dismissed parents’ concerns. She clearly rushed into the process.”

Some of the Liberal MPPs reportedly gave parents the cold shoulder, noted Fonseca.

Protesters arrived at the office of Liberal Chris Ballard of Newmarket-Aurora to find “the lights were turned off and the doors were locked.” When an enterprising rally participant called the office, however, “someone picked up the phone.”

“Why did our MPP refuse to book us for a conversation about the radical sex-ed agenda?” tweeted Alex Rascanu about the Minister of Aboriginal Affairs and MPP for Willowdale.

About 40 members of the Concerned Parents of Peterborough gathered outside the office of Liberal MPP Jeff Leal. According to a statement by CPP director Laura Van Bakel, “The sex curriculum is age-inappropriate, too explicit and nudges children toward premature sexual experimentation. We’re going to demand our MPP work to scrap this irresponsible program.”

John-Henry Westen, co-founder and Editor-in-Chief of LifeSiteNews, was at the Pembroke office of Tory MPP John Yakabuski and impressed by a turnout of 80 people in “the most sparsely populated riding in the province,” noting that some people “drove for hours” to attend.

Yakabuski was in Toronto, but his “representative said that the Liberal government had not properly consulted parents before imposing the curriculum.”

Organizer Yvonne Dienesch told the crowd that the curriculum was “written under the direction” of the former deputy minister of education and “convicted child pornographer, Benjamin Levin.”

Parents have every reason “to see his involvement in the writing of sexual instructions for children as a red flag, given that so much of this curriculum gives children as young as six, too much information, too soon, and has an undertone of sexual permissiveness,” Dienesch said.

Westen noted that their local federal MP Cheryl Gallant had raised the matter in Parliament, even though sex-ed is under provincial jurisdiction. Her statement in the House of Commons, which decried the curriculum as written by a child pornographer, “a hand-picked provincial Liberal deputy minister” and “powerful party insider” who was “caught only after an international online probe,” was handed out to interested demonstrators.

CLC’s Fonseca told LifeSiteNews that he expected such a result, because the anger of the parents at the controversial sex-ed curriculum runs deep.

This latest protest against the sex-ed curriculum follows numerous rallies, a 185,000-name petition to repeal the curriculum, a 5,000-plus rally at Queen’s Park, a school strike during which parents pulled over 35,000 kids from school, and the formation of CFA, which represents over 200,000 Ontarians opposed to the sex-ed, which is to be rolled out in a few days in all the province’s publicly funded schools.

Those opposed to the sex-ed curriculum will continue to put “unbearable pressure” on MPPs until the curriculum is repealed – or until the time comes for “outraged parents to vote.”