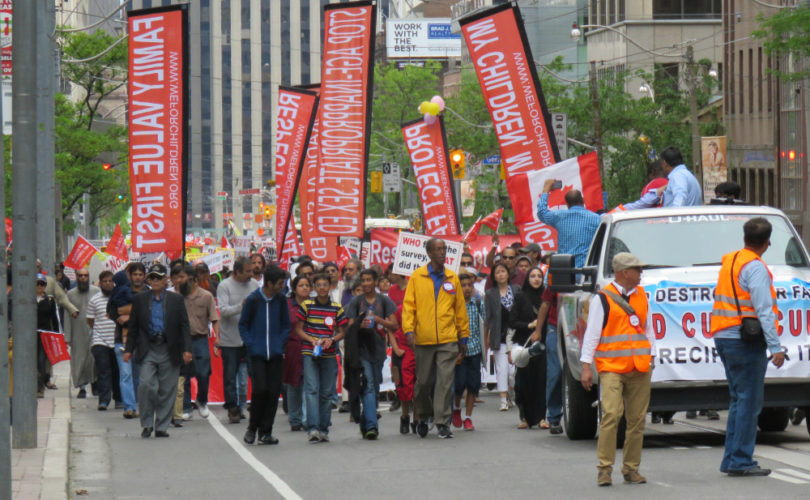 TORONTO, June 8, 2015 (LifeSiteNews) — Thousands of parents took to the streets Sunday afternoon to protest the Ontario Liberal government’s radical sex education agenda, marching through the heart of Toronto’s financial district with the message “We say no! We say no!” and calling on Liberal Premier Kathleen Wynne to resign.

There were at least 5,500+ protestors in the march down University Ave, according to a LifeSiteNews count that was corraborated by one of the organizers after careful review of video footage of the entire line of marchers passing by. During the rally and speeches at Queen's Park preceding the march, also organized by the Canadian Families Alliance (CFA), the crowd appeared to be even larger. Media, however report only 2,000.

Over 65 busloads, each carrying a maximum 48 protestors, came from across the GTA, including Scarborough, Mississauga, Erin Mills, and Thorncliffe Park to attend the sit-in and march that launched the CFA, an umbrella organization representing over ten parent groups, six cultural associations, and 200,000 concerned citizens.

The mood was not conciliatory as speakers expressed frustration with the Wynne Liberals, while the crowd chanted noisily, “No more Liberals! No more Liberals!” or “Resign! Resign!” and even at times, “Liberal loser! Kathleen loser!” Speakers also vowed to make the sex-ed curriculum an issue in the federal election campaign.

“We say no to the sexualization of our children!” CFA speaker and retired teacher Lou Iacobelli told the June 7 rally. “We say yes to parental rights!”

Iacobelli vowed the protests will continue if Wynne persists in ignoring parental concerns. The CFA will call for the resignation of Wynne and Education Minister Liz Sandals and hold more protests at Queen’s Park and at MPPs’ offices.

Parents will pull their kids out of school in the fall rather than subject them to this sex-ed curriculum, Iacobelli stated, adding that a Syrian family told him they are contemplating returning to that war-torn country to escape Wynne’s radical sex-ed agenda.

“Let’s call it what it is! It’s indoctrination!” Iacobelli told the crowd. “Levin’s hands are on it” – a reference to Ben Levin, now serving a three-year sentence on three child-pornography related convictions.

As Ontario’s deputy education minister in 2009, Levin was in charge of curriculum development and is regarded as the architect of the 2010 sex-ed curriculum, shelved after parental backlash. The 2015 curriculum is virtually the same. “Parents just don’t want it,” Iacobelli said. “It isn’t science. It’s child abuse.”

But Wynne appears determined to roll out the sex-ed curriculum in all Ontario’s publicly funded schools this September, despite the growing opposition.

That opposition now includes the CFA 185,000-name petition presented at Queen’s Park June 1 by MPP Monte McNaughton, a week-long school boycott in early May during which an estimated 70,000 kids were pulled from Ontario’s public schools, and numerous protests from London, Ottawa, Windsor, and across the GTA, including several in Wynne’s own predominately Muslim riding of Don Valley West.

At one Mississauga protest Wynne was shouted down by angry parents. At another in Toronto’s Thorncliffe Park, she escaped angry parents outside a school by taking the fire exit.

After a six-member delegation met Wynne April 29 asking that the curriculum be withdrawn, they reported that the Liberal premier was “implacable.”

“Canada has never witnessed such a dictatorship,” CFA’s Maggie Amin told the crowd, pointing out that the sex-ed curriculum “creates division” between parents and children. “Our children will be taught to challenge their parents.” She also noted that “our children and their safety is a federal issue” and that federal Liberals “will no longer get our support,” at which the crowd began chanting, “No more Liberals! No more Liberals!”

“I have never in my life been an activist,” said John Himanen, a father of three elementary-school aged children in York Region District School Board, “but I am now because of my children.” Himanen stressed that parents will not be able to opt out as Wynne has promised they will, because to do so will be seen as contrary to the Human Rights Code.

CFA will keep fighting, Khalid Mahmood of the Thorncliffe Parents Association, told the crowd. “We made history that we have submitted an 185,000” signature petition, he said. During the school boycott May 1 to 5, Thorncliffe’s schools reported a 90 percent absentee rate.

Wynne “must be scared,” he said. She must be having “nightmares” and “can see her failure” in the amount of protesters who showed up June 7.

Progressive Conservative MPP Monte McNaughton (Lambton-Kent-Middlesex) spoke at the rally and brought greetings from “the new PC Party leader and my friend” Patrick Brown. McNaughton, the only MPP so far to speak out against the sex-ed curriculum in the legislature, said “it’s not the government’s job” to tell parents how to raise their kids and that “six years of age is too young” to introduce sex education.

Meanwhile, another MPP showed up at the protest. Holding a rainbow-colored flag with an unidentified supporter, NDP Cheri DiNovo of Parkdale-High Park said she was there to show support for LGBTQ children, and that there are “six-year-old gays, lesbians and trans” children.