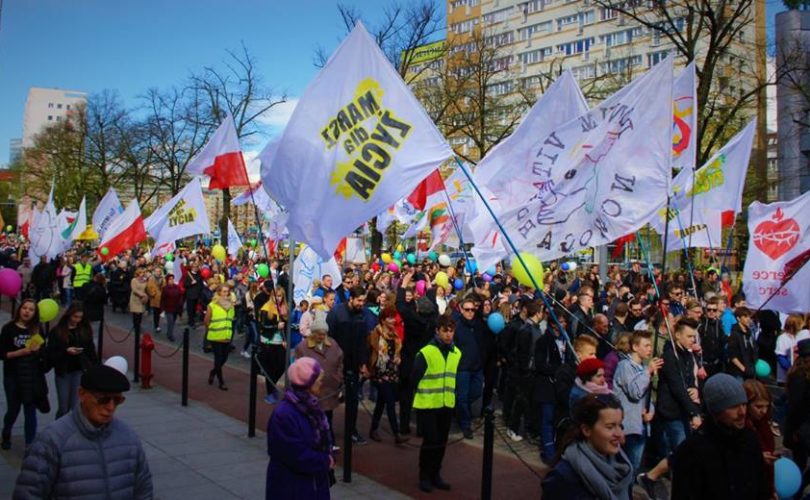 WARSAW, Poland, April 27, 2016 (LifeSiteNews) – Sunday was a warm day for life in Poland. Two big marches took place in Warsaw and the northwestern city of Szczecin. The flag and balloon-filled marches included masses, music, and the gathering of diapers for the babies.

The 11th March for the Sanctity of Life, which took place in Poland’s capital, had as its slogan, “The merciful are always faithful to life.”

Thousands marched “in solidarity with the weak, the innocent, the helpless and the endangered,” as Archbishop Henryk Hoser said.

His diocese of Warszawa-Praga was one of the organizers of the event. The archbishop, a trained physician who served 18 years as a Pallotine missionary in Rwanda, is an outspoken defender of life. Another organizer was the Warsaw archdiocese, whose Cardinal Kazimierz Nycz said that “every person’s life—a scientist’s, a genius’, a simple man’s, or a handicapped or sick person’s—is sacred.”

Archbishop Hoser explained that “the march is a testimony to faithfulness to life. It is also an act of bravery since there is no faithfulness without sacrifice, and no solidarity without effort.” He mentioned the cost of faithfulness and solidarity, citing the example of Professor Chazan. Chazan lost his job after refusing to refer a woman for an abortion.

“Every one of us can be subject to mockery, ridicule, controversy or any other consequences,” added the archbishop. “But we cannot betray a person, because whatever you did for one of the least of these brothers and sisters of mine, you did for me, Jesus Christ says. The giver of Life is also a judge of our life, the merciful Master whom we have to trust.”

The archbishop expressed regret that unborn babies are still not protected absolutely and unconditionally by Polish law, a hint to the politicians who will soon vote on such protection. Professor Chazan, who was present at the march, echoed support for the ban and discussed the moral responsibility of politicians.

“A member of parliament who votes for abortion commits a sin similar to a mother who kills her unborn baby,” Professor Chazan said. “Everybody has a conscience …and it cannot be left behind before entering a hospital or Congress.”

He also said that the number of legal abortions in Poland is growing, and blamed it on the decision of Warsaw Mayor Hanna Gronkiewicz-Waltz, who sacked him from his position of hospital director two years ago. Chazan explained that many doctors and hospital directors know his story and do not want to risk their jobs. They behave “more rationally” in their abortion approach. This behavior seems to be quite prevalent among doctors in Warsaw, according to Chazan.

The biggest march in Poland, and one of the largest in Europe, took place not in Warsaw, but in Szczecin, Poland’s seventh-largest city. The Baltic seaport has a longer tradition of organizing pro-life marches than the capital. This was the 14th march compared to the 11th in Warsaw.

Watch a video report from the March for Life in Szczecin (in Polish):

According to police estimates, 12,000 participants walked from the Saint John Paul II statue to Szczecin’s cathedral. The march was organized by the Catholic organization Civitas Christiana and the pro-life Foundation of Little Feet (Fundacja Małych Stópek) headed by the priest Tomasz Kancelarczyk. His group educates on pro-life issues and gathers clothing for needy families and diapers for babies saved from abortion.

The march’s slogan, “Men with Valiant Hearts,” served as a reminder of men’s role and responsibility for another person. The organizers supplied men with small shields bearing the international symbol of pro-lifers, a picture of the feet of a 10-week unborn baby.

“We are calling all valiant men, fathers, brothers, priests to witness the value of life, born and unborn,” said Rev. Kancelarczyk. “The world needs their courage and responsibility.”

Anna Suchy, the spokesperson for the Foundation of Little Feet, told LifeSiteNews that the stories of different valiant Poles were told during the march. One of them was Witold Pilecki, a soldier and one of the founders of the Secret Polish Army. He volunteered to be imprisoned in Auschwitz to gather information about the atrocities and to organize resistance there. Another valiant man was Saint Maximilian Kolbe, who in the same camp also volunteered to die in place of another prisoner.

As the local newspaper Kurier Szczeciński reported, the participants shouted, “We are the army which defends life.”

One of the participants told Catholic Press Agency (KAI) that a woman’s social environment—husband, friends and family—are key to avoiding abortion. Other participants emphasized that although they are against abortion, they came here not in protest against something, but rather in support of life.

The march ended with mass at the cathedral, where Archbishop Andrzej Dzięga supported the abortion ban and encouraged the spiritual adoption of the unborn. “There is no conflict between the protection of a baby and the parents,” the archbishop said during his homily. “There is no competition there. There is only community of life, heart and love.”  He also talked about lawyers who develop more and more refined human rights protections, but are unable to “protect everybody in every nation, and in the human family.” He called it “a legal scandal.”

More pro-life marches in Poland are scheduled in May and June.