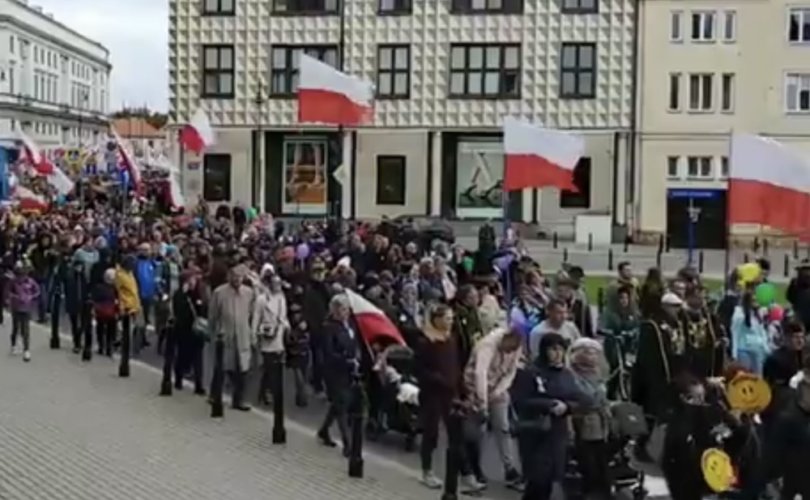 (LifeSiteNews) – Thousands of pro-lifers took to the streets this past weekend in Europe, as Germany, Switzerland, and Poland saw their annual March for Life events take place, despite stern opposition.

German March for Life attended by clerics, disrupted by pro-aborts

Around 4,500 pro-lifers gathered in Berlin, Germany on Saturday, September 18, according to umbrella organizing group Bundesverband Lebensrecht, which is comprised of 15 pro-life groups. The 17th such annual event saw pro-lifers gather in the capital’s center, by the Brandenburg Door.

Attendees at the march heard addresses by Catholic and Orthodox clerics, with the Catholic bishop of Eichstätt, Gregor Maria Hanke, sending a greeting thanking pro-lifers for their “commitment to human life in the womb and for your courage to support it.”

The march drew to a close with an ecumenical prayer service led by the Catholic Bishop of Görlitz, Wolfgang Ipolt, and the Berlin Serbian Orthodox priest Veljko Gacic.

Reports suggested that up to 1,000 police officers were in attendance, as Berlin’s March for Life has become a scene marked by strong pro-abortion counter protests. This year was no exception, with some hundreds of pro-abortion and pro-LGBT supporters holding their own march.

Footage of the counter-protest reveals many pro-abortion supporters holding signs in English, while a woman dressed as a bishop led the crowd in loud, disruptive music.

The size of the event was up from last year, which saw 3,000 pro-lifers gather in an event restricted due to COVID-19, and which also had to contend with threats of disruption from angry abortion supporters. However, neither of the two most recent events compared to Berlin’s 2019 March for Life, which saw 8,000 pro-lifers descend on the nation’s capital in defense of the unborn.

Switzerland also had to contend with significant opposition from pro-abortion supporters, as some 1,400 pro-lifers marched in Zurich for the country’s eleventh March for Life.

The march itself was delayed in starting due to barricades set up by the abortion supporters. The night before the march, vandals also targeted premises of three of the pro-life groups responsible for the march.

Offices of the Swiss Evangelical Alliance (SEA), the association Pro life Agentur, and the Zukunft CH Foundation, were covered with graffiti of pro-abortion messages and slogans. “Pro life is a lie!!” read one of the messages painted on Pro life Agentur’s window.

In a joint statement, the pro-life groups condemned the attack, saying that “the fact that the event could only be held under police protection again this year” shows that “freedom of expression is not uncontested in Switzerland.”

However, such scenes are not without precedent, and have even become commonplace in recent years. In 2020, Switzerland’s March for Life had to be canceled due to security concerns, after an estimate 400 to 1,000 pro-aborts were expected to attempt to block access to the event. Local police had warned organizers two months prior to the event about a violent mobilization being planned against the pro-life demonstration.

Indeed, counter demonstrators lit barrels on fire during the 2019 March for Life in Zurich, and following the release of the March for Life announcement in July 2020, a partner organization found an animal carcass and maggots in its mailbox.

Scenes in Poland were much less confrontational as pro-lifers amassed in Warsaw for the annual event, instead of the over 100 cities across the country as is normal outside of the COVID era.

The march, which took the theme of “fatherhood,” was somewhat scaled down due to restrictions, but still saw 5,000 people attend, according to organizers.

“We want to send a signal not only to the whole of Poland, but also to the whole world that there are men in Poland who take responsibility, that they do not run away from it,” declared one of the march’s organizers, Pawel Ozdoba.

March for Life and Family

In a notable difference from similar marches, Poland’s march was dedicated not just to “life” but also to the “family.”

Attendees were also joined by Poland’s President Andrzej Duda for the second time, in what was the seventeenth annual pro-life march in the country.

The march is the first since Poland’s ban on eugenic abortions October 22, 2020 last year. The Polish Constitutional Tribunal issued a ruling that then-current provisions allowing “abortion in the case of a high probability of severe and irreversible impairment of the fetus or an incurable disease that threatens the fetus” are inconsistent with the Polish Constitution.

As such, abortion for eugenic reasons was made illegal, and promptly led to mass protests from abortion activists and political bodies.