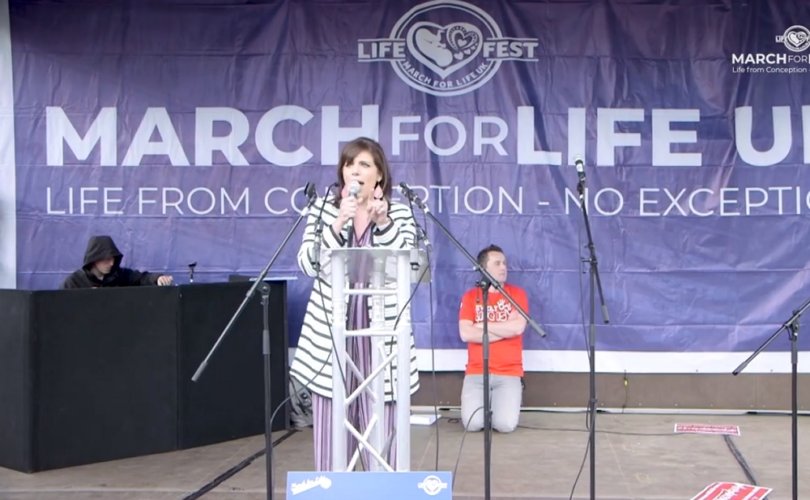 May 13, 2019 (Society for the Protection of Unborn Children) — As many as 5000 pro-lifers braved the unpredictable weather on Saturday to march on Parliament for the 2019 March for Life UK.

“This Parliament Has Got It Wrong”

Obianuju Ekeocha of Culture of Life Africa, who kicked off the speeches at the end of the March, said that holding the event in Parliament Square was particularly powerful because “right here, at this Parliament, things have gone wrong in the past. The Parliament got it wrong more than 200 years ago when they decided that the black person should not be protected by law.” Now as then, this Parliament has it wrong, she said, and like the abolitionists of slavery, we need to raise our voices. “Who is worthy of personhood?” she asked. “The babies in the womb are worthy of personhood! They deserve to be protected from womb to tomb.”

“I Survived An Abortion”

The crowds of pro-lifers (and the much smaller band of pro-abortion activists who tried to drown her out) also heard the testimony of Melissa Ohden, who survived a saline abortion 41 years ago.

“In my work as the founder of The Abortion Survivors Network, I have had contact with 286  other abortion survivors, including five from the U.K., four of whom are still alive today,” she said.

“Despite the miracle of my survival, the doctor's prognosis for my life was initially very poor. My adoptive parents were told that I would suffer from multiple disabilities throughout my life. However, here I am today, perfectly healthy. Whether I had lived with the expected disabilities or not, my life still deserved to be protected and respected, I still was worthy of the love that my family freely offered.”

Perhaps the most moving testimony was from Carla and Danny, who recently changed their minds about having an abortion outside a Marie Stopes clinic in Birmingham. They thanked the 40 Days for Life volunteer whoM they credited with saving the life of their baby daughter, and promised to come back with her next year.

All Lives Are Irreplaceable

The theme of this year's March, which returned to London for the second year after moving from Birmingham, was “Irreplaceable”. Co-director Isabel Vaughan-Spruce, said the theme was a reminder “that each human being from the moment of his or her conception is a unique individual that cannot be replaced by any other human being”.

This theme was also highlighted at LifeFest, a morning of talks, workshops and exhibitions before the March. Keynote speakers included Melissa Ohden, and Jeff and Jennifer Christie, who told their powerful story of choosing life after Jennifer was brutally raped. Jennifer said that many people in her country, the US, support “exceptions” in abortion law for rape and incest. “That shouldn't be good enough for us, because lives like his matter. They all matter. Lives like his are just as irreplaceable as all the unborn.”

Antonia Tully outlined SPUC's work in lobbying and campaigning, but told the people gathered in Emmanuel House  that “we will not change the law in Westminster until we change hearts and minds up and down the country.” However, she said, “what we have that the other side don't, is people. Ordinary people up and down the country who are ready to stand up for life. People like you.”