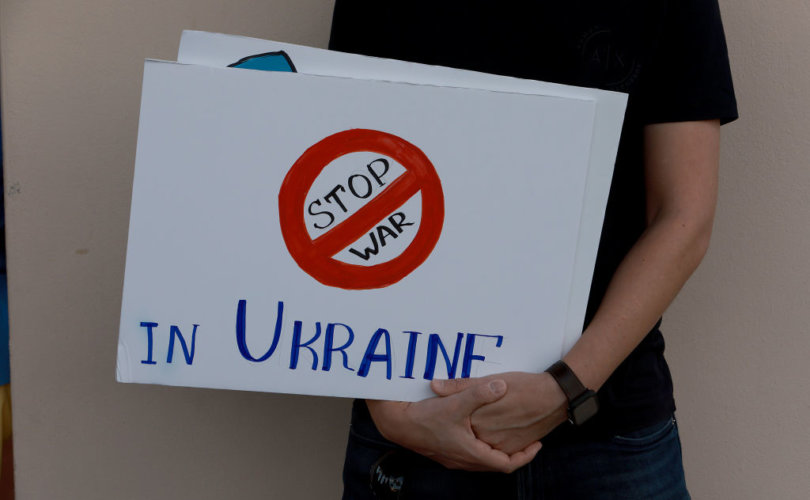 MOSCOW (LifeSiteNews) — Thousands of anti-war protesters, including children, have been arrested across Russia since President Vladimir Putin’s invasion of Ukraine.

On March 1, Russian politician Ilya Yashin published on Twitter photographs of children with anti-war signs sitting forlornly in a police van and, apparently, in a police station.

“Nothing out of the ordinary: just kids in police vans behind an anti-war poster,” Yashin, 38, tweeted in Russian. “This is Putin’s Russia, folks. You live here.”

But a Russian anti-Putin activist well known to LifeSiteNews says that being arrested at an anti-war protest in Moscow really is nothing out of the ordinary.

“It is usual in Russia,” said Igor, who agreed to this interview if his real name did not appear. “You protest, you get grabbed by police.”

Igor said that there have been restrictions on protesting in Russia for almost Vladimir Putin’s entire time in office, since the 2000s.

“There was never a ‘freedom to protest’,” he said. “Any protest event is to be ‘agreed upon’ with the authorities. Otherwise, you go to jail.”

Igor himself was arrested in Moscow in 2012 as a student in his 20s; he was protesting what thousands of Russians believed to be a stolen election.

Igor said he was part of a crowd of “maybe 100,000 people” and that they were bottlenecked by police.

“Someone started pushing forward and attacking the police,” he recalled. “Paid provocateurs, I guess. The police started attacking us indiscriminately. We resisted by not allowing ourselves to be pushed to the ground.”

Two officers pulled Igor out of the crowd by his arms.

“I fell down, and then they started carrying me. Then they threw me to the ground and told me to stand up. I didn’t want to. They started to carry me again and threw me into the police bus.”

There he was met by cheering, defiant protesters.

“Some were wounded,” Igor recalled. “One guy had a concussion; they had hit him on the head with a baton.”

There were about 700 arrests in Moscow that day, he said, and therefore the police were unable to process them fast enough. Igor and the other protesters with him were released, and he considers himself lucky not to have spent a few days in prison. After this protest, he said, protesters have been liable to “huge fines” and up to 30 days in prison.

Since the arrests of Russian anti-war protesters this week, freedom of speech has also come under fire.

“Today the Russian Duma has voted in a new law,” Igor said. “Up to 15 years in prison for ‘fake news about the Russian army.’ From now on any [anti-war] protester can theoretically be prosecuted for that. It’s monstrous, especially seeing the suffering of those young soldiers in a war for nothing.”

Igor is angered at the idea that some Westerners might think Putin has anything to do with freedom.

“Now that Putin — not satisfied with [harming] Russian people — has waged war on a neighboring country, supporting Putin means supporting aggression and willing the self-destruction of the West,” he stated.

“Putin hates the West, envying it. He will not stop destroying and weakening the civilized world until everyone stands up to him in strength.”