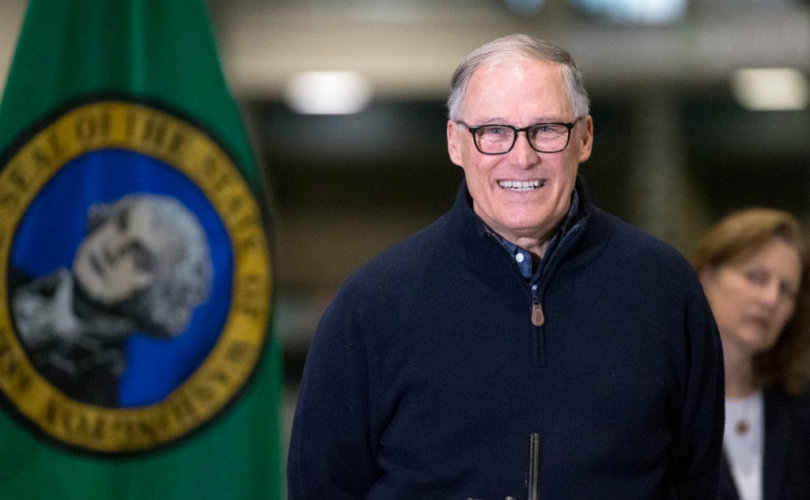 SEATTLE, WA - MARCH 28: Washington State Governor Jay Inslee and other leaders speak to the press on March 28, 2020 in Seattle, Washington. The governor discussed deployment of a new field hospital at CenturyLink Field Event Center which is expected to create at least 150 hospital beds for non-COVID-19 cases and will include 300 soldiers from the 627th Army Hospital at Fort Carson, Colorado. (Photo by Karen Ducey/Getty Images)Photo by Karen Ducey/Getty Images

(LifeSiteNews) — As COVID-19 vaccine mandate deadlines approach for millions of Americans, a Thursday report by The Hill found that 1,887 Washington state employees and healthcare workers have thus far been forced out of their jobs for standing up to Democrat Gov. Jay Inslee’s strict COVID-19 jab mandate.

News of the mass exodus comes as Washington, like most U.S. states, is caught in the grip of a grueling post-pandemic labor shortage.

Representing 3 percent of the state’s total workforce, the 1,887 workers now out of a job either opted to quit or were fired for refusing the jab in violation of the statewide requirement.

The mandate, announced by Inslee in August with an October 18 deadline, has drawn criticism for failing to permit unvaccinated workers from electing to take part in weekly testing as an alternative to getting the abortion-tainted injection.

Employees may request a medical or religious exemption, but it is unclear how many such exemptions have been or will be approved.

According to the Hill, “[t]hose who did not have a valid exemption would face ‘nondisciplinary dismissal.’”

Washington’s Office of Financial Management said in a statement that over 63,000 employees, or roughly 92 percent of the total state workforce, are “in compliance” with the governor’s strict mandate as of Tuesday, one day after the mandate deadline.

The Hill reported that some 3 percent of the state’s employees have been granted an accommodation thus far and are therefore in compliance with Inslee’s dictate, while 4.6 percent “are either in the process of being vaccinated, pending retirement or are pending an accommodation or separation.”

Among the more vocal opponents of the state’s jab mandate have been members of the Seattle Police Department, a beleaguered police force already hit with “defund the police” budget cuts and a staggering resignation rate in the wake of the George Floyd riots of 2020.

Images circulating widely on social media depict Seattle police officers hanging Gadsden (“Don’t Tread On Me”) flags from their squad cars to protest the coercive vaccine mandate. One Washington State trooper’s final radio sign-off saying he was being pushed out of his job because he refused to get the shot has gone viral.

🇺🇲 Some Seattle Police Officer’s cars are flying “Don’t tread on me” flags to symbolize they are against the vaccine mandate. pic.twitter.com/5PsRq1i3JO

Seattle Police Officers Guild’s President Mike Solan said that well before the October 18 COVID jab deadline, the Seattle Police Department had already lost more than 300 officers during the past 18 months.

“This is strictly about standing up to save jobs. We’ve lost so many people because of the political betrayal from our elected officials in this city.” pic.twitter.com/VGXiGiLr1B

Solan said in the face of the vaccine mandate, he anticipates another “mass exodus” from the department.

At the time of the interview, conducted October 12, some 200 Seattle police officers had not yet submitted their proof of COVID-19 inoculation.

“Even, let’s just say we lose 50 cops — even if we just lose one — it’s devastating to how many losses we’ve already incurred,” Solan said. “I’m just fearful that this is another blow where we just lose quality people to do the job of policing.”

“I’m not sure how we answer those 911 calls,” he remarked. “This isn’t alarmist, but this is reality here. And many of the people that I represent are just fed up, and this is the last straw with them as they feel that they’ve been targeted for just being cops here in the city, as they think that this mandate has been politicized. And there’s not much more trust in our elected officials anymore.”

Solan said that some 85% of the Seattle Police Department’s cops have already submitted their proof of COVID-19 vaccination, but he said vaccinated officers may choose to walk off their job if their unvaccinated partners and colleagues are forced to turn in their badges.

“The brotherhood, the sisterhood is still here and some people are willing to walk away from the job just to show solidarity to the fellow brothers and sisters because they’re so tired of the division and the all out assault against police,” Solan said.

Meanwhile, there is evidence the officers are not willing to walk away or be fired without putting up a fight.

According to a report by Fox News, “some 200 Seattle police officers who have declined to get vaccinated for COVID-19 by Monday’s deadline will likely bring litigation against the city to prevent their mass termination.”

Inslee’s press secretary Mike Faulk failed to address concerns about gaps in policing or other essential services which may result from the firings of unvaccinated employees.

Faulk told The Hill in a statement that it’s “good news” that the majority of state employees have gotten the experimental shots, adding he’s “sorry to see that 3 percent go.”

“While we are sorry to see that 3 percent go and we wish them well, we are pleased that it is not higher. Some have the option to return if they are fully vaccinated within the next month,” Faulk said.