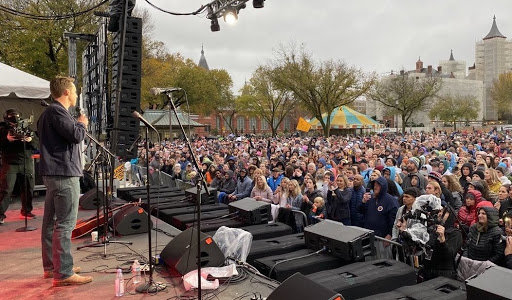 WASHINGTON, D.C., October 26, 2020 (LifeSiteNews) – Tens of thousands of mostly young Christians gathered at the National Mall on Sunday to proclaim “Let Us Worship,” amid the draconian restrictions still being enforced in many jurisdictions across the land against church assemblies.

They came from all across the country to pray for the nation at a critical moment in history, when a pro-life judge’s place on the U.S. Supreme Court was about to be confirmed, and as the presidency of the most pro-life chief executive in the history of the United States, Donald J. Trump, hangs in the balance as voters go to the polls.

Sean Feucht, a missionary, artist, speaker, author, activist, and founder of “Let Us Worship,” had already led other large worship rallies across America in recent months, but yesterday’s event in Washington, D.C. was the biggest, bringing an estimated 30,000 believers together to join their voices in prayer.

“We lit up the sky tonight in D.C. for King of Kings and the Lord of all Lords!” proclaimed Feucht after the rally lasted well into the night.

“I’m forever changed. I hope you are too,” he added.

Thank you to all who came and joined online. We lit up the sky tonight in DC for King of Kings and the Lord of all Lords!

“Super excited to be a part of something like this with my kids at our nation’s capital,” tweeted one attendee from Gettysburg, Pennsylvania, who posted a video of the vibrant worship.

“What an awesome experience,” he declared.

Super excited to be a part of something like this with my kids at our nations capital. What an awesome experience.#LetUsWorship #OneNationUnderGod pic.twitter.com/PAL4z9Ovqu

Senator Josh Hawley: ‘An historic moment in the life of our nation’

“It strikes me that 2020 has been a year of a lot of news, hasn’t it? But we’ve got the best news of all, because Jesus Christ is risen from the dead!” declared U.S. Sen.r Josh Hawley, R-Missouri, holding his Bible high.

“He came to give us a future and a hope, and now our nation needs to hear about that hope,” said Hawley. “Now more than ever, America needs to hear our voice. It needs to hear the hope that we have in Jesus.”

When Hawley mentioned the upcoming Senate confirmation vote on Amy Coney Barrett’s appointment to the Supreme Court, the crowd erupted in cheers.

“She’s not afraid to say that abortion is wrong and thet every child has the right to life.” said Hawley. “That is why tomorrow night it’s going to be my privilege to cast my vote for Amy Coney Barrett.”

“This is an historic moment in the life of our nation,” he declared, as he asked the crowd to pray for her and all political leaders. “Lord, would you pour out your Spirit on this country afresh.”

Life and freedom of religion at stake

Most who came to D.C. to participate in Let Us Worship seemed to share Hawley’s view that this is a critical moment in the nation’s history, with the lives of the unborn and religious liberty clearly at stake on Election Day.

“I’m here to worship God, to pray for this country and our President,” Isabelle, a young Catholic from Alexandria, Virginia told LifeSiteNews. “We need Donald J. Trump to win four more years.”

“We are going to worship no matter what. They can’t stop us,” said a woman from Baltimore who explained that she came to D.C. because she and other members of her church want freedom to worship. “We are created to do that, and not to do it behind closed doors or with a mask, but openly.”

“I’ve been watching the things that Sean (Feucht) has been doing across the country and he has been so inspiring, so encouraging,” said Corey Shoff of Charlotte, North Carolina.

“We can see the enemy is trying to scare,” using tactics of fear, noted Shoff. “But we know that the Lord is moving, He has a plan, He has a destiny for America. We just want to be a part of history.”

Kelly Sieben said he traveled from Seattle, Washington to “make a statement: We are free to worship, we’re here to represent Christ, and we have those rights and freedoms in this country.”

“We believe that the Bride of Christ needs to get out and worship,” Andrew Segura of Fresno, California told LifeSiteNews.

“The key to our warfare is still worship,” said Segura, and no matter what goes on in Washington, “Jesus is moving His people to the front line, and if we can just hold that with Jesus at the front line, we’re going to see a revival in America.”

“This is a critical moment” in our nation’s history, said Jeffrey Mccall of Georgia, who formerly lived as a transgender female and is now leader of the ex-LGBT Freedom March. “Evil and good are clashing publicly.”

“People that are leaving the LGBTQ lifestyles are having radical encounters with Jesus,” said Mccall. “We know that a huge part of this end time revival is the Lord is waking people up.”

“It’s time to get out of the four walls of our churches,” said Luis Ruiz, a survivor of Orlando’s 2016 Pulse nightclub massacre where 49 gay men were killed. “We want to come out and worship and come together as the Body of Christ.”

After you have signed the petition, please take a few minutes to politely call the USCCB's Respect Life Office and ask the bishops to issue a united statement in defense of Amy Coney Barrett's Catholic faith and her pro-life beliefs. Their phone number is: 202-541-3070. Or, write them an email at: [email protected]

“There’s an LGBT revival,” said Ruiz. “People are coming to Jesus –– transgender, lesbians, bisexuals, homosexuals –– they are no longer identifying as LGBTQ, and they want to identify as children of God.”

“Even though all this craziness is happening, I see unity happening,” added Angel Colon, also a Pulse nightclub survivor. “Unity in the Body of Christ is what has to happen for the Lord to move.”

Kevin Whitt, until six years ago, had lived his entire adult life as a transesxual woman but has now reclaimed his identity as a man, redeemed by Jesus Christ.

As a result of the Let Us Worship gathering, Whitt said at the top of his list is for abortion to be abolished, “and that pediatric gender transition, which is so normalized now … will be criminalized.”

“This is a bold move to come … and declare Jesus,” said Edward Byrd, who with his beautiful singing voice led an amazing worship session in the U.S. Capitol rotunda last year, where ex-LGBTQ men and women repented for the sins of homosexuality and transgenderism on behalf of the whole nation.

“Anytime you declare Jesus, there will be breakthroughs,” said Byrd. “I think that faithfulness of our group –– the ex-LGBTQ community –– coming out and talking about their testimony is causing breakthrough and a shift in the land.”

After the event, as the invigorated attendees flocked to the DC Metro to return home, the worship continued with the hymn, “Our God is an Awesome God” gloriously resounding through the Smithsonian Metro station.

@grace.torgerson captures this magic moment in DC subway after #LetUsWorship Thousands flooded DC to stand joyfully for their God given right to worship! Jesus People tracing the steps of evil city riots, to spread love, joy, hope, and salvation!