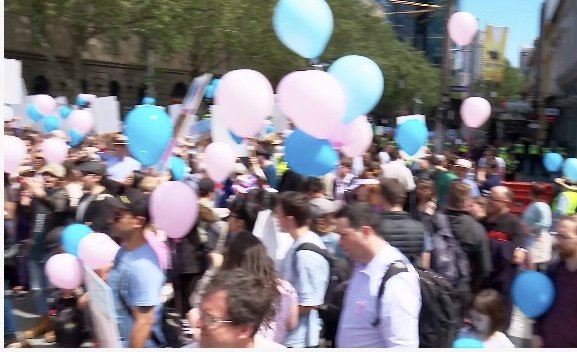 October 14, 2019 (LifeSiteNews) — Thousands marched again in Victoria against what organizers call the most extreme abortion laws in the world. This year marked the 10th anniversary of the decriminalization of abortion in Victoria, which passed in October 2008, and the 10th annual March for the Babies.

A small but vocal group of seasoned protesters, led by Fiona Patten’s Reason Party, formerly the Sex Party, were contained by Victoria’s finest, who once again prevented a repeat of the chaos in 2013.

Fresh from the recent loss in New South Wales to an abortion decriminalization push, Nathaniel Smith told the crowd the inside story about himself and fellow Members of Parliament.

“Unfortunately, what happened here in 2008 has now happened in New South Wales. It is disgraceful,” he said. “When I was in March, this is the first conscience vote we had and we were (not) warned about it. We were sent an email at a quarter to midnight on a Saturday night and now we're going to introduce the bill on that Tuesday.

“There was no consultation whatsoever and the reason I did it is because they knew they had the numbers in the upper house. They wanted the ram this thing through the lower house, like a dodgy D.A. (development application) at a (local) council meeting. It was absolutely dreadful.”

Life Choice Australia’s Rebecca Gosper encouraged attendees after sharing with them her own horror story from the NSW abortion decriminalization campaign. She implored them that it was definitely worth standing for life no matter the cost.

“If you stand up boldly for life, you may get targeted by bullies,” Gosper told them. “You may lose a high court case that you fought on behalf of so many, like Kathy Club. You may be booted out of a public venue like pro-lifers we're in North Road RSL just a couple of weeks ago. You may have your ads unfairly taken down from buses and billboards like Emily's Voice. I can't guarantee that it won't happen to you, but I can guarantee that it is worth it.”

Incoming Secretary for the March for the Babies committee, Moira Deeming, related her own story of abortion regret from helping a friend with the best of intentions.

“When I was 16, believe it or not, I would have been over there with those (pro-abortion protesters),” Deeming said. “When I was 16, my best friend got pregnant and I helped her to get an abortion because I thought to be a good friend was to do exactly what they said they wanted. And that abortion destroyed my best friend and she couldn't even look at me afterwards because I reminded her of the most painful thing that had ever happened to her.

“Abortion is a lie. You are not loving women by getting them abortions.”

Victorian pro-life political spearhead Bernie Finn implored the crowd to be active in achieving change.  “It is up to each and every one of us to take personal responsibility to fight this evil; and as I said earlier, to win,” he said.

The rally finished with Finn leading a rousing three cheers for the Victoria Police and thanking them for the job they do.