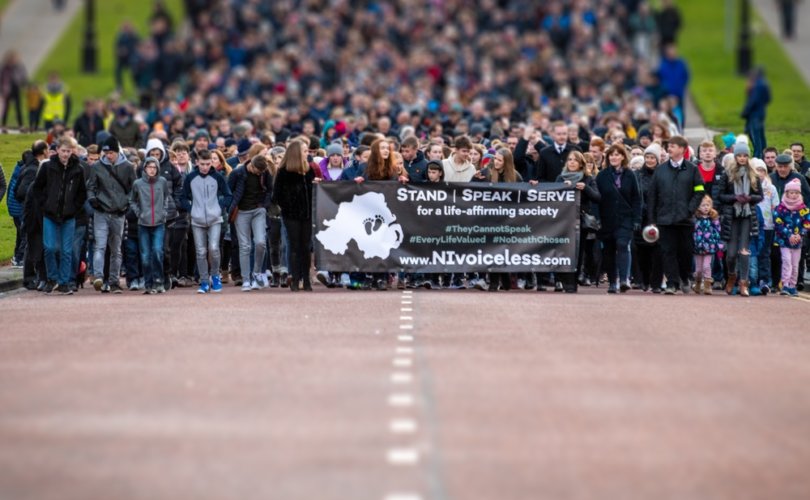 BELFAST, Northern Ireland, December 2, 2019 (LifeSiteNews) – Thousands gathered outside the parliament buildings in Belfast, Northern Ireland on Saturday in protest against the region’s new abortion laws, which came into force in October.

Since 1967, Northern Ireland has been the only part of the United Kingdom where abortion has remained presumptively unlawful. While abortion claims over 500 lives daily in the rest of the UK, opposition from the people of Northern Ireland has, until now, prevented all attempts to liberalize the Province’s pro-life laws.

Northern Ireland rejected the 1967 UK Abortion Act and since then, unborn children in the region have been continued to be protected by 1861 Offences Against the Person Act. But the new law repeals the sections of the 1861 Act which defend unborn children. Pro-life leaders have described the current situation as a state of “legal chaos.”

The event was a continuation of recent pro-life demonstrations. 20,000 people protested in September prior to the laws coming into force. On Saturday, thousands of people processed together to the top of the parade immediately outside the parliament buildings and placed stones with pro-life messages on the ground. The group then stood in silence for six minutes, holding lights in the air in an expression of solidarity with unborn children.

The event was organized by NI Voiceless, and was supported by a number of other pro-life groups including the Society for the Protection of Unborn Children (SPUC) and Precious Life.

Sarah Crutchley, spokesperson for NI Voiceless, said in an interview with LifeSiteNews:

“We’re here today to express our sorrow. We want to create a space for the general public where they can peacefully and publicly express their sorrow at this change. We feel this is a really devastating time for Northern Ireland where the right to life of unborn babies is being completely disregarded. We also want to come together in unity for people of all religions and none, with people of all political backgrounds here and all ethnic backgrounds as well – where we can come together and shine a light for the value of every human life. And that’s what today is about. We want a life-affirming society where every life is valued and no human death is chosen. And so today we’re here to stand, speak, and to serve for life.”

“I came here today because it’s just so important. You know the law might be changing but we need to continue to stand up for life. Because the lie that abortion is somehow healthcare, that it empowers women, is just outrageous. I just believe in life. It can be so easy just to get on with things, that the law has changed and to accept that, but we can never accept this lie.”

Another participant at the event told LifeSiteNews:

“I’m here because in 1972 my mother was told that she and I couldn’t survive. She was told the same again four years later – we all lived to tell the tale. Doctors make mistakes and whether or not doctors make mistakes nobody has the right to ever take life under any circumstances. This [event] is an act of mercy and we should show mercy and show compassion to these women and offer them alternatives because there is always a better option than abortion.”

Liam Gibson, political officer for the Society for the Protection of Unborn Children (SPUC) in Northern Ireland, attended the event and told LifeSiteNews:

“Our immediate concern is the consultation taking place and closing on 16 December. We have drafted some advice for people to take part in that consultation, regardless of the fact that the consultation is very much a controlled show – it’s really just for window dressing. It asks people to make a choice between abortion on demand up to 12 [weeks] or abortion on demand up to 14 weeks, whether a request for abortion is going to be rubber-stamped by one healthcare professional or by two. But we believe that a strong, robust, and emphatic response from the public will help to reverse what has happened in Northern Ireland.”

Dr. Paul Coulter, one of the event organizers, addressed the participants at the conclusion of the witness. He urged them to continue to stand up in defense of unborn children, to elect pro-life candidates in the upcoming general election, and to support pro-life groups in their efforts to stop abortion.