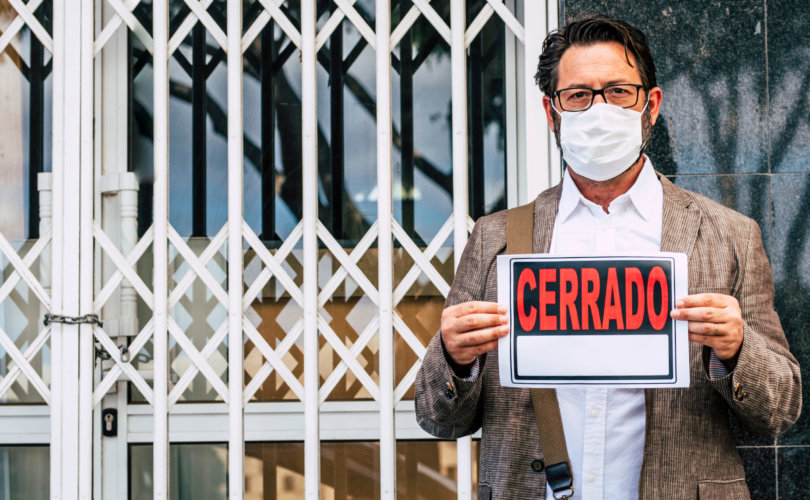 January 26, 2021 (LifeSiteNews) – Small-business owners and everyday citizens have been demonstrating across Europe in retaliation to strict lockdown measures being reimposed throughout the continent, with many reopening their businesses.

In Madrid, a large group marched through the city, protesting Spain’s “health dictatorship” with cries of “liberty, liberty.” Speakers addressed the gathering crowd with messages warning that “there was a plan being forged against the fundamental rights, against liberty, and against life itself.”

Mentioning Event 201, the 2019 pandemic exercise hosted by the Johns Hopkins Center for Health Security, the World Economic Forum, and the Bill and Melinda Gates Foundation, the speaker announced that “this plan that they concocted is being executed with the complicity of the main governments around the world.”

“The measures adopted by the government are disproportionate and dangerous for health, and the economy of this country, and are ruining the lives of many families,” the speaker continued.

Among the gathered crowds were law enforcement officers who were also protesting. The speaker addressed the police officers, thanking them and asking that they remember they “took an oath to protect and to serve the citizenry. Please show this spirit now more than ever.”

Speaking more specifically to the economic troubles resulting from locking down the country, the speaker said, “There’s been a ferocious, unjustified, and unmeasured attack against tourism, the hotel industry and commerce in general, which is causing unemployment and ruin for hundreds of thousands of Spaniards.”

Adamant that the virus isn’t the only thing to fear, the speaker noted how “(t)hese (lockdown) measures have been extremely harmful to our society, causing economic ruin, suicides, mental illness.” Additionally, the restrictions have meant some are “ignoring treatment and forgoing treatment for many real pathologies, and in summary causing a greater morbidity than that which we are supposed to be addressing.”

Lamenting the effect this has wrought on the people of Spain, the speaker accused the state of abandoning its citizens and questioned the “justification for making healthy people wear masks.”

“Where is the pandemic that justifies that children must submit themselves to the tortures of being isolated from their fellow students, fellow children, and wearing masks?”

The speaker proffered an answer: “This is a distraction, it is an attack, a false flag with a supposed respiratory virus.”

“The indiscriminate requirement that we wear face masks outdoors … is an aggression against the dignity and the physical integrity of the people.”

The organizers of the event did acknowledge the harm that can be caused by the virus, expressing their “sorrow and solidarity” with all those who have died as a result of the virus as well as those who might be injured from the COVID-19 vaccines.

As the speakers concluded their statements, they made a final plea to the people for peaceful protests that effect change “in a democratic way.”

In direct conflict with coronavirus restrictions, restaurant and pub owners in the Czech Republic have reopened their doors to the public. After long months of forced closure, businesses have found themselves under increasing financial pressure to permit paying customers or face permanent closure.

Indoor dining and entertainment-focused venues (dubbed “non-essential”) have been restricted since October, with a brief window to trade over the Christmas period. Breaking the current restrictions can land business owners with fines up to 20,000 Czech Koruna (roughly $930).

Many disgruntled business owners, finding themselves at a loss with the rationale of restrictions and the effect they have wrought on their livelihoods, banded together to establish the Chcipl PES movement, a protest group against the restrictions in the Czech Republic. The group does not deny the risks associated with COVID-19, but equally does not see the lockdowns to be free from consequence.

Jiri Janecek, co-founder of the group who manages a brewery and a restaurant in Jince, Czech Republic, told AFP, “We (the group) have been disappointed with the government for a long time and we want to show that it had chosen the wrong way.”

Another member, Martin Macek, spoke to local press, explaining why he opposes the restrictions. “I joined the protest because I think the government order and what it has been doing to us for the last five months is wrong,” he said. “It can be seen that the number of diseases is still rising, while the restaurants have been more or less closed since October.”

While businesspeople in the Czech Republic have been rebelling against the restrictions, in the last few days protests in the Netherlands have broken out in response to the government introducing a 9 p.m. nationwide curfew.

According to Breitbart, violent skirmishes between police and citizens were taking place in major cities throughout the Netherlands, including Amsterdam and Eindhoven, leading to the arrest of around 240 people on Sunday night. Police were met with fireworks, homemade projectiles, and golf balls.

Speaking with Dutch newspapers about the violent activity, Prime Minister Mark Rutte said, “It is inadmissible. Any normal person can only find out about this with horror.” Scorning the demonstrators, Rutte remarked that the events were “criminal violence” that had “nothing to do with the fight for freedom.”

“You really have to wonder what were these people thinking?” he said, before adding that the “only fight we have to fight is to beat the virus.”

National Security Council chairman Hubert Bruls emphasized that cooperating with the curfew would be a way of regaining civil liberties in the future: “If we persevere now, we will get our freedoms back sooner.”

Eindhoven mayor John Jorritsma van Eindhoven was less optimistic, predicting that “if we (the Dutch) carry on like this, we will be heading toward civil war.”

Like the Czechs, British business owners are coming together to resolutely oppose the restrictions in an organized protest dubbed “the great reopening.”

The reopening date has been set for Saturday, January 30, when British small businesses are expected to dust off their registers and unlock their doors, despite restrictions remaining in place on most “non-essential” businesses such as the hospitality and entertainment sectors.

Satirizing the government’s “Stay Home, Protect the NHS, Save Lives” slogan, the “great reopening” group instead is saying: “Remain Outside, Protect the Economy, Save Lives.” In this way, the group state their argument that the lockdown measures actually run contrary to the government’s campaign to save lives, as well as decimating the livelihoods of those dependent on work from closed industries.

Far from being simply a catchy slogan, there is scientific grounds for this argument, inasmuch as a recent study from Stanford University confirmed that lockdowns have no “clear, significant benefits” in preventing the spread of COVID-19, and may in fact increase infection rates.

Some business owners have already experienced a brush with the law by remaining open throughout lockdown impositions. Hairdresser Sinead Quinn of Bradford, England, has already racked up £17,000 worth of fines for remaining open for business. According to the Lancashire Telegraph, the fines have not yet been paid.

Commenting on the “great reopening,” the salon that Quinn owns and runs released a statement, saying, “Yeah, we’re all opening regardless of lockdown. They can’t control us all when we stand up to them.”

In a post on the salon’s Instagram page, Quinn asked, “When is lockdown meant to end? Feb? In February you can bet your life savings that COVID-21 will be here and so will your lockdown.”

Encouraging other small businesses to get on board, Quinn advised the owners that they “can do it. They (the police) can’t stop us all can they?”

“Stand up for your freedoms. 30th January. Get up and open your businesses, go out and support those businesses. We are the power, not them.”