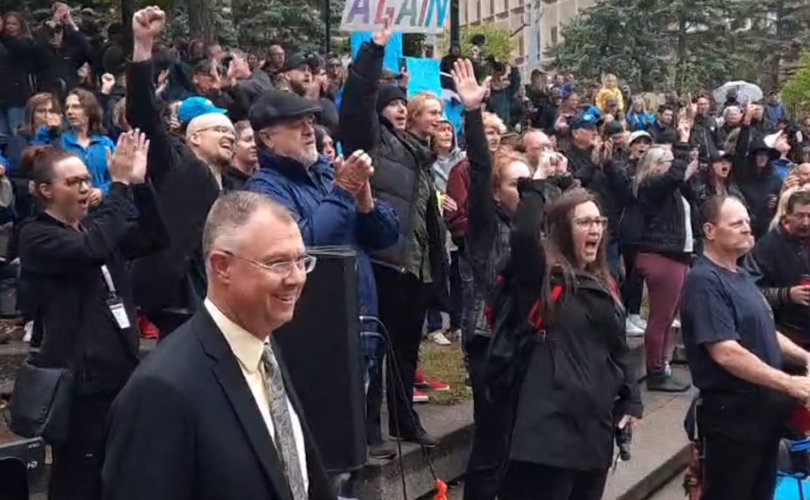 CALGARY, Alberta (LifeSiteNews) — Over 2,000 people in Calgary, Alberta, joined hands in protest on Saturday to show their solidarity with nurses, doctors, EMTs, firefighters and police who are opposed to COVID-19 vaccine mandates.

A “Calgary Frontline for Freedom Rally” was held outside Calgary’s City Hall in Olympic Plaza before the silent march, and featured speakers including Justice Centre for Constitutional Freedoms (JCCF) president John Carpay.

Carpay thanked the firefighters, nurses, EMTs, doctors, and police who are “standing up to this tyranny,” noting that this is the time to not “give in” to jab mandates.

“What we are witnessing today is the persecution of a minority, the unvaccinated, and this is the most vicious persecution in Canada in decades,” said Carpay. “Our right to bodily autonomy means the government has no business forcibly, or under pressure, or under duress injecting us with any substance without our full and informed consent.”

Carpay said the last time there was this type of “persecution” in Canada was when the Canadian government forcibly confined Japanese Canadians during the Second World War.

He said that “mandatory vaccinations and vaccine passports are a blatant violation of the Canadian Charter of Rights and Freedoms.”

“No longer it’s retired guys, it’s the active-duty policeman coming out and saying this is wrong. I’ve read the charter many times, and I have never seen anywhere in there where it says the government knows what’s best for my body.”

A nurse identified as Annette also spoke at the rally.

“I stand here today for all of your lines in the sand,” she said. “Everyone, including me, has everything to lose to be here today. Who are you going to believe, I ask you that. Be as wise as a serpent and innocent as a dove.”

Previously, the province’s health authority, Alberta Health Services (AHS), announced that all staff and contractors must be fully vaccinated by October 16.

The city of Calgary has mandated jabs for all city employees. The city of Edmonton is considering mandating COVID jabs, but has not done so at this time. Employees were asked to disclose jab status by September 10.

Calgary set a deadline of September 13 for all city employees to show proof of vaccination status or provide a reason for an exemption. Those who are unable to show an exemption must have their first jab by this date, or risk getting fired.

The city said those wishing to receive a valid exemption for medical or other reasons protected under the Alberta Human Rights Act will be accommodated. However, they must undergo rapid COVID-19 tests and show a negative result before being allowed to return to work.

At the rally, Carpay said the JCCF will be taking AHS to court over the mandates and promised to help those affected by them.

Saturday’s protest in Calgary was the second held by Calgary’s frontline workers in a week.

On September 7, about 100 Calgary first responders made up mainly of firefighters showed up, eliciting a scathing response from Calgary Fire Chief Steve Dongworth. He claimed the firefighters were a small group of people, “in the process of advancing their agenda.”

A senior Calgary firefighter who spoke with LifeSiteNews on the condition of anonymity blasted Dongworth, saying he “claims to not want discrimination in the workforce,” yet is in favor of jab mandates.

“This just shows he doesn’t care about his own firefighters,” he said. “All they care about, including the … administration who literally have no firefighting experience, are their own political aspirations.”

Alberta Premier Jason Kenney called the protestors at hospitals an “outrageous small minority” and threatened to bring the full extent of the law on them should they block roadways.

Similar first responder protests have been held in many cities across Canada, with a recent one in Toronto seeing more than 100 firefighters, paramedics, and police officers, join together to protest jab mandates.