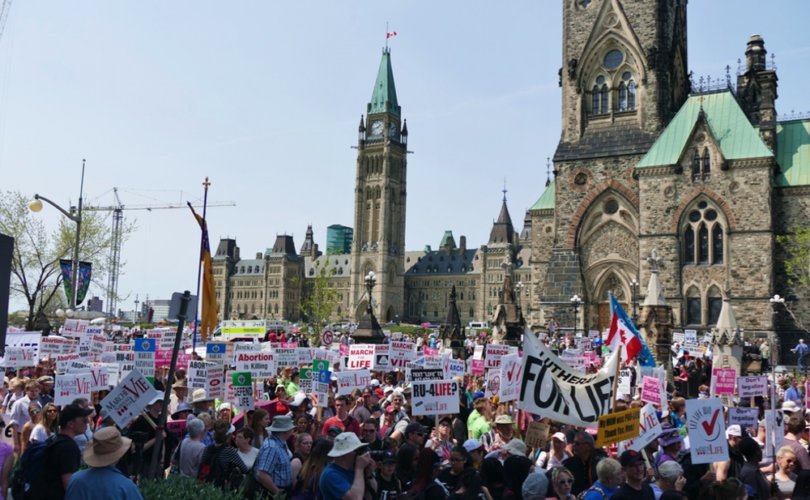 The National March for Life in Ottawa, 2016.Pete Baklinski / LifeSiteNews

OTTAWA, May 9, 2018 (LifeSiteNews) – Thousands of pro-life Canadians are gathering in Ottawa for the May 10 March for Life, the largest annual event in the nation’s capital. They will pray, march, and witness to their politicians and country that human life is sacred and must be protected from conception to natural death.

The theme of this year’s march is “Pro-life. All. In.”

The March for Life marks May 14, 1969, when Prime Minister Pierre Elliott Trudeau’s Liberal government passed the omnibus bill that legalized abortion and opened the door to abortion on demand.

Nineteen years later, the Supreme Court of Canada struck down the bill as unconstitutional, leaving Canada with no law on abortion.

Now, an estimated 100,000 children are killed in the womb every year in Canada. On top of this, six provinces — B.C., Alberta, New Brunswick, Nova Scotia, Quebec, and Ontario — now offer the federally approved abortion pill free of charge under provincial health insurance plans.

Trudeau’s son Justin has made access to abortion the “core mandate” of his Liberal government.

Indeed, the Liberals have controversially demanded employers attest their support for abortion to receive Canada Summer Jobs funding. They have denied funding to pro-life projects under Canada Service Corp. And they have pledged $650 million to promote abortion in developing countries.

As a result, the march’s organizer Campaign Life Coalition has this year altered the March for Life’s traditional route to bypass the Morgentaler abortion facility on Bank Street to comply with the law.

Alberta’s NDP government is in process of passing a similar law, while BC and Newfoundland already have “bubble zone” legislation in place.

All this makes it more crucial than ever that Canadians march for life, says Jim Hughes, president of Campaign Life Coalition.

“Considering the fact that our rights are being taken away on a daily basis, it’s absolutely essential that we be here, that we speak up, that we not back down, and that when we return home that we become the lights in the darkness, telling everybody what’s happening and continuing the fight,” he told LifeSiteNews.

“Now is the time to commit, or for those of us who have been involved for many years, to recommit to do all we can to protect children in the womb. Now is the time to March for Life, and declare that we are, without question, ‘Pro-life All. In,’” he said.

The March for Life events begin Wednesday with prayer services and a pro-life Mass at 7:30 p.m. A candlelight vigil for the victims of abortion at the Human Rights Monument is scheduled from 9:00 to 10:00 p.m., followed by all-night Eucharistic Adoration at St. Patrick’s Basilica.

The day of the march begins with four Catholic Masses, a Reformed Christian prayer service, and an Anglican worship service held at various locations throughout the city at 10:00 a.m.

The Parliament Hill rally begins at 12:30, with LifeSiteNews co-founder and Editor-in-Chief John-Henry Westen as master of ceremonies.

The march begins at 1:00 p.m., and concludes with Silent No More testimonials, and a prayer services by the Eastern Catholic Chaplaincy of Ottawa.

AUL’s Glenn Foster is keynote speaker at Thursday night’s Rose Dinner, while Paul J. Kim will speak at the youth banquet held at the same time. An all-day youth conference is scheduled for Friday.

For more information, go to the March for Life website here.