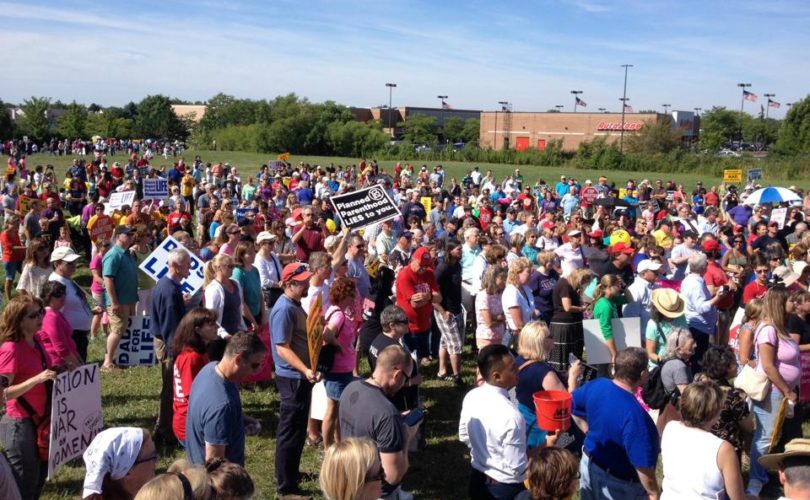 Courtesy of the Pro-Life Action League

WASHINGTON, D.C., August 24, 2015 (LifeSiteNews) — In what is being billed as the largest pro-life protest in history, thousands of pro-life Americans gathered at more than 300 Planned Parenthood clinics around the country.

“Hundreds peacefully and prayerfully witnessing to the sanctity of all human life at Planned Parenthood Boston!!” posted Colleen Donohue on the official Pro-Life Action League Facebook page for the rallies.

Monica Miller, the director of Citizens for a Pro-Life Society, was an organizer of the rallies. In a statement to USA TODAY, she said that “we want to draw attention to the injustice of legalized abortion.”

“The American public needs to be awakened to the atrocity of what is happening to innocent unborn children,” she said.

On Friday, Students for Life of America president Kristan Hawkins said, “This is the turning point in the history of abortion in our nation and our time to speak out, to have our pro-life message of hope and love for both woman and child heard by the media. Women have been betrayed and Planned Parenthood has sold them and their preborn babies out, all for profit.”

The Washington Post reported on a number of Tweets identifying protests. Pro-life blogger and Susan B. Anthony List National Campaign Chair Jill Stanek Tweeted that 1,600 people were in Aurora, Illinois, and “hundreds” were reported to be in southeastern Houston. At least 350 people joined in Plano, Texas, and 600 in Columbus, Ohio.

Plano #ProtestPP growing to over 350 folks. Where are you standing for life?? @ADFmedia @LilaGraceRose @LiveAction pic.twitter.com/nS1wm9Sl8e

This is some of the 850+ protesters spread around several city blocks around @PPact in Falls Church, VA. #ProtestPP pic.twitter.com/wMO2JszHJQ