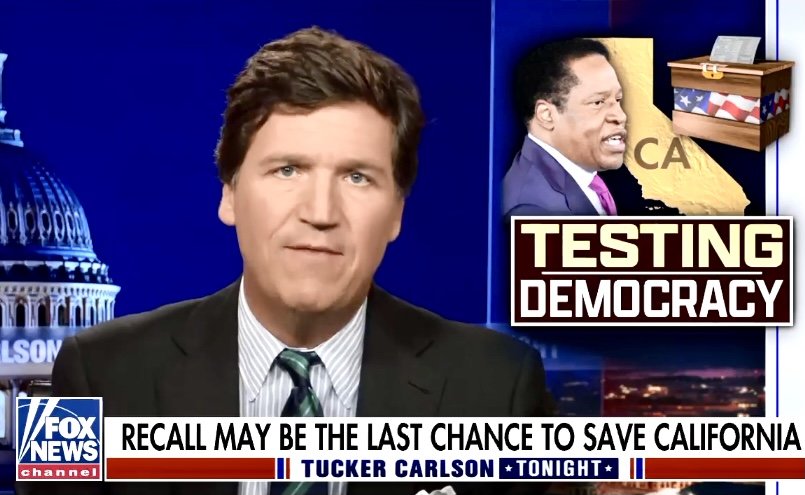 (LifeSiteNews) — California Gov. Gavin Newsom is the subject of a recall ballot as citizens seek to wrest the once-land of milk and honey, opportunity and prosperity from the control of a Democrat who has overseen his state’s demise since taking office.

The recall initiative that culminates September 14 has become a battleground as frightened progressive activists and establishment Democrats seek to halt the ongoing recall vote while conservative Republicans justifiably fear that the integrity of the balloting will be undermined by those seeking to keep Democrats in power at all costs.

The magnitude of progressive Democrat fear is increasing daily and most visible in their attacks on Larry Elder, a black conservative and beloved radio show host who is the Republican’s leading contender to replace Newsom if the recall effort is successful.

The left-leaning Los Angeles Times recently ran a commentary claiming that Elder is the “Black face of White supremacy.”

“This is not the first time the L.A. Times has attacked me. There is another writer who all but called me a Black David Duke,” Elder told Fox News host Steve Hilton. “They are scared to death.”

David Duke, it should be noted, is a former grand wizard of the Knights of the Ku Klux Klan.

MSNBC has likewise targeted Elder. Liberal Hollywood celebrity Rob Reiner called Elder a “maniac,” and verklempt Bette Midler told her liberal fans, “Larry Elder has a shot at winning,” so “you have to vote like hell!”

“It’s … about something bigger than just one state,” declared Fox News host Tucker Carlson in his Tuesday night monologue. “This recall is a test for democracy.”

“The question is: Do elections still have meaning? Are voters allowed to choose their own leaders?” wondered Carlson. “Or does the L.A. Times get to do that? Does the party apparatus get to do that? Do we have any power at all as citizens? Or are they going to steal it from us?”

“If the answer is ‘they’re going to steal it from us,’ we’re in trouble,” he said. “Once citizens conclude their votes are meaningless, they quickly become radical. Democracy is the safety relief valve that keeps our society placid. But when people think it’s fake, they go bonkers. They have no option. They have no power. They have nothing to lose.”

“It’s in all of our interests that the state of California conducts a free and fair election next month. Yes, with outside election observers. U.N., you’re welcome, too. Why? Because there are indications it won’t be free and fair,” he concluded.

“Talk about a close election! Galvan won his City Council race in 2021 by only one vote, 855 to 854,” wrote Hans A. von Spakovsky, the Heritage Foundation’s election law reform initiative manager and senior legal fellow. “Not only have all of the defendants been charged with conspiracy to commit election fraud, but Galvan is also accused of attempting to bribe an election official with concert tickets to ‘influence’ the outcome of the election.”

“Giving those who have a stake in the outcome of an election the lawful ability to possess and handle ballots is simply asking for trouble and putting temptation in front of those who are willing to cheat to win an election,” he said.

Harmeet K. Dhillon, co-chair of the Republican National Lawyers Association and a California resident, filed a lawsuit yesterday hoping to head off Democrat efforts to halt the recall effort.

“I filed a lawsuit to intervene in a challenge to the constitutionality of the recall statute because frankly I don’t trust the secretary of state or the attorney general who are both appointed by the governor to defend him in this regard,” Dhillon explained in an interview with Carlson.

Democrats “are playing fast and loose,” said Dhillon. “We’ve seen some alarming scenes of 300 ballots bundled together in the car of a person with a gun and some drugs and so we are definitely looking into all of these issues.”

The lawsuit notes that the party seeking to halt the recall vote has a “distorted theory of democracy,” believing that “the Court should overturn a 110-year-old provision of the California Constitution to stop an election out of fear that the majority of California voters may decide that they want to recall their Governor.”

“With Larry Elder closing in on the California governorship, shouldn’t we be seeing lots of CNN and MSNBC stories about how historic it would be for him to win?” asked Scott Adams, creator of the Dilbert comic strip, in a tweet.

“When did we stop crowing about electing the ‘first black’ whatever?” wondered Adams. “Does it not apply to Republicans?”

With @larryelder closing in on the California governorship, shouldn’t we be seeing lots of CNN and MSNBC stories about how historic it would be for him to win?

When did we stop crowing about electing the “first black” whatever? Does it not apply to Republicans?

During the 2020 presidential campaign, then-candidate Joe Biden famously scolded an African American video audience, “If you have a problem figuring out whether you’re for me or Trump, then you ain’t Black.”

Biden and Harris slated to campaign against the recall: ‘No more democracy for you!’

“It’s not even a partisan point, Gavin Newsom is a terrible governor,” noted Carlson in a video clip tweeted by Elder. “Look at the state he leads: It has gotten demonstrably, visibly worse by every measure during the years he has led it.”

“He is doing a terrible job, so you would think that even leaders of the Democratic Party, his party, would be very happy that he could be leaving, but they are not. They are doing everything they can to keep him in office,” said Carlson.

“They are going so far as to endorse the job he is doing if you can imagine. Imagine the bile they have to swallow to do that, because they are not blind, and they see what he has done. Joe Biden and Kamala Harris are now set to campaign against the recall: ‘No more democracy for you!’”

“You have to wonder, will the state survive this? Will there be a free and fair election?” asked Carlson. “Everyone is watching.”

“I can tell you, even living in my latte-sipping, avocado toast-eating, Lululemon-wearing neighborhood in San Francisco, people are fed up with the crime, the drugs, the homelessness, the intermittent electricity and everything else that is wrong with California, so people want a change here,” Dhillon said.