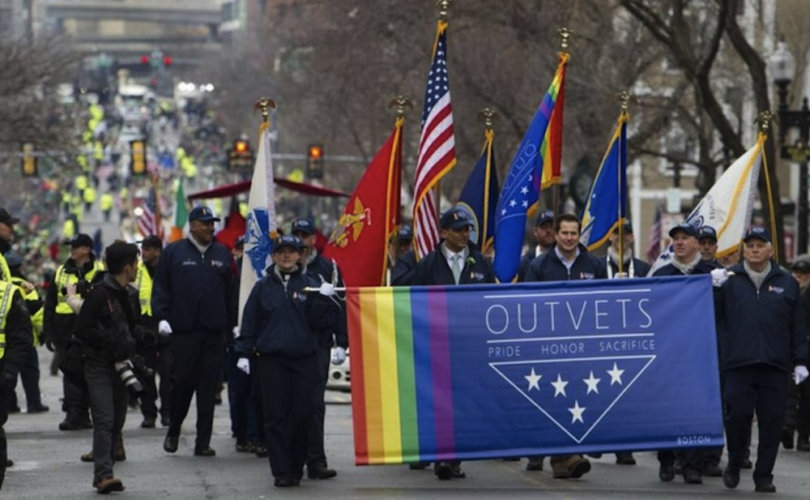 According to parade officials, Boston Police said homosexuals bused in from other states to “disrupt” the festivities were a serious threat unless Catholic organizers permitted a gay veterans group in the parade.

Police not only determined the gay threats were “credible” but warned that they would not guarantee the safety of the public, including children. It was also implied that organizers would be responsible if gay violence erupted.

Duross told the New Boston Post that he sought support from Cardinal Sean O’Malley, the archbishop of Boston.

“I asked the Catholic Church to help,” Duross said. “No comment. Wouldn’t comment on it. Didn’t want to get involved.”

Two weeks before the parade, the Allied War Veterans Council voted to ask OutVets not to display their gay rainbow flag. And then the threats came.

Council member Philip J. Wuschke Jr. explained that Duross learned of the validity of the threats when the Boston Police Commissioner’s office not only confirmed them as real but warned of “possible deaths” and implied they could not contain such violence.

According to Wuschke, police said that unless Duross allowed the homosexuals to march, they would probably have to cancel the parade.

The pro-family group MassResistance confirmed the following information with other parade officials:

According to the Catholic Action League, Boston Police told the council they could not contain rioters or maintain a secure perimeter around the parade route and that the Allied War Veterans Council would be responsible for any violence. Police also threatened to cancel the parade.

“One of the most disturbing aspects of this controversy is that the leadership of the Boston Police now seem invested in implementing the political agenda of the Walsh administration,” Catholic Action League executive director C. J. Doyle said. “Does the rule of law still apply?”

There have been other instances of violence carried out against social conservatives without police intervening. In 1990, homosexuals threw condoms on priests and jumped on cars outside Holy Cross Cathedral. In 2005, rioters went unstopped outside Tremont Temple.  In 2001, Occupy Boston took over downtown. In 2012, Tea Party members were terrorized at Boston Commons.

“Boston used to be called 'The Cradle of Liberty,'” Doyle noted. “Now, it resembles a banana republic, with a Peronist mayor.”

The bottom line is that Duross felt he had no choice but to acquiesce to the gay demands.

“If anybody got hurt because of this, I wouldn’t be able to live with myself,” he said, adding that he had been harassed and threatened personally.

“If groups critical of homosexuality threatened violence toward a gay pride parade, they would be investigated by the FBI for everything from federal hate crimes to domestic terrorism,” MassResistance president Brian Camenker pointed out. “The U.S. Attorney's office needs to investigate these reports to determine if the civil and constitutional rights of parade organizers were violated.”

Sodomites' fight for an honored place in the Christian parade has been going on for decades. The Allied War Veterans Council took their case to the U.S. Supreme Court in 1995 and unanimously won the right to exclude groups that stand against Catholic morals.

But legally-won and recognized Constitutional rights have not stopped gay activists from pressuring for inclusion.

In 2014, newly-elected Walsh put on a full-court press on behalf of gays, including threatening to rescind the parade permit and threatening any city employee helping or marching in the parade.

“This is sheer thuggery by the Walsh administration,” Doyle commented. “A nine to zero U.S. Supreme Court decision has been, effectively, vacated by a city government engaging in unlawful threats, bullying, intimidation, ruthless pressure tactics, and the use of law enforcement to coerce citizens into forfeiting their constitutional rights.”

In 2015 and 2016, new Council commander Brian Mahoney betrayed the Catholic group and held an unscheduled vote without all members in order to include homosexual groups. Several Catholic schools and groups refused to participate those years.

Upon the death of Mahoney late last year, Bill Desmond became Council commander, and the original Christian nature of the parade was secured. That is, until threats of “potential deaths” caused Duross to give in.

“The 'gay rights' movement is further revealing that their agenda has never been about expanding rights but rather demanding special treatment for homosexuals, transgenders, and other paraphilias while diminishing the First Amendment rights of everyone else,” California MassResistance's Arthur Schaper told LifeSiteNews.

“This movement is not about civil rights but about perpetrating civil wrongs,” Schaper said. “If individuals refuse to capitulate, accommodate, and embrace the LGBT agenda, they can now expect violent threats from these vicious thugs.”

“And now elected officials in major cities refuse to protect their own citizens from the Thuggocracy of the LGBT Left!”

“It's time for Americans to fight back against this movement, which was founded on a lie, and is now persecuting the decent and law-abiding citizens,” Schaper said. “I urge every concerned American to contact the Mayor of Boston's office and also send complaints to the Boston Police Department and the federal Department of Justice.”

Christianity has always taught that sodomy is not healthy but is a harmful “abomination” against the created order. The Catholic Church specifies that same-sex attraction is an “intrinsic disorder” and acting on it is a serious sin.

“It seems pretty clear to me that St. Patrick needs to come to America and cast out more serpents,” Schaper concluded.