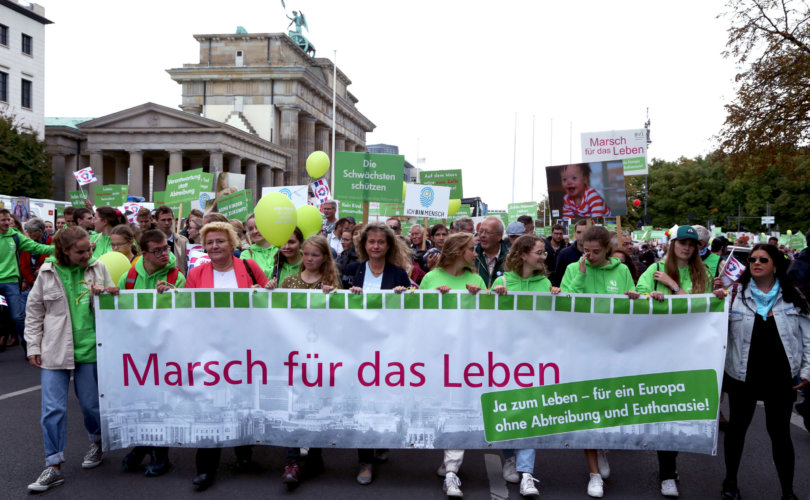 BERLIN (LifeSiteNews) — At the 18th March for Life in Berlin on Saturday, September 17, about 4,000 people, including three Catholic bishops and the founder of the Democrats for Life of America movement, took to the streets to protest abortion and euthanasia in Germany’s capital.

In written greetings, several bishops thanked the participants in advance for their commitment to the protection of life, including the head of the Catholic Bishops’ Conference, Bishop Georg Bätzing, and Cardinal Rainer Maria Woelki of Cologne.

In a speech before the March, Lindner criticized the efforts of the United Nations to establish abortion as a “fundamental right.” She defended the new regulations on abortions in Hungary, where women must obtain a certificate confirming that they have listened to the heart tones of their child before having an abortion.

Bishop Voderholzer said that he is committed to the right to life of the unborn, which is protected by the German constitution but is increasingly being called into question by various parties. Voderholzer has also made strong pro-life remarks in a recent interview.

Hubert Hüppe, a member of the German parliament from the CDU, warned that many people could face pressure to commit suicide in order to relieve relatives under the planned assisted-suicide regulations. Furthermore, he cautioned against “turning women into birthing machines” by allowing surrogate motherhood.

At the opening panel, the organizers also introduced Terrisa Bukovinac, the founder of the Democrats for Life of America movement that represents a minority position on the abortion issue in the U.S. Democratic Party. Bukovinac condemned abortion as “global genocide” and called for non-violent resistance to it.

Similar to previous years, there were counter-protests to the March for Life, with participants calling for unrestricted access to abortion and disrupting the march with slogans and whistles.

The organizer of the March was the Bundesverband Lebensrecht (BVL), an association of 16 mostly Christian organizations. BVL says that around 4,000 participants were present at this year’s March for Life Berlin. The annual march is the largest rally for the protection of life in Germany, according to BVL.