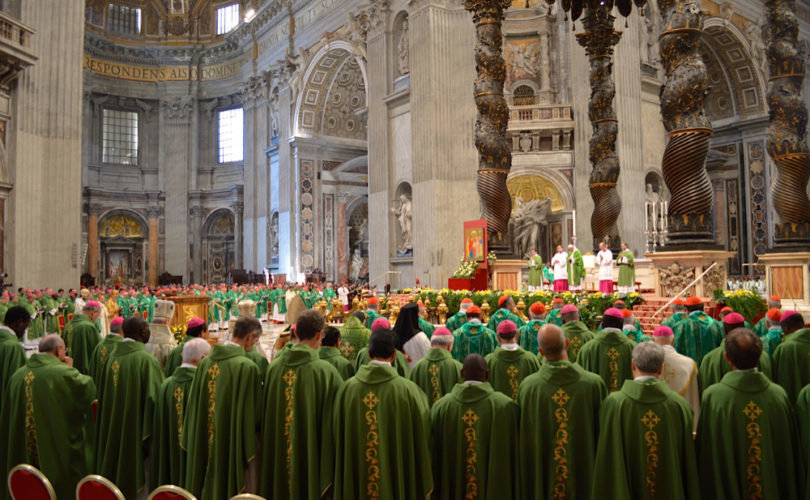 ROME, May 29, 2015 (LifeSiteNews.com) — “The Synod is a solely consultative assembly that has no Magisterial weight in and of itself.” “Neither the Synod of Bishops nor any other Church authority has the competence to change the doctrine of the Church.” Those are a couple of the hard-hitting quotes in a newly released book penned by three bishops and endorsed by another four, one of whom is a retired Vatican cardinal. LifeSiteNews has obtained a copy of the book, which is available in several languages and will be sent to all of the world’s bishops.

“Preferential Option for the Family — 100 Questions and Answers Relating to the Synod” was authored by Santa Rosa Bishop Robert Vasa, Bishop Athanasius Schneider of Astana, Kazakhstan, and Archbishop Aldo de Cillo Pagotto of Paraiba, Brazil. The guidebook on the Church’s teaching on marriage and the family, released in an effort to counter the confusion surrounding the upcoming Synod on the Family was also endorsed by Cardinal Jorge Medina Estevez, Prefect Emeritus of the Congregation for Divine Worship and the Discipline of the Sacraments, Italian Archbishop Luigi Negri, Belarus Archbishop Tadeuz Kondrusiewicz, and Ecuador Bishop Patricio Bonilla.

Bishop Vasa explained the need to restate Church teaching with the publication as the book was released in Rome last week. “There is nothing new or revolutionary in this book,” the bishop said. “We just simply felt that, in light of the upcoming synod on the family, it was time to reiterate those things the Church has clearly and consistently taught.”

Addressing questions about the teaching of the Church being out of touch with the modern world, the bishops reply, “If the faithful no longer understand a moral doctrine, the blame does not fall on the doctrine but above all on those who should teach it in a clear and convincing way.” It adds, “The historical transformation of society is a result of cultural and moral errors. The Church should not adapt to these errors or their consequences but rather identify, denounce and remedy them. Therein lies a real ‘update’ of her ministry.”

Last year’s Extraordinary Synod on the Family was marked with chaos and confusing communication reports, coupled with media misrepresentation of Church teaching, as opposing orthodox and liberal flanks among synod fathers skirmished over marriage, divorce, family, and homosexuality.

While some at the 2014 Synod suggested admittance of remarried divorcees to communion, the book counters: “Adultery is objectively a grave sin and as such can be forgiven if the sinner has manifested not only a sincere repentance but also a purpose of amendment, that is, of ending the adulterous behaviour.”

A book written by five cardinals in support of the Church’s teaching on marriage and family in advance of last year’s synod and sent to synod participants was intercepted on the orders of Cardinal Lorenzo Baldisseri, secretary general for the Synod of Bishops, on the basis it would interfere with the synod.

The turmoil continues as this year’s October Synod approaches, with a confidential meeting conducted this week at the Pontifical Gregorian University, with select bishops, theologians and members of the media, apparently aimed at influencing the upcoming Synod toward acceptance of homosexual unions.

British Voice of the Family spokesman and pro-life veteran John Smeaton spoke at the book’s release, calling it a “wonderful publication” that addresses the “confusion of ordinary Catholics, formed in the faith but overwhelmed by the cultural whims of the sexual revolution.”

“It provides us with a language with which to speak to young people about marriage, faithfulness, chastity and salvation,” said Smeaton. “It gives us a sense of the power of God, of his grace, which brings true human happiness.”

Divided into one hundred questions and answers, it covers many areas, including sexuality, indissolubility of the marriage bond, divorce, homosexuality, declaration of nullity of canonical marriages, communion for the divorced and remarried, mercy, and pastoral policy.

Along with letters of praise from a number of bishops internationally, “Preferential Option for the Family’s” preface was written by Prefect Emeritus of the Congregation for Divine Worship Cardinal Jorge Medina Estévez, who recognized that the family finds itself in a “real and profound crisis.”

“Facing this reality, it would not be a wise attitude to ignore or minimize this crisis,” the cardinal wrote, and the Church must “evaluate its scope and magnitude and strive to find ways to overcome it. This is the goal pursued, with realism and hope, by this booklet.”

“Preferential Option for the Family” is published by the association behind the Filial Appeal, which requests more clarity from Pope Francis on Church teaching in these areas.

The appeal has been signed by more than 250,000 people worldwide, with a number of cardinals and roughly two-dozen bishops and archbishops taking part, including the book’s authors, along with various academic and public figures.

A copy of the book can be requested at [email protected].